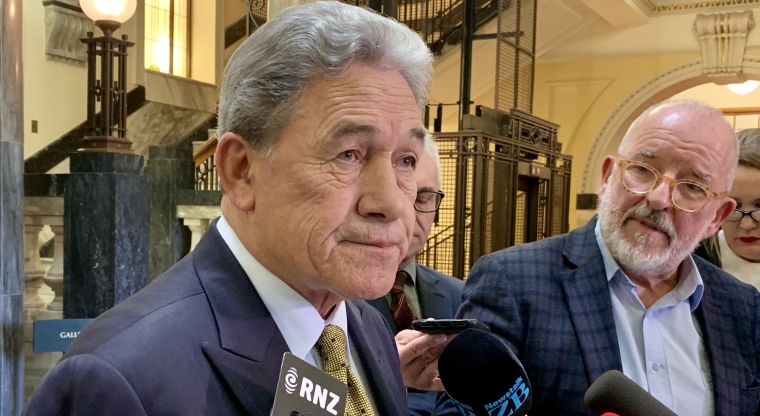 Delivering a speech at the Centre for Strategic and International Studies Washington on Wednesday, Peters highlighted the opportunities the US was missing out on.

He emphasised both the economic benefits of a bilateral trade agreement, as well as the “strategic and symbolic” significance, saying it would indicate to the Indo‑Pacific community “that the US is in the region to stay”.

“It would signal that US involvement in the region will be broad and comprehensive, with an ambitious economic programme to mirror the US’s strategic and security objectives,” Peters said.

In the same breath, he talked up the fruitfulness of NZ’s free trade agreement with China - the superpower that would perhaps be most interested in these “security objectives”.

While once a critic of the NZ-China FTA, which is slowly being upgraded, Peters said it had seen trade between the two countries triple in a decade.

“While we seriously admire the boundless creativity and innovation that comes out of the US – particularly your truly amazing ICT companies – the reality is that the US also remains a huge producer of more traditional goods and services, much of which is destined for export markets,” Peters said.

“And this is where we have the real concerns for the US’ future prosperity.

“While most countries in Asia have been actively negotiating trade agreements between them, with the staggering economic growth of China one obvious symbol of the greater trade engagement seen across Asia, the US has in the last 20 years only negotiated three FTAs in Asia: with Australia, the Republic of Korea, and Singapore.

“While these are significant countries in the region, they are by no means the biggest economies. In fact, taken together these three countries represent just 12% of Asia’s GDP…

“Notwithstanding the fact that US exports to the world have grown by 5.3% on average per year since 1990, the share of US’ total exports to NZ over the same period dropped from nearly 18% to 10%.

“During that same time, imports from our regional partners with whom we have FTAs have grown in relative importance.

“By example, China’s exports to NZ have grown on average by 17% per year, and China's share of total exports to NZ has grown from 1% to 20% during that time, becoming our largest source of imported goods.

“This trend is even more marked for the US’ share of imports across Asia.

“That means that the US has lost half of its market share over a 28-year period, and gives you a sense of the significant scale of lost opportunities for US exporters and workers."

Peters acknowledged the US pulling out of what was originally the Trans-Pacific Partnership, saying before amendments were made to get the multilateral trade agreement to where it’s at now, “many of us in NZ had similar reservations”.

“Although some were disappointed [by the US]… we understand and respect the right of your administration to make this decision,” Peters said, recognising President Donald Trump’s preference for bilateral agreements.

He pointed out how US Vice President Mike Pence last year conveyed Trump’s offer ‘to make bilateral trade agreements with any Indo-Pacific nation that wants to be our partner’.

“We stand here to say NZ is uniquely ready in our fulsome record and attitude to “free and fair” trade to take up the President’s offer," Peters said.

I guess he has to say a few words. As few as possible to justify the junket.

If only I’d known I could’ve made some invitations available
Sadly Trump is more concerned with 2020 than exports to NZ
I have however alerted The Whitehouse
Sadly he missed The Kentucky Derby, The Preakness & The Belmont .....he would’ve loved the races

Over my roughly 50 years of being a global macro investor, I have observed there to be relatively long of periods (about 10 years) in which the markets and market relationships operate in a certain way (which I call “paradigms”) that most people adapt to and eventually extrapolate so they become overdone, which leads to shifts to new paradigms in which the markets operate more opposite than similar to how they operated during the prior paradigm. Identifying and tactically navigating these paradigm shifts well (which we try to do via our Pure Alpha moves) and/or structuring one’s portfolio so that one is largely immune to them (which we try to do via our All Weather portfolios) is critical to one’s success as an investor.

There are always big unsustainable forces that drive the paradigm. They go on long enough for people to believe that they will never end even though they obviously must end. A classic one of those is an unsustainable rate of debt growth that supports the buying of investment assets; it drives asset prices up, which leads people to believe that borrowing and buying those investment assets is a good thing to do. But it can’t go on forever because the entities borrowing and buying those assets will run out of borrowing capacity while the debt service costs rise relative to their incomes by amounts that squeeze their cash flows. When these things happen, there is a paradigm shift. Debtors get squeezed and credit problems emerge, so there is a retrenchment of lending and spending on goods, services, and investment assets so they go down in a self-reinforcing dynamic that looks more opposite than similar to the prior paradigm. This continues until it’s also overdone, which reverses in a certain way that I won’t digress into but is explained in my book Principles for Navigating Big Debt Crises, which you can get for free here.

“We stand here to say NZ is uniquely ready in our fulsome record and attitude to “free and fair” trade to take up the President’s offer," Peters said."

But you know that your boss has reduced the chance of a free-trade agreement with the US to nil with her ill-advised and repeated jabs and insults.

New Zealand who? Thus quoth President Trump. Who went on to say. Oh yes now that you remind me didn’t I have a girlfriend from there once? So I do actually have deep knowledge about the subject, despite myself.

how about you focus on NZs prosperity WP

He's worth his wage for the entertainment value alone. Go Winnie! You show 'em boy.

In my view Peters’ comments were all sensible, backed up with facts, and befitting of diplomacy. But is seems a lot of people here just want to play the man and not the ball. If Peers says something stupid, by all means criticise what he said. So, go ahead and make a cogent criticism of what he says. Then you are making a positive contribution to the debate here. And we can all benefit.

I've been quietly impressed by Peters lately. He seems to do well in the position he's in now.