Two super powers are about to meet as distrust between them builds. Decisions at these meetings could have consequences for New Zealand. Minxin Pei assesses the pressures

Two super powers are about to meet as distrust between them builds. Decisions at these meetings could have consequences for New Zealand. Minxin Pei assesses the pressures
22nd Sep 15, 11:11am
by Guest 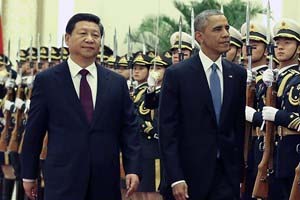 As Chinese President Xi Jinping begins his trip to the United States in Seattle, home to many of the world’s leading technology firms, most observers are looking ahead to his subsequent meeting with President Barack Obama.

Can the summit reverse the downward spiral in US-China relations that began with Xi’s accession to power in 2013?

Few dispute that the world’s most important bilateral relationship is in deep trouble.

From the US perspective, China’s reckless behavior in the South China Sea, unrestrained cyber attacks against American targets, protectionist economic policies, and escalating political repression at home have demolished the belief that a globally integrated China would be a responsible and cooperative partner. Indeed, recent Chinese actions directly challenge vital American interests and core values.

Chinese leaders, for their part, view America’s strategic “pivot to Asia” as a thinly veiled step to tighten its geopolitical containment of China. Moreover, they have become obsessed with US dominance in international finance and technology and, most important, America’s ideological commitment to liberal democracy, which they regard as an existential threat to the Chinese Communist Party (CCP).

The toxic mix of mutual mistrust and tit-for-tat behavior has brought Sino-American ties to their lowest point since the Tiananmen Square massacre of 1989. There is now widespread concern that the US and China may be headed for a new cold war.

For Xi, the stakes of his US trip could not be higher. To maintain his domestic image as a strong leader, he must stick to his nationalist rhetoric and policies. But he also needs to stabilize the all-important relationship with the US.

Judging by recent moves by China and the US, we can expect modest success in a few contentious areas. While such improvements, on their own, will not change the relationship’s adversarial dynamic, they may halt the deterioration in bilateral ties, at least for now.

On the eve of the summit, both the US and China took positive, albeit symbolic, steps to demonstrate their goodwill and improve the diplomatic atmosphere. The US extradited a low-level Chinese official to face corruption charges. The Obama administration also decided not to announce sanctions against Chinese entities and individuals allegedly involved in cyber attacks on American companies and government agencies.

For its part, China released a human-rights activist and dispatched a high-level delegation to the US to discuss cyber security. In fact, the two sides are reportedly negotiating a landmark deal that would prohibit cyber attacks against each other’s vital infrastructure. An agreement on the issue could be the most important outcome of the summit, although other types of cyber attacks are unlikely to be covered by it.

For China, the biggest prize is a bilateral investment treaty (BIT). In practical terms, a US-China BIT would make it easier for Chinese entities to invest and operate in the US and increase American firms’ access to Chinese markets.

Such a deal would be a near-term boon for Xi, because it would represent a vote of confidence by the US in China’s struggling economy. But the prospects for a BIT are uncertain, at best. The US Congress is deeply skeptical, and the American business community needs convincing as well. Both have been bitterly disappointed by China’s mercantilist trading policies after its accession to the World Trade Organization. Given how many contentious issues remain unresolved, an accord is unlikely during the summit.

The South China Sea dispute may prove to be the toughest diplomatic nut to crack. China has staked its national prestige and its leadership’s nationalist credentials on this issue, which means that Xi is likely to rebuff US demands that China cease all activities seen as militarizing its new artificial islands in disputed waters. The most that can be realistically expected is an insipid statement of the two sides’ agreement to disagree.

But the most politically sensitive topic for China has little to do with cyber security or the South China Sea. It is China’s ongoing crackdown on civil liberties and human rights.

Facing enormous domestic pressure, Obama has announced that human rights will be on the agenda of his summit with Xi. But Xi is unlikely to make any concessions, because doing so could damage his political standing within the CCP and undermine a central component of his political vision: the reassertion of political control over a dynamic society.

Ultimately, the key question looming over the summit is whether Xi will be able to offer enough to repair the damage done to Sino-US relations in recent years. To be sure, trying is better than doing nothing. But what really matters is whether, after the summit, China takes concrete actions that reflect a genuine shift from the policies that have fueled the deterioration in bilateral ties.

Minxin Pei is Professor of Government at Claremont McKenna College in Clairmont, California, and a non-resident senior fellow at the German Marshall Fund of the United States. This content is © Project Syndicate, 2015, and is here with permission.

I predict this article will attract no more than 10 comments because active commentators here are immigration and housing price enthusiasts.

I will add an extra comment as it is may make the top 10. Well it might top it up.

Personally I think Mr Obama should consider taking a leaf out of Mr Keys book and panda to the zoo-illogical items on his guests hidden agenda whilst pondering and pandering over the WTO and other BITs on the side..

Though I do think Summit is up with the thinking therein. as the leaves required to keep the issue alive leaves a lot to be desired, no matter how you stack up the influx and migrate ever upwards....though why Wellington and not Auckland for NZ is my first thought, on that matter.

I do think some are clutching at straws and hoping for a fair return on milking the Asian billions, whilst costing us all millions willy nilly, involved in pleasing Asia once again, but we are islands and continents apart in lateral thinking and literal gain.

Trillions have been thrown at the problems and we are still indebted to others to maintain the float and the Prime Minister's and Presidents personal perspectives have really achieved little, but that might grow and inflate as some all pray. Some have even bet their houses on it.

There is no interest in gain, for non-inflationary benefits as per the rates we continually drop at. It may be negative to say so, but I think we can bank on it that it will always be so, going forwards

Anti-trust and hacking aside, do we really need to panda to others to maintain equilibrium, or should we inflate their ego some more and vote for more of the same.

I have tried to be diplomatic and no casual, nor causal racist remarks. But we should all open our eyes to reality.

If you have to pander to gain a panda, is that State corruption or is that just the cost of doing State business these days.

Whose business is it anyway?.

China and America relations will not improve.

America has Russia, Iran then China, in that order, as their biggest threats.

The threat of course is to American world domination.

As long as America believes it is, and should always be, the worlds only global power China and Russia will remain on the threat list.

I hope you are right about the USA. Only one of the two global super powers is not afraid to utter the words "human rights".

If the US turns inwards we will be the worse for it. We sure as heck won't be able to post direct criticisms of regimes on web forums.

China's nine dashed line laying claim to nearly all the China Sea right up to the coastlines of Phillipines, Vietnam and other Asian states could be the Lebensraum that Adolf wanted at the start of WW2. Surprised they didn't lay claim to the Tasman sea also but maybe they will be taking charge of that in other ways.

I just saw this this morning about Air New Zealand being pressured to buy British instead of American back in the 1960s. If we didn't then our primary produce market in Britain could be at risk.
Sometimes I wonder why China, with whom we have a free trade deal, suddenly stopped buying our dairy products. There must be a reason. Anyway, a thought provoking headline.

It is a reminder of the "buy British" debate... We needed to support the Empire. The airline fought an even fiercer political battle in the mid-1960s over the choice of a jet aircraft for the main trunk route. Issues of access to the British market for primary produce cut across the airline’s firm preference for the American Boeing 737. Confident in its judgement after the success of the Fokker Friendship, the airline held its ground against pressure for the British BAC 1-11. The jet age in domestic services began in 1968 with the delivery of the first Boeing. The airline’s choice was again confirmed by the spectacular longevity of the Boeing 737 series - http://www.teara.govt.nz/en/aviation/page-8