The specter of harsh accusations and harsher punishment is stalking China’s political, intellectual, and business elites, even affecting the inner sanctum of the Chinese Communist Party

The specter of harsh accusations and harsher punishment is stalking China’s political, intellectual, and business elites, even affecting the inner sanctum of the Chinese Communist Party
9th Feb 16, 4:02pm
by Guest 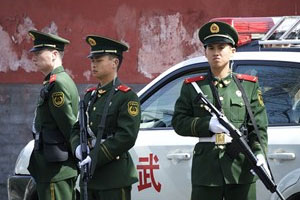 China is once again gripped by fear in a way it has not been since the era of Mao Zedong.

From the inner sanctum of the Chinese Communist Party (CCP) to university lecture halls and executive suites, the specter of harsh accusations and harsher punishment is stalking China’s political, intellectual, and business elites.

The evidence of pervasive fear is easy to discern. Since President Xi Jinping’s remorseless anti-corruption drive began in December 2012, arrests of government officials have become a daily ritual, sending shivers down the spines of their colleagues and friends.

Seniority offers little protection, as 146 fallen “tigers” (officials holding the rank of minister or provincial governor) have found out, often being hauled off without warning. A new phrase has even been added to the Chinese lexicon to describe this sudden fall from grace: miaosha, or “instant kill.”

But fear is taking an even bigger toll on lower-level officials, exemplified by proliferating reports of suicide. The media confirmed 28 such cases last year, though the actual number was most likely considerably higher. Concerned by this trend, the CCP leadership has now tasked local party organizations with gathering data on suicides by government officials since the anti-corruption drive began.

It is not just criminals who live in constant dread. With even routine approval of projects and requests potentially arousing suspicion, the Chinese bureaucracy is now paralysed by fear.

Beyond the bureaucracy, academics, human-rights lawyers, bloggers, and business leaders are also suffering. In universities, the government has recruited informers to denounce professors espousing liberal values in their lectures; several outspoken liberal academics have lost their jobs. Hundreds of human-rights lawyers have been harassed and arrested.

Many business leaders have gone missing temporarily, presumably detained by anti-corruption investigators. Among the highest-profile cases was that of the tycoon Guo Guangchang, China’s 17th wealthiest person, with a net worth of more than $7 billion. Guo was detained last December to “assist a judicial investigation,” and then simply appeared at his company’s annual meeting a few days later, with no explanation offered.

But perhaps the most alarming impact of the return of fear-based governance in China is that it is now affecting even outsiders. Not only are Western journalists, NGO representatives, and foreign executives living in fear; so, too, are executives, book publishers, and editors in Hong Kong, which, according to the “one country, two systems” arrangement, should lie outside Chinese jurisdiction.

In 2013, a British employee of the pharmaceutical giant Glaxosmithkline (GSK) was sentenced to two and a half years in prison on dubious charges relating to his investigation firm ChinaWhys; the following year, his wife and business partner, a Chinese-born American citizen, received a two-year sentence on the same charges. Last December, a French journalist was expelled from China for an article about the authorities’ treatment of the Uighur minority. The next month, a Swedish NGO worker also was expelled, after being detained and accused of “endangering state security.”

Giant Western corporations, once wooed by China’s government, now fear police raids and anti-trust investigations. GSK was fined $500 million in 2014 for corrupt practices, one of the largest corporate fines ever demanded by China. Qualcomm, the American chipmaker, had to fork over nearly a $1 billion in fines to China for its “monopolistic” business practices last year.

More disturbing, five book publishers and editors in Hong Kong employed by the Mighty Current publishing house, which specializes in sensational stories about top Chinese leaders, have disappeared in recent months. Two were apparently abducted and taken to China against their will. One, a Swedish citizen, was forced to appear on Chinese television, implausibly claiming to have returned to China from Thailand of his own volition and asking that nobody try to help him.

Clearly, fear-based rule was not left behind with the end of the Cultural Revolution in 1976, as many thought. This should not be surprising. Even as China’s economy has boomed and modernized, its political system has retained its core totalitarian features: a state exempt from the rule of law, a domestic security apparatus with agents and informants virtually everywhere, widespread censorship, and weak protection of individual rights. Having never been repudiated, these institutional relics of Maoism remain available to be used and intensified whenever the top leadership sees fit, as it does today.

This should be triggering alarm bells in the West.

Indeed, rather than simply registering the return of fear-based governance in China as a factor shaping engagement with the country, Western leaders should be developing strategies for compelling China to rethink its approach.

With China’s international influence growing by the day, the revival of totalitarian scare tactics there has far-reaching – and deeply unsettling – implications for Asia and the world.

Some highlights from our Comprehensive Strategic Partnership:

4. The two sides intend to consolidate and expand practical cooperation in agriculture and animal husbandry, including strengthening understanding and cooperation in the area of product trade, in particular animal product trade, supporting the capability-building of China’s dairy sector... [Some of your stuff will do for a while.]

9. The two sides will develop and implement a long-term engagement plan for defence engagement, focusing on ongoing high-level and other bilateral visits, strengthened strategic communication, and expanded cooperation in training and exercises. [Chin up. We’re on the same side.]

11. The two sides will continue to work … with respect to joint efforts to combat cross-border crime, and to facilitate the recovery of the proceeds of crime within our respective legal frameworks. [Might interest a few property owners here.]