Fathom Consulting calls out official Chinese statistics that have become uncannily early, uncannily 'accurate', and uncannily close to the official forecast
2nd Oct 16, 9:53am
by Guest

Every lawyer worth her salt knows there is a way of phrasing questions that creates a trap for the witness. Questions like: "Have you stopped fiddling your taxes?" are designed to preclude any non-incriminating answer. And questions like: "What was it that first attracted you to millionaire Paul Daniels?" are designed to undermine any answer that doesn't conform to the 'clue' that is in the question.

It looks increasingly as though the survey that generates the official Chinese GDP data employs that kind of question - something along the lines of: "Did your firm's growth fall short of the official target to a degree that will encourage officials to look more closely at what you are doing?" That is a long, elaborate question, and in fact (of course) it is not phrased like that, but the implied threat could still exist.

At any rate, that is how it looks. Here's why.

First, official Chinese GDP data are published earlier in the quarter than in any other major economy - often within three weeks of the end of the preceding quarter. An astonishing performance on the part of the statistical agency in a huge, disparate economy of 1.4 billion people.

Second, revisions to Chinese GDP data are small by the standards of any other major economy and even by China's own historic standards. An astonishing degree of accuracy in the initial estimate - particularly such a quickly produced initial estimate.

Third, the outturns for Chinese GDP are astonishingly close to the official growth target - by the standards of any other major economy and by China's own historic standards.

Chinese statisticians were always fast, but they were not always this accurate or this close to target. Their performance 'improved' sharply after the global financial crisis ended, around 2009 / 2010. Unless and until the accuracy of the GDP data or their closeness to the official target start to look more 'normal' again, it is observationally equivalent between two hypotheses: first, officials are somehow manipulating the data; and second, statisticians have achieved a literally incredible improvement in the way they estimate the GDP data.

The chart below illustrates the 'performance' of Chinese statisticians and official forecasters in relation to the measurement of GDP over time. The closer to the bottom-left corner they get, the 'better' is their performance. Anywhere around the middle would be a 'normal' performance by the standards of other developing economies. In China, it has been an incredibly good performance in recent years. Almost, one might say, too good to be true. 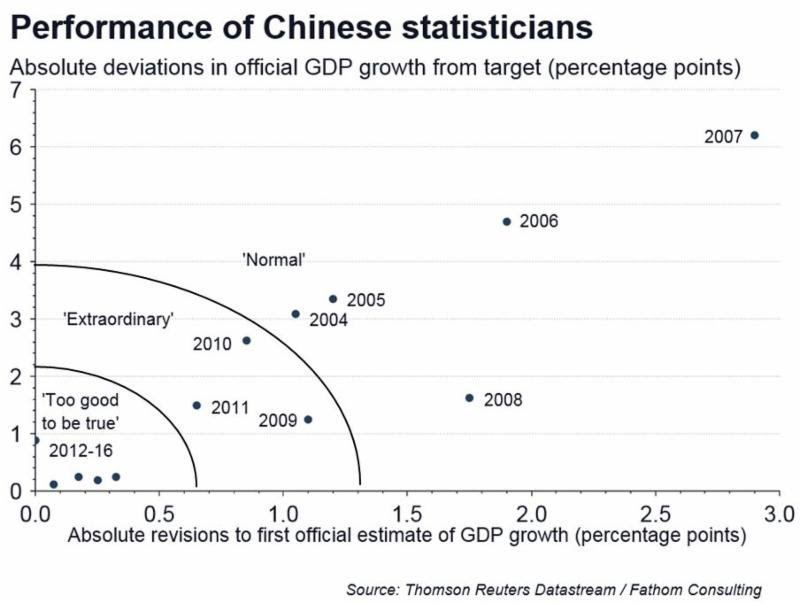 At Fathom, we compile our own measure of Chinese growth - the China Momentum Indicator, or CMI - using the indicators that Li Keqiang suggested (rail freight, electricity production and bank lending). The (literally) incredible improvement in the way the official estimates have performed suggests we should pay close attention to alternative measures of growth over the last few years, particularly since 2012. Coincidentally, that is when our alternative measure started to suggest the Chinese economy was slowing hard.

Leading questions are designed to encourage the respondent to give what the questioner judges to be the 'right' answer, or to undermine the 'wrong' answer if that is given. The evidence suggests that the 'right' answer to a question about growth in China is one that equals or exceeds the official growth target. The 'wrong' answer is one that falls below the growth target. As the chart below illustrates, there is a wide variance of errors in positive territory on the horizontal axis (where official GDP growth overshoots the target) but hardly any variance in negative territory (when official growth undershoots the target) - even though Fathom's CMI has a wide variance on the vertical axis in both territories. 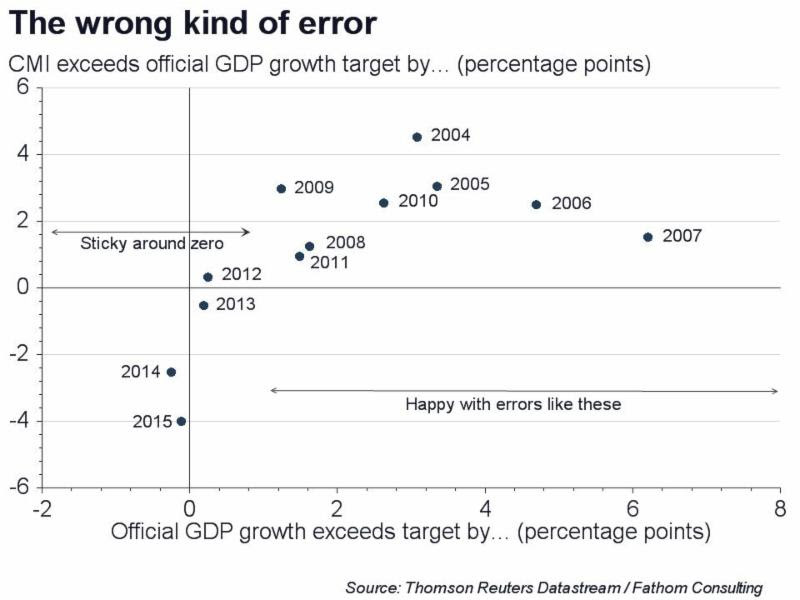 It's uncanny. It seems almost as though, no matter the true state of the Chinese economy, official growth will always equal or exceed the target. The question is, when did Chinese officials start manipulating the data? That, in case you didn't notice, is a leading question.

Fathom Consulting is a London-based research house supplying macro research and advice on the macro economy and financial markets to a number of the world’s leading corporate and financial institutions, governments and policy groups. This article is a re-post of an item in their "Thank Fathom it's Friday" column. It is here with permission.

Is the Chinese Communist party any different.....