Gloomy reports of anemic GDP growth in Japan have undermined investor confidence. But a more comprehensive look at Japan's economy provides strong grounds for optimism
27th Oct 16, 8:34am
by Guest 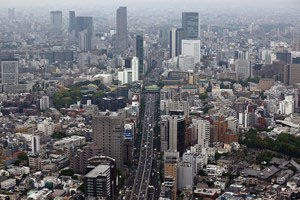 Tokyo is in the midst of a construction boom, with old high-rise office and apartment buildings being rebuilt in more modern and elegant forms, all while maintaining stringent environmental standards. So bright is Tokyo’s gleam – which is sure to impress visitors at the 2020 Olympic Games – that the city might seem like an anomaly, given gloomy reports that, after decades of stagnation, Japan’s GDP growth remains anemic.

In fact, even the small cities of Kushiro and Nemuro in Hokkaido, located near the disputed islands between Russia and Japan, are being rebuilt and modernized at a brisk pace, as is apparent to any tourist (as I was this summer). What explains this divergence between disappointing national economic data and visible progress in Japanese cities?

It may be a problem of calculation. According to official data, Japan’s economic growth slowed by one percentage point, in real terms, in the 2014 fiscal year. Yet, according to Bank of Japan researchers, tax data suggest that growth was more than three percentage points higher than the official figure, implying that GDP was some ¥30 trillion (about $300 billion dollars) larger than officially reported.

There is good reason to believe that it was. Tax data account for distributed GDP and cover a broader swath of economic activity than traditional measures of output. And, because few taxpayers have incentives to inflate their reported income, the resultant figures are unlikely to be overestimates.

More insights into Japan’s real progress can be derived from another source: the new System of National Accounts 2008, the latest international statistical standard for national accounting by the United Nations Statistical Commission. Tentative calculations using Japanese Cabinet Office data suggest that, according the standard of the 2008 SNA – which counts research and development, including intellectual property, among firms’ capital assets – Japan’s 2011 GDP exceeded the published data by 4.2%, or ¥19.8 trillion.

A third failing of traditional GDP measurements for Japan lies in the fact that they account only for what is actually produced within the country’s borders. But we live in a globalised world, and nowadays, Japan’s citizens are acquiring considerable income from Japanese activities abroad.

Given this, gross national income (GNI) might be a more accurate representation of Japan’s economic circumstances. In the 2015 fiscal year, Japan’s GNI grew by 2.5%, while its GDP grew by only 0.8%. Because Japan’s nominal GDP is now close to ¥500 trillion yen, the 1.7-percentage-point difference between GNI and GDP amounts to ¥8.5 trillion.

To be sure, foreign activities are not the only reason why GNI is growing more quickly than GDP. Even within Japan, many firms have lately been earning revenues at record rates, thanks largely to Prime Minister Shinzo Abe’s economic revitalization efforts. In fact, the gradual economic growth spurred by so-called Abenomics, together with the low exchange rate that has prevailed until recently, has helped to spur the tourism that has enabled cities like Kushiro and Nemuro to fund their reconstruction.

Taken together, the growth of Japan’s GNI and the implications of tax data and 2008 SNA suggest that Japan’s economy has been doing significantly better lately than the national statistics seem to suggest. Though each new calculation focuses on a different year, we can use them heuristically to estimate unaccounted-for economic progress in Japan.

The result is substantial: a ¥30 trillion annual adjustment for distributed income and ¥19.8 trillion adjustment for R&D and intellectual property. Add the GNI adjustment of over ¥8.5 trillion, and Japan’s economy is nearly ¥70 trillion, or 14%, larger than official data suggest. While this is only a rough calculation, it is impossible to deny the potential differences that more comprehensive calculations can make.

This has important policy implications. According to official statistics, which place Japan’s GDP at ¥500 trillion, Japan is still ¥100 trillion away from achieving a key goal of the second iteration of Abenomics: to achieve a ¥600 trillion economy. The revised reading of the statistics would reduce that shortfall by 70%. Simply put, Abenomics is not getting enough credit.

The incompleteness of the official view can be frustrating, especially as Japanese stocks suffer setbacks, even as Chinese stocks increase, despite the fact that, unlike Japan, China faces considerable hidden economic risks.

A more comprehensive and accurate representation of Japan’s economic progress is vital to give investors the confidence that Japan’s economy merits. That, in turn, would bolster the impact of Abenomics even further.

I have never understood the common depiction that Japan is failing. Clearly in relation to most other places they are rich. As for demographics, seems to me a stable population is a big advantage.

I agree. At around the time of the war they only had half the population they have now. We should all work on working out ways of doing more with less people, concentrating on quality over quantity.

"Koichi Hamada, Special Economic Adviser to Japanese Prime Minister Shinzo Abe, is Professor Emeritus of Economics at Yale University and at the University of Tokyo."

Yeah that guy isn't biased at all.

How can you not have a construction boom with the low cost of finance in Japan? You can get a 10 year fixed rate mortgage at 0.55%. Here 30 year mortgages are common, but in Japan 35+ years is not uncommon. Nothing quite like spending your future income and the income of your children/grand children to try to prop up Abenomics.

Don't be a sucker and believe this piece of propaganda.

I find Japan fascinating as a case study. As the author points out, there are continual doom and gloom stories on it (and negative interest rates shouldn't be sniffed at) but news stories like this based on experience on the ground seem like it's ticking along. Many of the economic stories on Japan (not this one) call for Japan to increase immigration - which seems nuts since they are 127m on an area not too different to NZ. They seem to be doing OK in managing a declining population - something the rest of the world can learn from.

Their infanticide and Xenophobia will defeat all contemporary attempts to fiddle the nations books. As DC recently made the point: demographics will always prevail. Japan may have had only half their current population pre war but they had a peasant society too. And that's what they are heading back to when the bell curve drops off its perch. China will be in exactly the same situation in a few decades - unless it secures itself an empire first. Japan tried that and as we all know, failed spectacularly.

Demographics will certainly prevail Ergo. In that respect Japan is in an enviable position.