Xi Jinping is defending globalisation and "inclusive, sustainable development". But can China really provide the leadership and solutions needed?

Business
Xi Jinping is defending globalisation and "inclusive, sustainable development". But can China really provide the leadership and solutions needed?
21st Mar 17, 9:04am by Guest 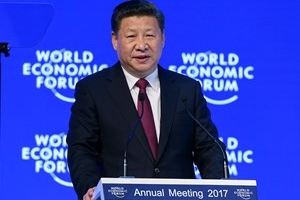 At the World Economic Forum’s Annual Meeting in Davos in January, Chinese President Xi Jinping, drawing on China’s own recent experience, spoke in defense of globalisation, and offered a vision of inclusive, sustainable development. With US President Donald Trump’s administration turning its back on internationalism, China has stepped forward to assume the mantle of global leadership. But can China really provide the alternative solutions needed to keep the engines of globalisation running?

The post-war liberal order has been in serious trouble since the 2008 financial crisis, which weakened Western economies and undermined global-governance bodies and regulatory institutions. According to International Monetary Fund Managing Director Christine Lagarde, emerging economies accounted for over 80% of global growth in the aftermath of the crisis, and now contribute 60% of global GDP.

Meanwhile, emerging powers, particularly China and Russia, have further undermined key liberal institutions and values. Russia’s 2014 annexation of Crimea and intervention in Syria have challenged principles of humanitarian interventionism such as the “responsibility to protect” (R2P); and a rising China is confronting the West’s supremacy – in hard- and soft-power terms – in the post-war global order.

The US has responded to these developments by trying to create a liberal order 2.0, and by pursuing a strategic pivot to salvage the status quo in Asia. Many observers have focused on America’s goal of preventing Chinese regional dominance. But the US also wants to defend and strengthen the principles that made post-war Asia’s success possible – what former US Assistant Secretary of State Kurt Campbell calls Asia’s “operating system.”

Thus, the Obama administration pursued democracy promotion in Myanmar; enforced rules protecting freedom of navigation at sea; and concluded the Trans-Pacific Partnership agreement between the US and 11 other Pacific Rim countries. Meanwhile, in December 2015, the US Congress ratified the IMF’s 2010 Quota and Governance Reforms; and in October 2016, the IMF Executive Board added the Chinese renminbi to the basket of currencies comprising the Fund’s unit of account, Special Drawing Rights.

If Hillary Clinton had won the 2016 US presidential election, we would now be seeing a continued US-led effort to reinvigorate and preserve the longstanding status quo in Asia and beyond. But with Trump in office, many fear that existing international arrangements could soon be upended.

America’s interest in maintaining the liberal world order stems from its role as what political scientists call a “responsible fiduciary” and “privilege taker” in that system. But Trump sees US hegemony as a burden, and seems oblivious to the privileges that it affords, not least the many benefits associated with controlling the world’s main reserve currency. But, at the same time, Trump does not want to cede America’s global preeminence, which means that he could show a penchant for trade wars, or even military conflicts.

In considering China’s role in such a world, it is worth noting a fundamental shift in Chinese thinking since the late 2000s, away from concern with international status and toward a narrower focus on national rejuvenation, or the “Chinese Dream.” For example, an analysis of Chinese media by Harvard University’s Alastair Iain Johnston concludes that, “Instead of a focus on anti-foreign ‘hostile forces,’ Xi’s primary ideological message is the ‘great revival of the Chinese nation.’”

Foreign-policy realists define great-power status in terms of a country’s self-perception or material capacities. For China, however, status is conceived in the context of its relationship with the established authority, namely the West. Starting in the 1990s, China began to see the US and the West as representing the global mainstream. While Chinese leaders might not aspire to join the West, they have certainly sought its recognition. They do not want China to be perceived as a hostile revisionist power, and cast into the “outgroup” of the existing order.

This is why China began to gravitate toward the West and seek further integration into the global economy. The government’s reformist ideology dictated that China “connect with the international track.” But, after the 2008 financial crisis, the Chinese suddenly discovered that the “international track” was in trouble. By necessity, but also by choice, China has since become a self-centered, “post-responsible” power. It is now less constrained by the status quo, and more intent on changing it.

Fortunately, China is not acting like a traditional revisionist power, and it remains deeply committed to economic globalisation. Chinese leaders see their country as the new engine of that process. Since 2013, Xi has been rolling out China’s massive “one belt, one road” program, designed to stimulate growth through global connectivity and infrastructure investment. China does not want a divided Asia or fragmented regional blocs built along geopolitical fissures, so it is cultivating international comity through shared interests.

But China will face a unique set of problems as it tries to carry the torch of economic globalisation forward. For starters, it is still a developing country, and its domestic landscape is fraught with political perils and economic uncertainties. Xi’s government is struggling to maintain domestic stability as it moves China away from labor-intensive, investment-heavy economic growth toward a model based on domestic consumption and services. The primacy of this domestic agenda means that China’s attempt to lead global change will lack a clear vision and coherent strategy.

A second problem stems from China’s incomplete transition on the world stage. After prevailing in World War II, the US immediately and undeniably dominated the globe. China, in seeking to lead the next stage of economic globalisation, enjoys no such geopolitical power and legitimacy.

Observers in the West and the developing world question whether the solutions China is offering are genuine public goods; many suspect that China’s “one belt, one road” initiative, for example, is a self-serving, unilaterally imposed scheme. That uncertainty underscores a central point: while the liberal world order could be in trouble, a Chinese-led alternative is not yet discernible.

Yong Deng is Professor in Political Science at the US Naval Academy at Annapolis, Maryland. His books on Chinese foreign relations include China’s Struggle for Status.  Copyright: Project Syndicate, 2017, published here with permission.

LOL of course he would defend Globalisation , the Chinese have cheated on a massive scale ever since they were accepted into the WTO , and in so doing , its enabled them to almost corner the entire world market .

China treads closer to a day of debt reckoning

It would quite the irony if the leader of the "free world" was an unelected communist whose political party members chose its own judiciary, who owned all its countries land and whose greatest historical legacy was to suppress the freedom of its own people to have a family.