Lee Jong-Wha thinks China has as much to lose as South Korea if they use trade as pressure to solve a secondary problem. The primary problem needs their attention

Business
Lee Jong-Wha thinks China has as much to lose as South Korea if they use trade as pressure to solve a secondary problem. The primary problem needs their attention
23rd Mar 17, 9:08am by Guest 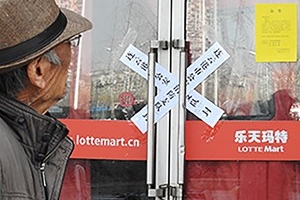 South Korea has decided to deploy a US missile-defense system, and China is furious. Chinese leaders worry that the Terminal High Altitude Area Defense (THAAD) system will undermine its security and disrupt the regional strategic balance, by monitoring flights and missile launches in Chinese territory. But, as long as North Korea poses such an acute threat on the Korean Peninsula, China’s opposition to it is pointless – and highly destructive.

As the United States and South Korea rush to deploy THAAD before the South’s snap presidential election on May 9, China is ramping up economic sanctions, in the hope of compelling the next president to reconsider. Already, South Korea’s tourism, consumer goods, and entertainment industries have been hit hard.

Chinese travel agencies have suspended the sale of group tours to South Korea. And China has temporarily closed the 55 discount stores owned by the Lotte Group – South Korea’s fifth-largest conglomerate and the supplier of the land for the THAAD system – for supposed safety violations. Chinese media have issued threats that sanctions could be extended to other South Korean companies, like Samsung and Hyundai.

China is eager to take advantage of its position as South Korea’s largest trading partner, accounting for nearly one-quarter of its external trade, and main source of foreign tourism. (Chinese tourists accounted for half the total number of foreign visitors to South Korea last year – more than eight million people.)

But it is hardly a one-sided relationship. South Korea is China’s fourth-largest trading partner, providing key intermediate inputs on which many Chinese firms rely. Indeed, intermediate and capital goods comprised more than 70% of South Korea’s exports to China last year, including key inputs such as semiconductors (20%) and display panels (11%). South Korea is also the number one source of foreign tourists to China.

Given these dynamics, if the dispute over the THAAD system escalates into a full-fledged trade war, both China and South Korea will suffer. As we have seen in the recent past, protracted tensions – for example, the territorial disputes between China and Japan over the Senkaku/Diaoyu Islands in 2012 – can severely damage economic and diplomatic relations. Already, South Korea is considering bringing the Chinese sanctions to the World Trade Organization (WTO) for adjudication, and the authorities are reviewing whether China has violated relevant clauses of the two countries’ bilateral free-trade agreement.

China and South Korea should protect the diplomatic relationship that they have maintained since 1992. But that requires China to recognize that South Korea’s next president is unlikely to cancel the THAAD deployment, given the threat North Korea poses. If China continues to apply pressure for a concession on THAAD, the only result will be an increase in anti-Chinese sentiment in South Korea.

The good news is that the Chinese authorities seem to recognize these risks, the clearest sign being their apparent containment of anti-South Korea protests. China’s leaders know that realizing their global leadership ambitions requires them to adhere to global norms and accept greater responsibility. In this context, South Korea’s move to involve the WTO – and the risk to China’s international reputation that a formal dispute would imply – may have focused Chinese leaders’ minds concerning the risks of escalation.

This is not to say that the THAAD system’s deployment is inevitable. If China devoted its energy to reining in its North Korean client, the threat confronting South Korea – and thus the South’s need for an advanced missile shield – might be mitigated.

And yet some in China equate South Korea’s THAAD deployment with North Korea’s weapons programs. A recent article in the Global Times, a nationalistic Chinese state paper, asserted that, if South Korea installs the THAAD system, it should face Chinese sanctions equivalent to those that are already choking North Korea.

This view fails to account for differences in intent. The North Korean regime, led by Kim Jong-un, is engaged in a remorseless quest to develop nuclear weapons and intercontinental missiles capable of delivering them. South Korea’s leaders have agreed to deploy the THAAD system as a defensive maneuver.

Instead of imposing sanctions on South Korea, China should increase economic pressure on North Korea, say, by cutting off oil supplies. But economic sanctions alone aren’t enough: the Kim regime has so far proved largely impervious to them. Given this, China would also need to engage with the US in sustained diplomatic efforts to reach a consensus on how to stabilize the Korean Peninsula and eliminate the risk of a military conflict.

Locked between China and Japan, the Korean Peninsula is, to use an old Korean saying, “a shrimp among whales,” and it has been subjected to untold horrors as a result. The Korean War turned it into a proxy battleground for major powers, causing it to lose two million inhabitants in just three years. For nearly 70 years since then, the peninsula has been divided, and now it may be the world’s most dangerous flashpoint. Another major military conflict – bringing millions more deaths and a surge in refugees – must be avoided.

Warren Buffet famously said, “Only when the tide goes out do you discover who’s been swimming naked.” If world powers continue to delay tackling the North Korea threat, they will soon be exposed. US President Donald Trump and Chinese President Xi Jinping, who will meet next month, must work together to reduce tension on the Korean Peninsula, before they are caught with their pants down.

Lee Jong-Wha is Professor of Economics and Director of the Asiatic Research Institute at Korea University. His most recent book, co-authored with Harvard’s Robert J. Barro, is Education Matters: Global Gains from the 19th to the 21st Century. Copyright: Project Syndicate, 2017, published here with permission.

Interesting stuff. I am currently doing a course on Korea in a global context from Hanyang University in Soeul and this ties in with some of our course material. Why won't China be much more forceful with NK? Yes, it has concerns over the chaos that would result from regime collapse,but it is far more worried about a much more powerful,American backed reunified Korea on its doorstep.
China seems to have a major dilemma on its hands.