Yu Yongding thinks that the trade war with the US will help the Chinese economy complete its necessary rebalancing, giving cover for Xi to make unpopular but necessary reforms

Yu Yongding thinks that the trade war with the US will help the Chinese economy complete its necessary rebalancing, giving cover for Xi to make unpopular but necessary reforms
3rd Nov 18, 10:16am
by Guest 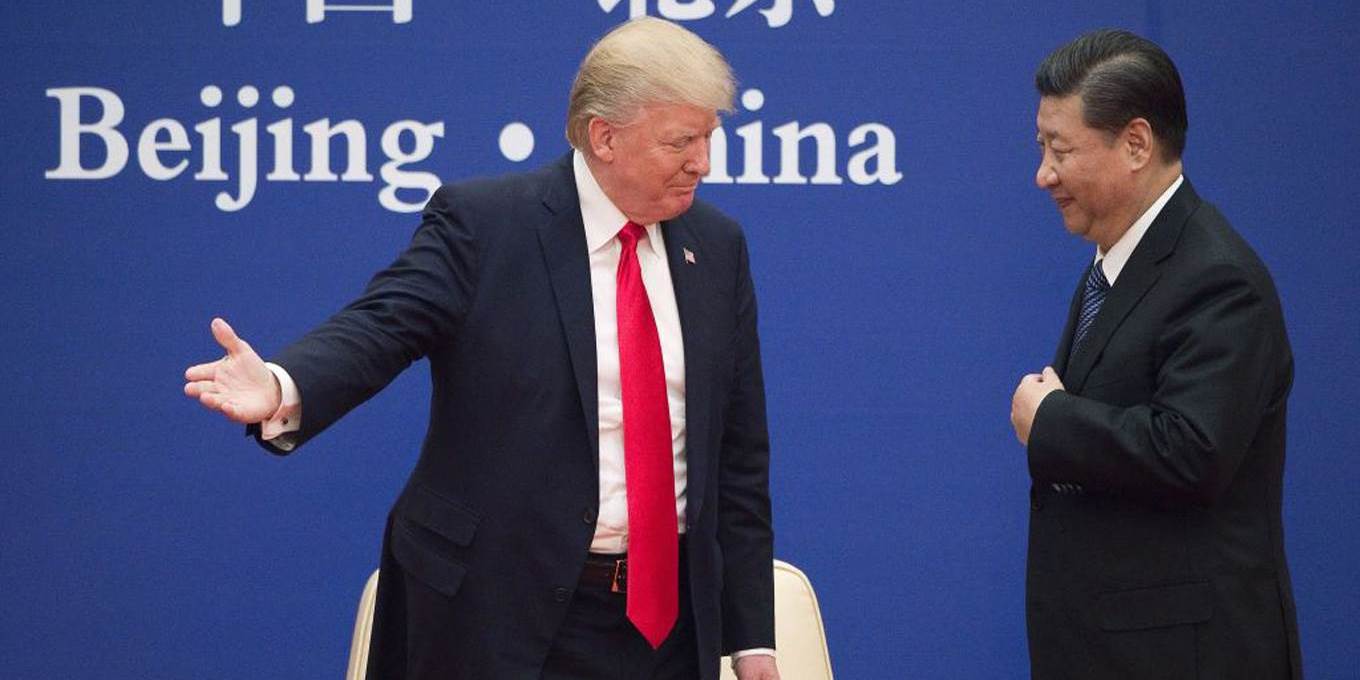 The Sino-American trade war, initiated early this year by US President Donald Trump’s administration, is escalating rapidly. Already, the Trump administration has imposed an additional 25% tariff on $50 billion worth of Chinese goods, and an additional 10% tariff on goods worth another $200 billion. Unless the leaders of the two countries can strike a deal at this month’s G20 meeting in Buenos Aires, the situation is likely to worsen. That’s better news for China than it is for the US.

So far, China has refused to bow to US pressure. While it has retaliated, it has kept its actions proportionate, to avoid excessive escalation. But there is no reason to think that the Trump administration – which has threatened tariffs on all Chinese products – will reverse course. After all, Trump believes that a country with a bilateral trade deficit is necessarily being taken advantage of by its partner.

The reality, of course, is that whatever costs the US incurs from trade with China are vastly outweighed by the benefits. For starters, thanks to low-cost imports from China, US consumers pay less for a wide range of goods, from shoes to electronics.

Moreover, the US runs a massive current-account deficit, meaning that it is borrowing much more from its foreign counterparts – especially China – than it is lending. Without inflows of Chinese capital, the US Treasury would face higher interest rates, raising the cost of financing government debt and the cost of homeowners’ mortgages.

True, the trade deficit with China has cost the US jobs. But those losses have been in low-wage positions, and have been offset by new employment in other areas. According to a 2006 report by the US-China Business Council, the 500,000 manufacturing jobs lost over the subsequent four years would be offset by the same number of new service-sector jobs. Whether these projections were met is another issue. The key question is – and will always be – whether the US is able to upgrade its economic structure and ensure a fairer domestic distribution of the benefits of international trade.

This cost-benefit calculation is probably why successive US administrations were happy to run trade deficits with China, even if they pretended otherwise. China’s government, too, was generally comfortable with the arrangement, though some Chinese economists have long warned that running a trade surplus with the US was not in China’s long-term interests, for a few key reasons.

For starters, running surpluses against the US implies accumulating foreign-exchange reserves. As the late MIT economist Rudi Dornbusch pointed out, it makes more sense for residents of poor countries to invest their resources at home in ways that raise productivity and living standards, rather than buying US Treasury bills. Yet when China began running a continuous trade surplus, its per capita income was just above $400.

Moreover, though China is among the world’s leading recipients of foreign direct investment (FDI), it has failed to translate all that capital into a current-account deficit that would finance increased domestic investment and/or consumption. Instead, by continuing to run a current-account surplus, China has established an irrational international investment position: despite having accumulated some $2 trillion in net foreign assets, it has been running an investment-income deficit for more than a decade.

Not only do US Treasuries produce meager returns; they are also less safe than they appear. After all, the US Federal Reserve could always decide that its debt burden has grown too heavy, and attempt to inflate it away by printing more dollars. Under more extreme circumstances, it could even sequester China’s dollar-denominated foreign assets.

In short, China has outgrown the world market, and its economy is desperately in need of rebalancing. Though the country has made significant progress on this front since 2008, its total trade-to-GDP ratio (37%) and export-to-GDP ratio (18%) remain significantly higher than those of the US, Japan, and other large economies.

It is worth mentioning, however, that a rapid deterioration of China’s current account will pose a serious challenge to the country. If China must reduce its trade surplus with the US, it must also reduce its trade deficits with the East Asian economies. The impact of such a rebalancing on the global economy could be very grave indeed.

China needs to stop accumulating foreign-exchange reserves. If it is to amass foreign assets, they should be more profitable than US Treasury bills. In any case, China should also reduce costly foreign liabilities. To that end, it must balance its imports and exports, while leveling the playing field for foreign corporations operating within its market by eliminating the incentives for local governments to compete for FDI regardless of cost, or to engage in other forms of undue intervention.

Last but not least, China certainly will make a bigger effort in indigenous innovation and creation to reduce its dependence on foreign technology, which has never been easy to obtain and will be increasingly difficult to secure.

These objectives are not new to the Chinese authorities. But, thanks to Trump’s trade war, policymakers are now pursuing them with a new sense of urgency. In that sense, the trade war may end up being a blessing in disguise for China.

In 2005, when the US government was pressing China to allow the renminbi to appreciate, Phillip Swagel, a former member of President George W. Bush’s Council of Economic Advisers, wrote: “If China’s currency is undervalued by 27%, as some have claimed, US consumers have been getting a 27% discount on everything made in China, while the Chinese have been paying 27% too much for Treasury bonds.” US policymakers, Swagel asserted, surely understood that, and they “certainly must realize that their very public campaign only makes it more difficult for the Chinese to take action.”

But, as Swagel acknowledged, maybe that was the point. The US push for China to let the renminbi appreciate was “a devious attempt” to sustain the “enormous benefits” the US derived, at China’s expense, from the fixed exchange rate. Even if this was an accident, the end result was “a brilliant strategy to keep the good times rolling.”

With Trump, those good times may be about to come to an end. Trump claims that the “trade war” with China “was lost many years ago by the foolish, or incompetent, people who represented the US.” But it is he who most likely will be remembered as the fool – a bungling, capricious leader whose attacks on China only made that economy stronger, at least partly at America’s expense.

Mr Trump doesn't care about poor Chinese workers, he only cares about poor American workers. And whilst he cannot replace job for job, he's got to keep moving the American economy forward into this new millennium. The older workers will be the hardest hit with the changes required, while the younger workers will not really know any different.
He should send China a bill for all the American IP they've 'acquired' over the past 40 years. $2 trillion should do it.

Actually I dont think he cares about either group, nor the American Middle class. All he is concerned about is getting their vote which the stupids seem to keep giving him. Coal miners? aside from maybe the odd vote what he is really after is the $s from the coal barons, miners jobs surviving are just an incidental. Meanwhile there are more jobs being created in the renewables energy sector that more than compensate for any lost coal jobs which at best have a limited survival time anyway.

"IP" is frankly over-rated and over-abused. Usually its down to rentier charging for nothing these days and best moved on from.

I keep reading this statement about China's elderly population as if it is some significant problem. It might be if they were mainly women as in the west - they live longer. It might be if they were receiving state pension - potential economic drain but in China you just keep working until you drop. And it might do if they had prolonged ill-health but cancer and heart problems tend to be related to a western diet not a mainly plant based Chinese diet. When the elderly die the resources of China are shared more generously over the survivors.

"Last but not least, China certainly will make a bigger effort in indigenous innovation and creation to reduce its dependence on foreign technology, which has never been easy to obtain and will be increasingly difficult to secure."

Sadly the Chinese Belt Road will aid......the wrong people....and we is a target.....from on High. Must be the new trickle down theory....from the new growth industry.

Meth from northern Shan State in both crystal and pill form has been found as far away as Japan, New Zealand and Australia. A record 1.04 billion Australian dollars ($800 million) worth of meth, believed to have originated in Shan State, was found by police in Western Australia in December.

The amount of Meth from China must require either a blind eye from the CCP or it is deliberate revenge for the Opium wars.

You would think that a Govt that controls every aspect of it's citizens lives could eliminate the production of methamphetamine and it's precursor, unless the CCP has a direct financial interest in the production lines.
Not to mention a political interest in destabilising other countries with a flood of cheap meth.
Leading to war, poverty and other conditions conducive to communism or right wing backlash.

Lets face it, China is the worlds $2 dollar shop. Human organs, counterfeit autoparts, methamphetamine, the contents of a competitors hard drive, your old high paying auto assemblers job ....you want it they got it.