Treasury surveys the risks to our economy of a hard Brexit and finds little likely impact, other than a rise in immigration and a stronger Kiwi dollar

Business
Treasury surveys the risks to our economy of a hard Brexit and finds little likely impact, other than a rise in immigration and a stronger Kiwi dollar 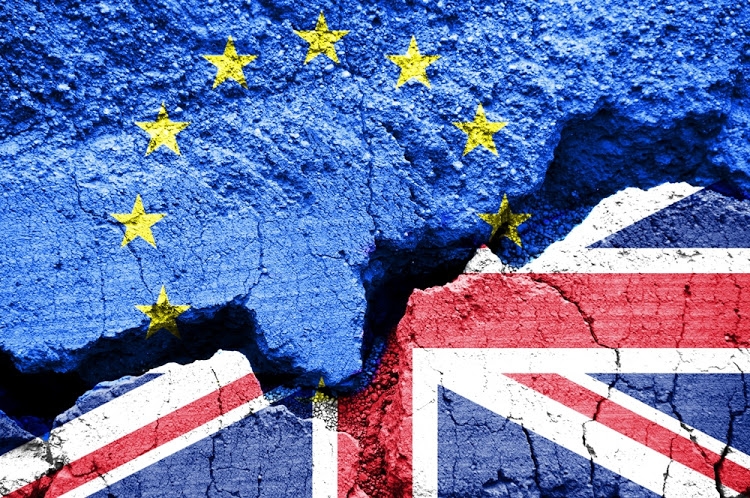 This is a Special Topic from Treasury's Monthly Economic Indicators report for February 2019.

The United Kingdom parliament continues to debate the terms of the UK’s departure from the European Union (EU) (the departure is called ‘Brexit’). One possibility is that the UK leaves without a withdrawal agreement and transition plan. This Special Topic discusses the economic impacts of a ‘no deal Brexit’ on the UK and the implications for New Zealand.

Most studies conclude that Brexit will reduce the UK’s economic output owing to frictions that reduce trade and investment. These effects may be larger or smaller depending on the terms under which the UK exits.

Brexit has already had negative consequences for the UK economy. Leaving the EU abruptly, without a withdrawal agreement and transition plan would amplify these effects. Growth in the EU would also be lower, particularly in the latter scenario. In contrast, scenarios where the UK maintains current arrangements over a transition period to a future state that has few new barriers to trade have relatively benign impacts on the UK and its trading partners.

The consensus view among economic forecasters is that the UK will avoid a no deal scenario, although the shape of the deal is uncertain and both no deal and no Brexit are still possible. The ‘no deal’ scenario, which could cause a serious economic shock in the UK, is the most likely to have significant implications for New Zealand.

Should it occur, our judgement is that a no deal Brexit would be likely to have a modest overall negative impact on economic activity in New Zealand. There are three main reasons for this assessment:

• Total trade with the UK is a small proportion of total trade and New Zealand’s direct investment in the UK is also relatively small (see Table 2).

• Some goods exports would likely be diverted to other markets eventually, although they may receive a lower price.

• New Zealand businesses and the government have taken steps to mitigate adverse impacts.

Nonetheless, some specific New Zealand businesses and industries may experience particular disruption. Inbound UK tourism may fall sharply as real UK incomes fall. Goods exports may be delayed at the UK border, and it may not be possible to find alternative markets in the short term, causing hardship for some exporters. Some importers may encounter supply disruptions from the UK and returns to some investors may be reduced by weaker UK conditions.

The medium-term impacts also depend on the nature of future trade arrangements New Zealand is able to agree with the UK and the EU.

Activity in the UK could fall markedly…

The Bank of England finds that a “no deal” Brexit could generate a contraction in GDP of comparable magnitude to the global financial crisis. That is, GDP could be 3% to 8% lower than baseline where the UK remains in the EU1. The unemployment rate could rise to around 6% from below 4% at present.

In the no deal scenarios, the combination of immediate logistical and regulatory impairment to imports of goods and services, and associated behavioural responses, reduce economic activity. The estimates are largest where lower trade, investment and migration have a permanent effect on UK growth. Conversely, when the UK is able to negotiate free trade access with the EU and with other countries, the impacts are smaller.

…with a lesser contraction in EU activity

The EU’s exports of goods and services to the UK, scaled relative to the GDP, are around a quarter of those running in the other direction. Given that the direct systemic consequences for the EU of “no deal” would be less than for the UK, an upper bound of the “no deal” hit to EU/euro area GDP might be 25% of that seen in the UK, that is, in the range of -0.5% to -2%. In the context of the recent loss of euro area growth momentum, the impact may be large enough to push the region as a whole back into recession.

New Zealand trade may be disrupted…

In the short-term, disruptions to trade with the UK can be anticipated owing to logistical issues. UK border inspection and approval services may struggle to cope with the increased volume of physical and regulatory checks and certifications required to move goods. Some transport routes may be disrupted. These issues may lead to exporters facing delays in receiving payment for goods.

A no deal Brexit could lead to tariffs on UK agricultural exports and imports which could lead to large shifts in trade flows. For example, tariffs on UK lamb exports to the EU may lead to more product on the domestic market, driving down prices. Similarly, EU exporters of dairy and beef to the UK may divert produce to their home markets, putting pressure on exports from third markets, including New Zealand.

…and the New Zealand dollar appreciate …

The UK exchange rate may depreciate sharply, increasing the cost of New Zealand goods to UK buyers, and increasing the cost of UK residents taking holidays in New Zealand. The Bank of England study assumed the UK exchange rate would fall 25%. Under this scenario, the NZD/GBP, which has averaged around NZD$0.52 over the past year, could rise to NZD$0.65.2

Slower growth in incomes across the EU more broadly may also depress demand for New Zealand goods and services. In the short to medium term, this is likely to feed into lower prices, but overall export volumes may be less affected if it proves possible to divert these to other markets. It is difficult to judge the magnitude of the impacts, but it is worth noting that movements in New Zealand’s export values of around NZ$600 million per quarter – around 40% of the annual value of goods exports to the UK – are not unusual.3

However, slower income growth in the UK and the EU may put downward pressure on goods prices and slow demand growth in services exports, particularly tourism. Figure 14 shows UK visitor arrivals have been variable in recent years, although it is unclear how big the Brexit impact might be.

Figure 14: Net migration to the UK and UK visitor arrivals 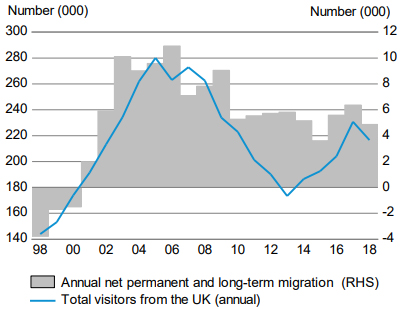 On the other hand, net migration from the UK and EU to New Zealand may increase, as worsening UK economic conditions lead to fewer New Zealand resident departures to the UK and more UK resident arrivals in New Zealand4. In the context of an economy operating at full capacity, this may be a positive development.

…and risks to investment in the UK rise

New Zealand’s preparations for Brexit and beyond

The New Zealand government has taken steps to ensure continuity in key regulatory arrangements underpinning trade with the UK. These include agreements to maintain all relevant aspects of the current EU-NZ Veterinary Agreement governing the export of animals and animal products and the EUNZ mutual recognition agreement (MRA) on conformity assessment. The MRA allows for continued recognition of each other’s testing and certification in respect of seven areas of manufactured goods.

The UK is also prioritising a new free trade agreement with New Zealand after it leaves the EU as well as potential accession to the trans-Pacific trading bloc, CPTPP, which counts New Zealand as one of its members.

Negotiations towards an EU-NZ free trade agreement will continue without the UK after it leaves the EU. New Zealand launched these negotiations in June 2018 and negotiators met for a third round recently in Brussels.

Free trade deals with the UK and the EU would be expected to have positive impacts on New Zealand’s economic activity through increased trade and investment.

1. EU withdrawal scenarios and monetary and financial stability: A response to the House of Commons Treasury Committee, Bank of England November 2018

3. That is, quarterly goods exports (seasonally adjusted) have a standard deviation of almost $600 million.

4. During the global financial crisis, a fall in departures to the UK drove an increase in net UK migration of around 2,000 people. NZ goods exports to the UK rose during the GFC as the NZD fell.

5. An appreciation in the NZD/GBP might raise returns for investment in NZ.

I have no sympathy for The EU for what they did to New Zealand's GDP and trade back when The UK joined.

Be great if Britain actually left the corrupt, crippled and decaying EU dinosaur and joined the CPTPP. Having Britain and Japan and Australia in our tent with the rest of South East Asia sounds just brilliant. It aligns our trade and strategic interests which is no small thing.

Island nations think differently from continental ones, as invasion comes from from sea, not the land. Thus they tend to be more agile and adaptive, and more trade oriented. Continental nations tend to favour the Grande Battalions, ie big is best, but they don't adapt so well.