New Zealand's gateway city is key to the country's food and beverage industries and advanced manufacturing sector, and home to many cutting-edge subsectors, all with ample opportunities

New Zealand's gateway city is key to the country's food and beverage industries and advanced manufacturing sector, and home to many cutting-edge subsectors, all with ample opportunities 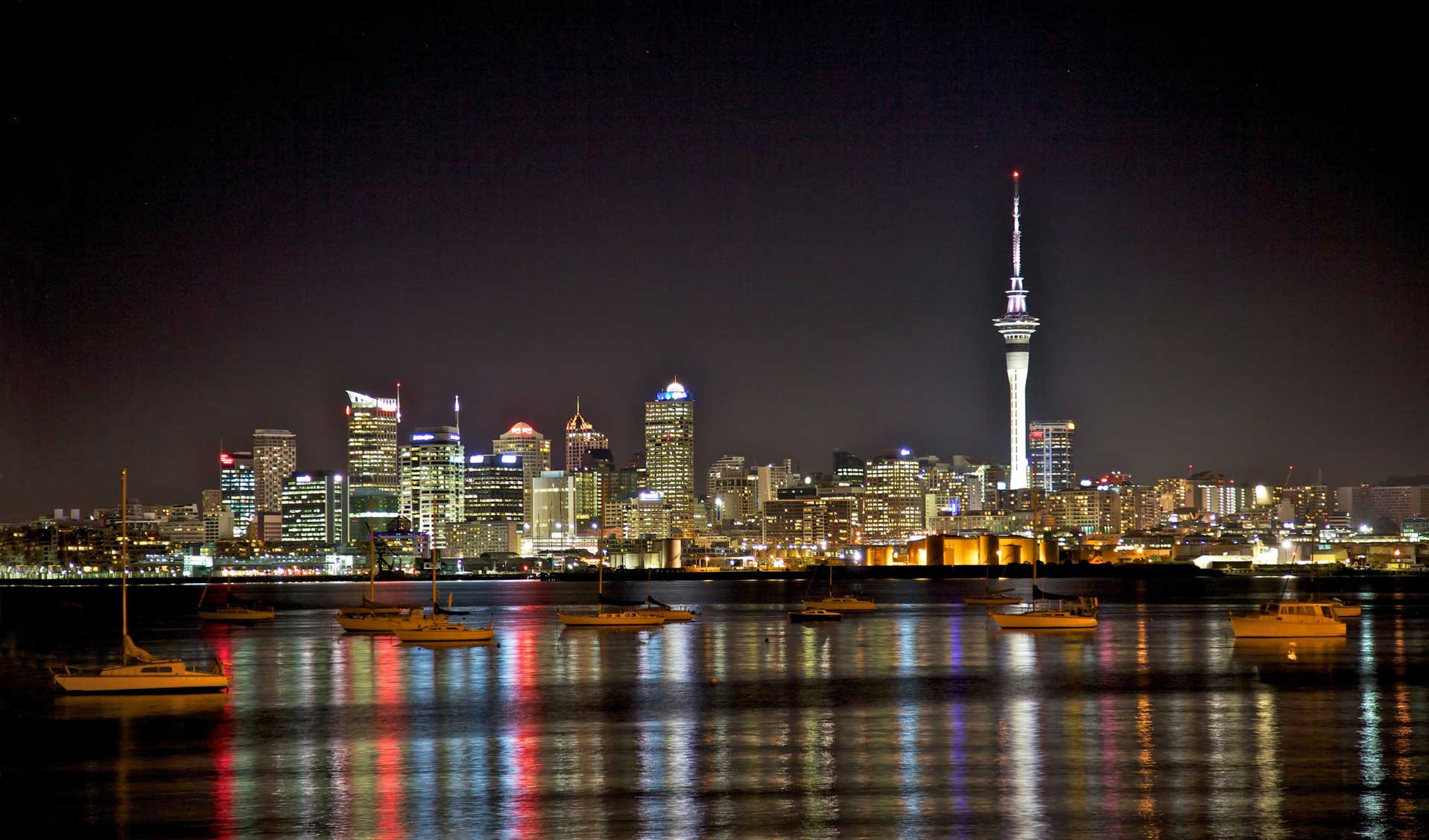 This is the third part of Deloitte Access Economic's "Regions of Growth" series. The earlier sections are here. This chapter is here with permission. 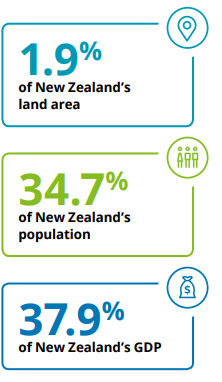 Auckland is growing rapidly thanks in part to record levels of overseas immigration.19 While barely taking up 2 percent of New Zealand’s land area, it is home to over one third of the population and recently reached 1.6 million people. Population growth is forecast to remain strong with the region predicted to reach 2 million people by 2028. It is responsible for almost 40 percent of New Zealand’s GDP and a quarter of our exports.20

With a growing population, and limited land for urban sprawl, dense urban areas will need to manage the upward pressure on living costs. These areas have a house price to income ratio of 8.8, and Auckland City is now the 9th least affordable in a survey of over 90 cities across the world.21 Future economic growth and prosperity will need to overcome the challenges an ever-increasing population brings. This is a significant challenge with no easy solution.

Auckland is the gateway to New Zealand, with 75 percent of all international visitors entering the country through Auckland International Airport.22 The city is a hub for large events like the America’s Cup, which is scheduled to be hosted there in 2021. Growth in tourism is supported by additional investment in the hotel sector, with 41 projects expected to deliver an additional 6,500 rooms over the next five years, an increase of approximately 90 percent.23

Auckland is also a key location for New Zealand’s food and beverage and advanced manufacturing sectors.24 Its proximity to the Waikato agricultural hub supports a thriving food processing sector. In addition, increasing international recognition for Auckland’s high-tech manufacturing industry has made it the country’s most acclaimed innovation hub.

Two thirds of New Zealand’s top 50 food and beverage companies are headquartered in Auckland. The industry in Auckland comes with a material R&D component, housing facilities such as the FoodBowl, a state of the art facility for R&D trials, as well as the Liggins Institute, which leads research into the development of food products with specific health benefits.25

Advanced manufacturing in Auckland is supported by GridAKL, the region’s innovation precinct and home to more than 100 businesses, from start-ups to multinationals. The region also contains a strong health technology subsector, as well as cutting edge engineering, 3D printing, robotics and space technology firms.26

Figure 5: The economic impact of reaching national export growth targets / forecasts to the Auckland region, relative to the ‘base case’ scenario, 2019 – 2040

Each of our industries of opportunity provide ample opportunity to contribute to future prosperity for Auckland.

In terms of employment, advanced manufacturing provides the greatest opportunity for Auckland. Our ‘counterfactual’ modelling for this industry of opportunity shows an increase of 27,300 FTEs, or 3.0 percent of the region’s current employment levels, by 2040.

Capitalising on this economic opportunity

The modelling undertaken for Auckland shows that growth in all of these industries would result in a significant economic impact. As Auckland is a key powerhouse of economic activity for the country this comes as no surprise, but the devil is in the detail and the results reveal some actionable insights.

First, the relative importance of exports to the Auckland region is less than in other regions. Exports of goods and services account for approximately 15 percent of Auckland’s regional GDP.27 This is despite Auckland being the entry point for most visitors, as well the exit point for many of our exports. This is not to say that export industries are not important for Auckland. Rather their importance is masked by the size of the domestic economy – driven off a large population base.

Auckland provides a great number of services that it can export to other regions, and supports a wide range of businesses. This diversity and scale means some of the industries of opportunity are less prominent in Auckland than they are in other regions. 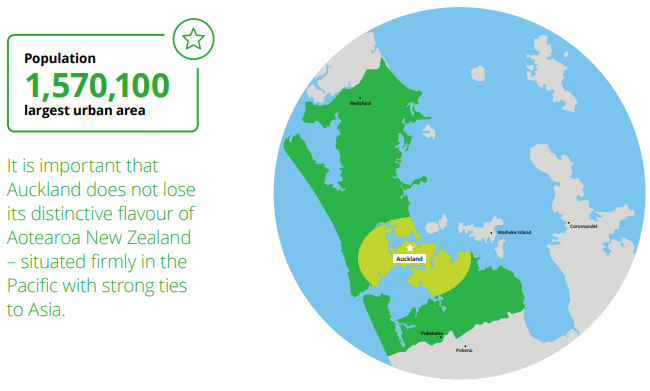 Focus on infrastructure must continue
This report is not intended to focus on how to support Auckland to function more effectively as New Zealand’s largest urban centre. However, it is worth re-emphasising that Auckland must follow through on infrastructure investment to ensure the region is not constrained by the quality of investment and lack of capacity for residents and businesses. This means freeing up land in the right places for the right things at the right time, providing bulk infrastructure to service this land, and fast-tracking a transport system that can effectively move people and goods between city and region, nationally and internationally. All are vital components to allow Auckland to function, let alone flourish.

Consider road pricing as an opportunity
Small changes can make a big impact: adding more park and rides, supporting active modes, streamlining intersections, prioritising safety and supporting urban regeneration through a community-first designed transport system are all things that will incrementally make a difference. But there is also room to take bold steps such as implementing a road pricing scheme and considering options to remove portrelated traffic from the network.

Extend the apex of the “golden triangle” north
This report has not modelled Northland. However, we do believe that by conceptually moving Auckland to the middle of the “golden triangle”, the potential for Auckland’s “halo effect” to extend north would allow Northland to provide support and capacity so that potential growth is not artificially constrained. While Northland is somewhat geographically challenged in a way that the Waikato is not, being narrow with an irregular landscape created by volcanic activity over a long period, that same activity provides soils that are already supporting a shift from dairy to horticultural products such as avocados, kiwifruit, blueberries and citrus – all of which are important to Auckland.

Spatial planning
It has often been said that Auckland should grow up rather than out. While this is conceptually appealing, it needs to be tempered by recognition that a highly constrained approach to Auckland’s spatial planning may lead to some unintended consequences e.g. increased house prices. For example, a recent study in the United States found that high house prices in highly productive cities, such as San Francisco and New York, limit the number of workers who can afford to move or stay in them, which has a negative effect on economic growth and productivity.28

Cluster benefits, and the use of technology
Auckland is the largest region for advanced manufacturing, with a wide range of technology companies as well as having the largest concentration of processed foods and non-alcoholic beverage manufacturers.29

The Auckland manufacturing sector could benefit from further automation. For example, the Netherlands exports hightech machinery such as robotic soft fruit pickers and automated meat separators and undertakes significant R&D in agribusiness, resulting in it’s badge as the food bowl of northern Europe.

Clusters have a positive impact on regional and industry performance although there are few economically significant manufacturing clusters in New Zealand.30

“Individual companies cannot establish them on their own, while historically governments across the world have tried and failed to conjure effective clusters from nothing. Therefore, where they exist, clusters are valuable because they represent defensible advantage in a competitive, globalising world.”

Given the benefit of clusters, and the fact that clusters are difficult to replicate, there is a significant opportunity for Auckland to respond to commercial opportunities for global demand in advanced manufacturing with a more formalised approach to clusters.31

Maintain its distinctive New Zealand brand
It is important that Auckland does not lose its distinctive flavour of Aotearoa New Zealand – situated firmly in the Pacific with strong ties to Asia. Diversity of thinking, experiences and culture should be celebrated, and are beneficial for Auckland’s tourism story, providing a differentiator from other global cities. Auckland will not win international convention business with a bland offering; cultural differences can be used as a draw-card to help attract international business visitors.

29. Ministry of Business, Innovation and Employment (2018). Beyond commodities: Manufacturing into the future, retrieved from https://www.mbie.govt.nz/assets/ f0f81b6194/new-zealand-manufacturingsector-report-2018.pdf

30. Clusters are “geographic concentrations of industries related by knowledge, skills, inputs, demand, and/or other linkages.”

This is the third section of Deloitte's report: "Shaping our slice of heaven: Regions of opportunity". The earlier sections are here and the full report is here. This article is reproduced with permission.

As a former Aucklander born & bred & having lived there for 55 years from 1960 to 2015 in my opinion it has exploded too fast with little immigration controls & a per capita of population rate of immigration exceeding that of the United Kingdom where the known problems helped result in the crazy Brexit vote
NZ did need to address its ageing population problem & lack of new births but years of poor immigration policy
have left Auckland my home town looking like Toronto or New York less the infrastructure & facilities
Only an accountancy firm could choose to neatly sidestep the reality the city has already transformed into something far from “Aotearoa”
It is not like Aucklanders or New Zealanders were ever asked to vote on massive social change to their society either.