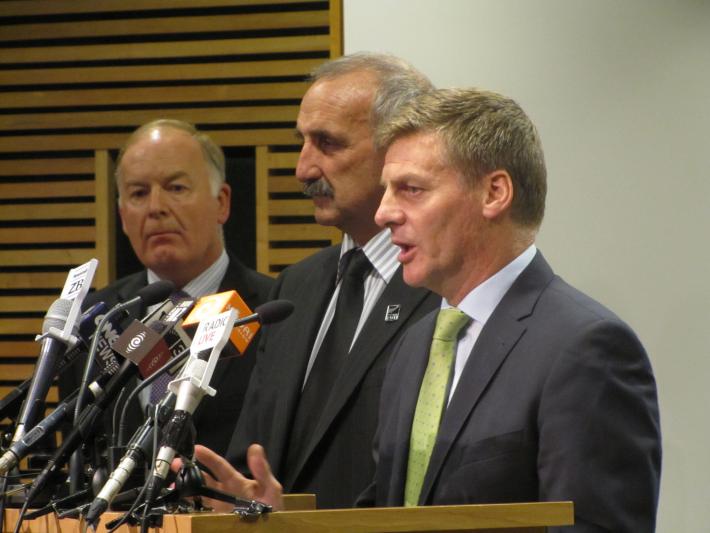 The Earthquake Commission and New Zealand government are covered for today’s 6.3 magnitude earthquake in Christchurch as a separate earthquake from the one that hit the city on September 4 because reinsurance had been put in place, Finance Minister Bill English said this afternoon

“My advice is that it is a new event. That means the Government reinsurance was back in place and any claims would be regarded as new claims,” English said at a press conference in the Beehive.

“To the extent that we’ve got to meet some costs, the Earthquake Commission has already been liquidating some of its assets. Clearly the impact of a large event like this is going to have a very big impact on the earthquake fund, but fortunately we have got some reinsurance back in place," he said.

"It’ll be a longer term issue, not a shorter term one."

The quake could also have an effect on the Government’s fiscal position, English said.

“But as [Civil Defence] Minister [John Carter] has said, the big focus right now is the safety of those people that are affected, and getting the system up and running to support them,” English said.

In terms of damage and human impact, the Government was gearing up for something “larger and more devastating” than the September quake, English said.

Meanwhile, Carter said the Government did not have an estimate of any fatalities following the quake. It was not “prudent or proper” to speculate on that figure at this stage, he said.

Search and rescue teams from Auckland and New Plymouth were on route to Christchurch, and government had received an offers from Australia to send teams over.

Carter urged people to leave the city centre, saying the army and police would evacuate and cordon off the area.

Carter also said it might be useful for people, over time, to think about taking a break from Christchurch if they could.

It would also be helpful if people thinking of going into the city stayed away, Carter said, citing problems with an influx of people to the city centre to help following the September quake.

I think we forget about the nature of this country and how it's been created. We have many faultlines and volcanoes but rarely in the last few generations have we had a reminder of such magnitude as these recent events. We sure do live on a time bomb.  Still,  I would not want to live anywhere else on an environmental level. As a society though we are failing and I hope the goodwill showed today will continue to come forth in the NZ psychi

Thank God they have reinsured because after the last earthquake the pot must be getting pretty empty and we don't have a lot of money because of the global recession.  But I guess it just goes to highlight the importance that as a nation we must always be prepared to cope with at least two major disasters at any one time.

This is not the first time this has happened (two quakes) although it is fast fading from our collective memory. The fact that it happened during the War probably doesn't help either.

In 1942 a powerful 7.2 magnitude earthquake struck the Wairarapa and did substantial damage to most of the towns there such as Masterton, Carterton, Eketahuna, Martinbourough but also damage to Wellington, Palmerston North etc. And then only 5 weeks later another large 6.8 earthquake struck the area again, causing even more damage to already weakened buildings in the southern north island much like what we have seen in Christchurch today. And this all came after the 1932 Napier earthquake!

I wonder if the Government has given any thoughts to following the Australian's lead and instituting a special one-off 'disaster tax' that they are talking about to help pay for all the floods they've had this year? Perhaps we should be doing the same to help pay for Canterbury, rather than have the Govt go out and borrow even more money?

Or maybe our values are wrong.

Rather than thinkig in terms of 'pay', which is a compromised construct from here on anyway,

How about just concentrating on creating resiliance and a pool of skills. Designing to withstand. Set up community networks.

The fiat money system is dead, as of peak resource-underwrite, why not look to what fits the next phase?

We've created a society, the large majority of which have no real skills.

David B
The most difficult part is the QLD and VIC state governments didn't have any insurance, and in spite of the previous events of last year decided to self-insure. The damage arising from the current floods and cyclones exceeded even the most pessimistic estimates, so they now find themselves in a hole. The worst part is proposed the one-off tax-levy is intended to cover only local-body and state-owned infrastructure and does not cover damage suffered by the citizenry, both physical and emotional. The hardest part to be felt by the population of CHC will probably be the need to re-assess their lives in the place they love and have called home for so long. How do you, or can you re-instate or begin to repair that?

The ECQ was established after the Wairarapa earthquakes. And thank god we have it. But I would still be happy to pay a one-off reconstruction tax to help rebuild the infrastructure.

As to the rebuilding,  I guess that's what the people of Napier did, and that city is now famous for its Art Deco buildings. So it can be done. It's a question that American's who live in those parts of the US that are affected by tornados, hurricanes or earthquakes must have to face as well. They rebuild too. Home is home I suppose, in spite of the curve balls the planet can throw at you.

Agree PDK  our society will not change untill the way banking changes.

Our society has been created this way, or it is a possible unintended conseqence.

Im qualified and skilled in two trades, and I have not passed any skills on to any one at all.

Have no intention of dong so either. Twenty years of self employment and competing to live life with CEO's etc on millions of dollars dosnt make it viable. I guess you have to connect the dots to figure out what I'm eluding to..

Once you show and teach some one what you know they can take you're job/work. This was an attitude and self defence mechanism handed down to me from circa 1988.

This quake is not good it wll be a tuff one to bounce back from under the current paradigm.

An earthquake zone..yes it sure is but rarely do the quakes kill and injure...it's shitty building code and slack local govt regulatory enforcement that brings the suffering. The rotting building saga was one side of it. Piles of brick rubble above walkways, roadways and pretending to be structural walls to public buildings...these are the other side of the story of neglect and stupidity.

In a matter of days we will see morons parading with placards demanding councils save heritage buildings blah blah blah.....buggger the rubbish....have it down now. That goes for Wellington as well. Those strolling the streets of the capital only need to gork up to see the hundreds of tons of masonry and brick rubble waiting for the 8.5 to hit.

Aren't I correct in saying, Wolly, that most of the deaths that have been reported in Christchurch so far have happened in and around its modern buildings? The heritage buildings of Christchurch were a major source of pleasure, identity, and source of tourist income for Christchurch. They should be rebuilt.

And let's not forget the Kobe earthquake in 1995 in modern day Japan with all its 'earthquake proof' modern buildings. 5100 dead.

Keep your heritage buildings and facades then DB. Trying to get through to you seems a waste of time. I say some of the 'modern' buildings were unsafe for unknown reasons. In each case there must now be a legal process to determine cause of death. It is no different to a road smash. Causing death by driving an unsafe vehicle is no different to causing death by allowing an unsafe building to be used. Especially post an earthquake as in the Sept event.

As for the facades of shite that have killed and injured people when they smashed to the ground, what do you want....to hang on to death traps?

The Sept event and this one must not be regarded as an end to the movement. The region is dangerous. Piles of brick and stone and 100 year old cement, do not amount to safety.

You ought to know that modern materials can be made to look like 100 year old brick and stone to the degree that experts can be fooled. The facades above walkways etc need to come down.

I suspect this will be dictated by central govt command. The same problem exists in wgtn.

A high number of the population lost their homes and businesses. The city centre will not be rebuilt- I think (Liquefaction/ epic- centre). Hopefully Christchurch City Centre will turn into the biggest and most wonderful “ Garden City of the World” (Parks, recreational) and on the outskirt in safe areas new developments take place - two storey apartment houses (terraced houses, urgently) and 2- 3 storey smaller business complexes will be build.  Work where you live – public transport in Chch isn’t the best. The world is changing and fast.