Christchurch architect takes Tower to court over offer to winch four-storey earthquake-damaged house uphill, rather than pay $2m to rebuild it

Insurance
Christchurch architect takes Tower to court over offer to winch four-storey earthquake-damaged house uphill, rather than pay $2m to rebuild it 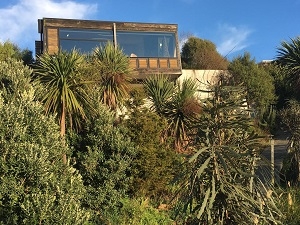 Tower has been taken to court over allegations it has breached its contract with a Christchurch couple by refusing to pay for their quake-damaged home to be rebuilt.

Instead, the insurer has offered to repair the four-storey Mount Pleasant property by winching it up the hill it slid a disputed 115 millimetres down following the February 2011 quake.

The couple are now seeking $2.098 million to rebuild the house Greg Young, who’s an architect, designed and had built in 2007.

The Youngs: It is impossible to winch the house uphill

The Youngs allege Tower hasn’t acted in good faith by being selective in choosing the experts it has called on for advice on what to do with the property, purposefully withholding information, and prolonging the settlement process.

They argue winching the house up the steep property it’s situated on, simply won’t work.

According to a copy of the opening submissions of the Youngs’ lawyers, Peter Whiteside QC and Harry Shaw, which were submitted to the High Court in Christchurch earlier this week:

“The radical solution of winching proposed by the Defendant has no credibility and is likely to cause far more damage to the existing house than any of the earthquakes.”

Whiteside and Shaw say the technique was pioneered by a Tower-appointed engineer and hasn’t been used for quake repairs in Christchurch’s hillside suburbs before.

The engineers the Youngs have been advised by, as well as the builder who built their house, say it’s a bad idea.

Whiteside and Shaw add the company Tower wants the construction work to be carried out by was founded by Wayne Tobeck, who has had 48 of the 73 companies he has registered with the New Zealand Companies Office, removed from its register.

Tower: It’s ‘fair and reasonable’ to repair rather than rebuild the house

Tower’s lawyers have refused to provide Interest.co.nz with a copy of their opening submissions. Yet a Tower spokesperson says:

“We have acted in good faith in all dealings with the Youngs and are disappointed to have not been able to settle this claim directly, rather than through the courts.

“Our advice, from a number of industry experts, shows that the repair of this property is the preferred outcome and our fair and reasonable settlement offer supports this.

“As the case is still before court, we are unable to comment any further.”

Affirming Tower's outlook as ‘negative’, A.M. Best in July red flagged the fact the company has run out of reinsurance to cover claims related to the February 2011 quakes, so is digging into its own coffers to cover outstanding claims.

It raised its concerns around the company’s “financial profile deteriorating", saying the quake hangover could have a “material impact on its prospective financial strength”.

This is how the five-and-a-half-year saga between Tower and the Youngs has played out, according to the submissions from the Youngs’ lawyers. Note Tower’s version of events may be different.

March: The Youngs take out an insurance policy with Tower, which says the insurer has the option of whether to pay for their house to be rebuild, replaced or repaired, if it accepts their claim.

February: The second major Canterbury quake is centred 3.8km from the home, and along with the aftershocks, causes “substantial damage”.

The force is so strong, it forces the house to move to the point a gap is formed between the driveway concrete block retaining wall and the house. A landslip also occurs under the house, with the earth moving downhill and dropping over half a metre lower.

The house moves down the site. Its floors, walls and foundations are out of place.

May: Tower approaches the Youngs about sorting out their claim and appoints the firm Stream Group as the project manager.

July: Stream gets a floor levelling contractor, Russell Grace to do a report.

August: Stream gets an engineering firm, EDC, to do a series of reports. The Youngs aren’t shown all of these.

December: Tower gives the Youngs a settlement proposal report, which doesn’t include a record of Sub Floor Construction’s views.

Beginning of year: Tower’s earthquake team leader, Philippa Andrews, takes over dealing with the Youngs’ claim. She tells them Stream and EDC haven’t come up with a satisfactory strategy to deal with their property.

Beginning of year: Andrews accepts the Youngs’ property needs to be rebuilt not repaired.

Greg Young gets a quote of $1.513 million from Miles Construction.

June: Tower changes its tune, as its earthquake recovery manager, David Ashe, says it has no inclination to rebuild the house.

Second half of the year: Tower makes a cash offer to settle the Youngs’ claim on the basis of total repair costs of $484,689. The Youngs reject this.

Tower gets a new engineer from the firm Eliot Sinclair on board and alleges the Youngs agreed to be bound by its report. The Youngs dispute this, so Tower is forced to abandon its position.

Eliot Sinclair is the firm behind the winching idea.

Beginning of year: An Eliot Sinclair engineer tells Greg Young the house appears to have moved over the top of the retaining wall downhill.

July: Eliot Sinclair releases its report on the property. Tower is adamant the home should be repaired.

Latter part of year: The Youngs engage their own experts in the matter.

August: A quote sourced by the Youngs from Miles Construction concludes the house can be fully replaced and garage repaired for $1.998 million.

Latter part of the year: 14 Tower-appointed experts visit the property.

Beginning of the year: 12 Tower-appointed experts visit the property. The Youngs aren’t shown reports from one of the builders.

July: Tower offers the Youngs a cash settlement of $1.3 million.

The Youngs: ‘Tower has unreasonably prolonged the insurance settlement process’

The submissions made by the Youngs’ lawyers go further to allege:

“Tower has acted unreasonably in rejecting the expert advice it received from Sub Floor Construction Limited as early as June 2011, which recommended a rebuild as well as deliberately withholding that advice from the Plaintiffs until 7 January 2015.

“Tower has deliberately engaged and promoted expert advisers including Stream Group New Zealand and Mr Sinclair [from Eliot Sinclair] to reject the view that a rebuild of the house is necessary or to specifically prove the house has not moved;

They want Tower to pay the Youngs $2.098 million for the rebuild, which takes account of inflation in building costs in the last year.

They’re also demanding damages of $100,000 and for Tower to cover the architects’, engineers’ and surveyors’ fees, plus temporary accommodation costs.

The case is expected to have a 10 day hearing. It’s one of a string of quake-related disputes that have escalated to the point they’ve required court action.

A classic example of how insurers are now handling some of the trickier & more expensive earthquake claims.
Its almost as if they are selecting a range of experts, and then cherry-picking out of their reports the ones who will give them a cheaper outcome.
It would be interesting to see those so-called experts then be forced to sign a contract to manage the repair strategy they have proposed, so as to meet the "as new" terms of the insurance policy.
The disclaimers would reach from Christchurch to the moon.

This all smacks of the standard McKinsey tactic of "delay, deny, & defend", designed to wear down the homeowner.
Is the only honest insurer a dead insurer?

My parents have been through a similar experience with IAG. I think IAG commissioned a total of five engineering reports (over the last five years) and their claim was passed through untold case managers as staff moved on. IAG even managed to lose one of the engineering reports. What's been most concerning is the sheer incompetence displayed by some of the engineers, e.g. a senior partner turning up with nothing but a spirit level, getting critical information about the construction of the house wrong and leaving critical information out of reports. You can guarantee these guys are charging the insurance company a high hourly rate for their crappy work. What was initially assessed as a $285k repair is finally, after all this time, close to being cash settled for nearly $900k (IAG don't do repairs anymore). Unlike Tower, IAG actually seem motivated to get this claim off their books. Once they've settled with IAG, my parents will probably sell the property as-is where-is and wash their hands of it. Who needs the additional stress of a nine-month repair?

Good luck Greg, I hope you win the case

Tower has [allegedly] breached the duty of good faith especially in giving a settlement offer without the full information being enclosed.

I has an income replacement policy with this insurer. It took a full 12 months to get my full entitlement. Luckily, I had another source of income, but it was a battle all the way.

Insuring with Tower is as useful to a ship relying on a lighthouse with no light.