Buying insurance via Facebook Messenger a step closer to becoming a reality as Lloyd's of London agrees to underwrite Auckland insurance start-up, Cove

By the end of the year, you should be able to buy car insurance using Facebook Messenger and make a claim by submitting a video recording of yourself explaining your loss.

These are some of the ways an Auckland-based start-up plans to make buying insurance and making a claim intuitive for those more at ease sending a message on their mobile phones than filling in a form.

The insurance provider has just become an approved coverholder for Lloyd’s of London. This means its products will be underwritten by certain underwriters at Lloyd’s.

Cove will in coming months start offering comprehensive car and mobile phone cover, before enabling people to insure other individual items, all their contents and by the start of next year, their homes.

Ultimately, Wilson and the Coon brothers would also like to sell life insurance.

They see the user experience differentiating Cove from other insurers in the market.

For example, rather than filling out an online form to buy car insurance, a chatbot will ask you to provide the information Cove needs about you to price your risk.

Andy Coon maintains this is easier than tapping into the various fields of a form on a mobile phone. 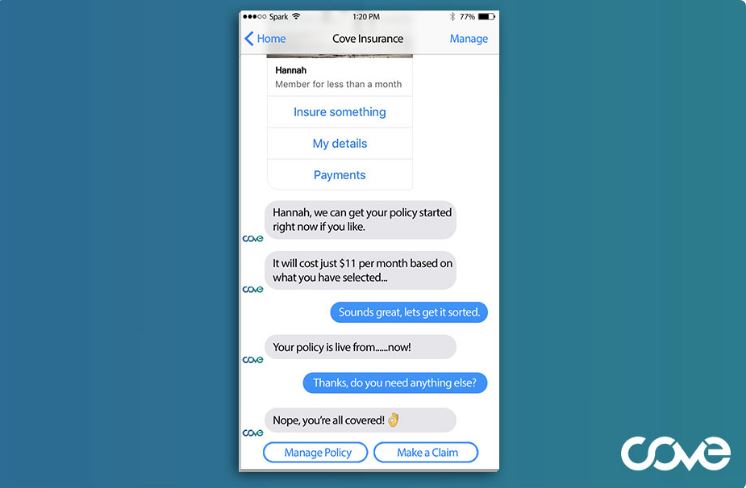 Cove will also try to draw data from as many external sources as possible, to reduce the amount of typing you have to do.

Like other insurers, it will tap into databases to get information about your car by you providing your number plate; or your house, by you stating your address.

However it will also be able to pick up your location, and get your name, email address and mobile phone number from your Facebook account - in the same way a number of other apps do this with your permission.

Wilson assures Cove won’t be able to see your personal Facebook information. Nor will it use whatever information you have on Facebook to weigh up your risk profile - IE charge you a higher premium if there is a photo of you on Facebook doing donuts in a carpark.

Nonetheless, Wilson says customers will need to be comfortable with the media they’re dealing with.

“It’s similar to any online purchase that you make. The level of analytics that Google and others have is quite complete,” Andy Coon adds.

While the interface is completely novel, he says the way Cove prices risk is fairly similar to other insurers.

When it comes to making a claim, Cove customers will once again use the chatbot.

By the end of the year they will also be able to upload a video of them explaining their loss.

Cove’s technology will analyse this and in most cases settle the claim immediately.

If the video analysis comes back with certain tell-tail signs the claim may be fraudulent, Cove will analyse the claim manually.

While Cove intends to automate a number of the processes involved in insurance, customers will still be able to request to talk to a real person through its messaging service, or call a 0800 number.

While Cove has written its own policy documents and come up with its own processes, being underwritten by Lloyd’s means it doesn’t need a Reserve Bank of New Zealand insurance licence.

And because its chatbot doesn’t provide advice, it doesn’t come under the Financial Markets Authority’s remit.

However it has registered as a financial service provider.

Asked whether its model has meant Cove has been able to side-step some major regulatory hurdles, Andy Coon says, “That’s true and not true.

“Lloyd’s does behave as its own regulator, so achieving coverholder status is no light feat. We have been through a process - that while not the same as becoming directly regulated - has a very heavy focus on all the consumer protection.”

Wilson also attests to the detailed due diligence Lloyd’s did before deciding to back Cove.

Cove is expected to be available to the general public later this year.

I see so many issues with this I don't even know where to start.

Definitely not for me.

Probably because you are the wrong generation.

Is cove short for covert? Leaving aside the rather dubious nature of the guarantee of confidentiality protection this has the potential to be absolutely super, that is all the way up the process until you get to lodge a claim.

Sorry but I tend to not want to share my insurance details with the most flaky messaging app, along with anyone willing to pay for it en masse as a large data analytics bunch.

I will give them this though, they wanted to draw more customers in and advertising & communications via social media is certainly going to do that. They can tailor their ads to profile for specific customers... come to think of it they would also be able to track the users personal habits & responses,... why not get customers to give that to you for free so you can mine the data later on. Sure they initially state they do not yet have the data mining BI to assess risk with it, but a quiet update or third party can solve that and assessing risk is not the only thing they can do with the data. Besides it is not like FB comms. privacy is fine tuned to trust it to filter to specific groups yet with all the bugs.

However they assume the user has sufficient mobile connection & data cap to communicate during a period where they would make a claim. If anything companies like Vector are learning, abet slowly, that is often not the case. FB produces such data hungry apps it needs to be restricted in almost every way possible just to not chew up an entire data allowance.

I think you are deluded if you dont fathom just how pervasive data sharing is and will become.

Be interesting to see if these three coves manage to keep it all squeaky clean. Never put a foot wrong with Lloyds, the London Eight'll be on to you as quick as you like.

Interesting concept but I believe, People believe in not what you say but what they understand. This process will only add another layer of confusions to a very confusing industry. I have insurefinda a global application which is not a insurance company and they simplify the whole process for us customers.

This isnt targetted at the old foggies, but the data savvy, always connected youth.