Is parametric insurance a potential growth market in the face of climate change?

Is parametric insurance a potential growth market in the face of climate change? 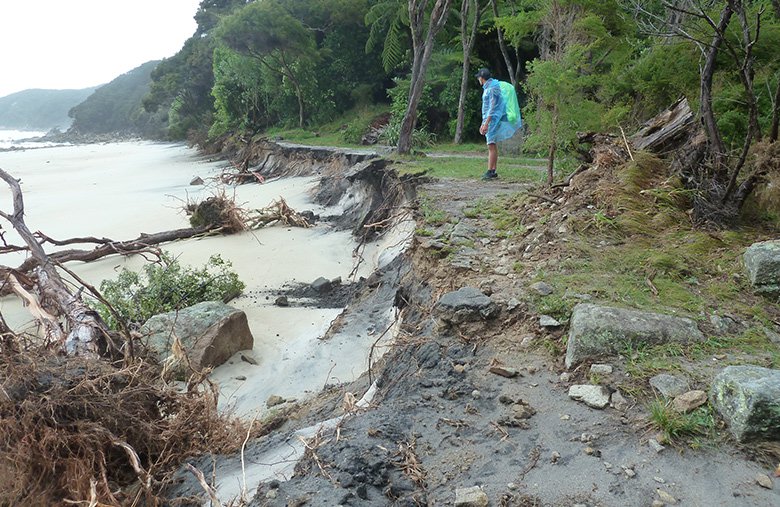 A member of the public looks at the coastal damage caused in Abel Tasman National Park by Cyclone Fehi which struck New Zealand in February last year causing millions of dollars worth of damage.

With the growing use of data analytics in the digital age, the use of insurance products such as parametric insurance, is starting to grow around the world.

And with the effects of climate change now a reality such policy options are becoming more attractive to people internationally in a wide range of sectors, from construction and agriculture to tourism. But what about closer to home? Is parametric coverage already making in-roads in the local market, or is it still in its infancy in New Zealand?

With parametric insurance a claim is guaranteed upon the occurrence of a particular event and this is defined by an agreed index, parameter, or metric.

If a fruit grower has a policy covering crop damage through frost, it could be agreed if the temperature drops below a certain level, they automatically receive an automatic predetermined pay out of a certain amount. It covers the policy holder for the probability of a predefined event happening, instead of indemnifying them for the actual loss incurred as you would see with normal insurance.

It can be used to cover gaps or exclusions in a client’s existing policy who may want to enhance their cover with some additional parametric coverage.

With traditional insurance, the policy holder pays a premium and they are covered if an incident or event happens. But payment is generally only made after an investigation or assessment has been carried out. This is underpinned by the idea that the cover will return the person to the place they were before the loss.

Whereas with parametric insurance there is no assessment and the agreed pay-out occurs once the agreed metric is reached, which could be based on everything from wind speed or temperature to rainfall.

“If you have frequent extreme weather events it leads to greater volatility in terms of your revenue. With a parametric you would know that if you’ve been suffering from say a drought you would know when the trigger would be met and exactly how much you will be paid out.

“If that event occurs that triggers the insurance pay out. Which is different from indemnifying for loss. There is a pay out without having to establish the loss. You know exactly how much you will receive and when. This means that parametric may at times pay more than the actual loss or less than the actual loss.  It is important to structure parametric cover to ensure the pay-out is as close to the expected actual loss as possible.

"A disadvantage of traditional cover is that it takes time to assess losses after an event whereas parametric cover when triggered leads to a rapid payment without the need to assess loss."

Grafton says there are already parametric insurance products available on the global market. And closer to home he says New Zealand’s farming sector is one area where such products could be used in the future.

“I think traditionally in the agricultural sector there hasn’t been a strong demand for those sorts of products and that’s primarily because of a couple of reasons. One is that our farmers have tended to consider that with farming you take the ups and downs of the climate and that's part and parcel of farming.”

And he says in New Zealand, dairy co-operatives often provide a buffer for the dairy farming industry against unforeseen climatic events. But he says such co-operatives may see the benefits on taking out a parametric insurance themselves to provide cover for such events.

Grafton says such policies have been available for several years internationally and tend to be sold through brokers and through offshore arrangements. He says ICNZ doesn't have data on parametric insurance, but says it would be very small part of the industry market in New Zealand.

But it isn’t all plain sailing. According to Swiss Re Corporate Solutions’ Andre Martin, one problem with such coverage is basis risk, this is when the event doesn’t correlate with the index or parameter that triggers a pay out and leads to the client facing a loss. But while that is always a risk the potential loss can be reduced by using different options such staggered pay outs where a client gets paid an increasing amount as, for example, the category of a storm rises.

Grafton says some parametric insurance products are funded using catastrophe bonds, or cat bonds, but he says they don’t have to be. They are used by insurance companies as a form of reinsurance to off set their risk and Grafton says such bonds are often bought by hedge funds and retirement funds and represent a sub-set of the wider parametric market.

“They are attractive to funds looking for a non-correlated return,” Grafton says. “So it’s basically linked to a natural catastrophe occurring, or not occurring. If it does those investors who’ve purchased the bonds lose their money, or if it doesn’t, they make a return.”

Cat bonds are risk-linked securities that transfer a specified set of risks from a sponsor to investors. And the New Zealand Super Fund currently has invested in them itself. The fund’s website states:

“We have made an initial commitment to the strategy of US$125 million with potential to expand to US$250 million. This will mostly be invested in securities that cover US hurricanes and earthquakes, with some products covering European wind storms and Japanese earthquakes.

“Catastrophe bonds (and other insurance-linked securities) are a way for capital markets to provide reinsurance to the insurance industry. Essentially, they cover catastrophic events such as major hurricanes, earthquakes and bushfires in areas where such events present a low but genuine risk.

“They exist as a way to spread the risk and the cost of major catastrophic events that are unlikely to occur but which are very expensive when they do. For an investor, the rationale is the income stream derived from the premiums paid on the policies in the pool. The insurance industry values this back-up insurance, and pays attractive premiums to investors to provide it.”

The New Zealand Super Fund says its investments are being managed by Chicago-based Elementum Advisors, LLC.

“We continue to monitor developing overseas trends and review these regularly, including parametric insurance, to check their viability for the New Zealand market.”

One Auckland based insurance broker said he didn’t know enough about parametric insurance to talk about it, but said it was a subject discussed at a recent industry conference. While another broker said he’d been in business for 25 years and had never heard of it.

So while it’s not something major insurance companies and brokers are currently offering in New Zealand it is a growing market internationally. And as we face more extreme weather events and the effects of climate change become more and more apparent maybe such forms of coverage may become attractive to more New Zealanders.

Insurance, globally, is in trouble. It is in trouble for the same reason global finance is; that we are going beyond growth.

This had to happen on a finite planet, bewildering though it seems to be for some.

So increasingly, debt can't be inflated away, can'r be repaid, and going into debt to pay for insurance doesn't work in a de-growth environment. The AIG bailout (with an IOU from in-debt taxpayers, at the time) is merely a curtain-raiser. Watch for withdrawal from risk, everything from sea-proximity to income-guarantee.

Ultimately, we are heading for the Limits to Growth peak/plateau/drop in the near term. As we go over the top, we become uninsurable. That just how it will be. But the withdrawal of the industry may well be the most honest marker we get, of where we are on the trajectory.