Retirement Commissioner says default KiwiSaver rate should be 4%; Has no money to roll out financial literacy materials to schools

KiwiSaver
Retirement Commissioner says default KiwiSaver rate should be 4%; Has no money to roll out financial literacy materials to schools 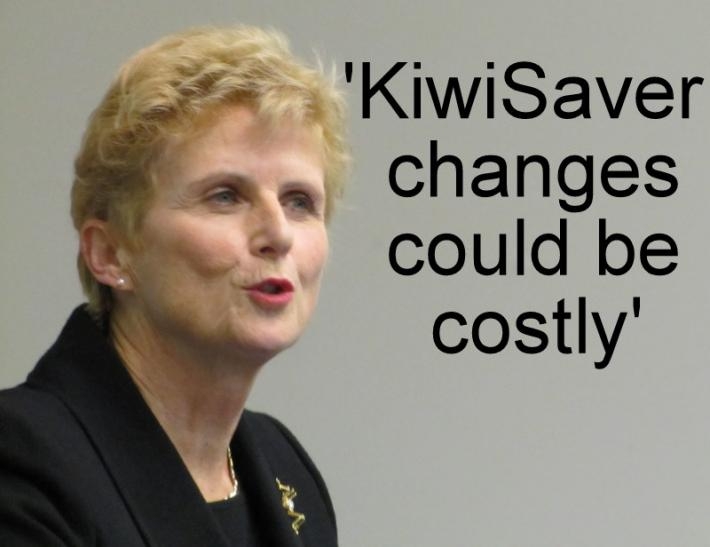 A default Kiwisaver rate at 4% of income, with the ability to opt down to 2% would be a good change to the savings regime, Retirement Commissioner Diana Crossan told Parliament’s Finance and Expenditure Committee this week.

However, Crossan said she did not agree with many of the Savings Working Group’s recommendations for changes to Kiwisaver because of various costs involved.

“If we look at the three parts of the review, they [the Savings Working Group] made some very good structural comment about the tax system, which is their baby and not mine," Crossan told the select committee.

“In the area of Kiwisaver they made some interesting comment. We’re not here to debate the Savings Working Group, but I would debate some of the issues,” she said.

“My real concern about some of the recommendations on Kiwisaver is, is there enough upside to make the change? Making change is hugely disruptive on several fronts – it costs the nation a lot of money. It costs the provider."

“All their information that goes out has to change. They ditch a whole lot of stuff and they have to start again – all their prospectuses, all of that,” Crossan said.

“The second thing is it costs in people understanding what KiwiSaver is. The third one is just trusting a system because it changes so often,” she said.

“So I’m really concerned about some of those changes. I didn’t see enough pluses in some of the [KiwiSaver] changes.

Crossan said she was also disappointed in the financial literacy component of the report.

“I think one of the things that happened is that they were very focussed on the taxation and KiwiSaver [issues], and not so focussed on financial literacy, and I thought it was rather weak in its recommendations.

Despite her reservations, Crossan did say having a default rate of 4%, rather than 2%, was a good idea.

“I actually quite liked that recommendation because 2% probably isn’t enough, and we all know that,” Crossan said.

“But we also know there are some people at this time in their lives [who] can’t afford it. I think in a way the automatic enrolment into 4%, as long as there’s enough communication, I think that’s quite a good one,” she said.

“There will be a lot of people who just stay at 4%, but some people who choose [to go down to 2%] because they can’t afford it, then I think that’s a good option."

Meanwhile, Crossan raised concerns about New Zealand not having an annuity market for when people receive lump-sum payments from their Kiwisaver accounts when they retire from 65.

“The things that we need to be really clear about is that there’s highly unlikely to be a natural annuity market in New Zealand. The market’s too small,” Crossan said.

“We look at Australia - they don’t even have a well functioning annuities market.

“One of the things is to have a closer look at how much the government wants to be involved, and how much it can involve the private sector in some kind of annuity,” she said.

“I think we’re going to need it, I think KiwiSaver will push us there. There are tax disincentives at the moment. I think that’s a bit of a red herring."

“There are lots of options: NZ$10 onto your New Zealand Super for the rest of your life,” Crossan said.

“The other side of it is why the banks and other KiwiSaver providers don’t lift their game around offering DIY annuity - how do you use rolling term deposits, and some of the products they’ve got now could be used if people had information better,” she said.

No money to roll out financial literacy cirriculum

In other comments Crossan expressed her disappointment at the Retirement Commission and Ministry of Education not being able to roll out a financial literacy curriculum to schools due to budget constraints caused by the global financial crisis.

“But if the government was to make it a priority then things like ERO reports would be picked up, schools would be asked what are they doing in financial education, and that would be a really useful thing,” she said.

“There are resources – teacher resources as well as kids’ resources – ready to roll out to schools, but we got caught up in the global downturn and unfortunately when we thought there was going to be money for roll out, there is no money for roll out of financial education in schools. So if anybody’s got any in their back pocket, that’s what we’re looking for to help roll-out to schools."

“We are of course using every which way we can, as some of you will know. We’re talking to principals and unions, and they’re all supportive. But we just didn’t get that. We landed at completely the wrong time in the downturn,” Crossan said.

She did not have a costing for the roll out, but it would take some time to roll the curriculum out.

“It would need to roll out into the colleges of education before pre-sercive training. That was just being developed at the time when we got caught up in the costs.

It would also need to have a roll out of some materials, although a lot could be taught on line.

“We could get the Ministry of Education to do a costing – it’s their responsibility. I’m just the one who watches to see it’s not happening,” Crossan said.

Which came first, the chicken or the egg?

quote from above, "In other comments Crossan expressed her disappointment at the Retirement Commission and Ministry of Education not being able to roll out a financial literacy curriculum to schools due to budget constraints caused by the global financial crisis"

“We could get the Ministry of Education to do a costing – it’s their responsibility. I’m just the one who watches to see it’s not happening,” Crossan said.

Double speak, flag the costing cost and use that!. The costing probably cost's the cost.

andin other words Crossan dosn't do anything except watches to see what happens and pass round the responsibility. Next deck chair anyone?

What Crossan's saying is she has got the materials ready, but becasue the Min of Ed had to cut funding, it hasn't rolled out the materials (which is its job).

She was there telling govt to make it a priority to get the Min of Ed to roll out the cirriculum.

Exactly my point, in that, you have summed up all that surperfluous BS in three lines.

Utter Nonsense. It's got nothing to do with illiteracy.
How misleading. These authoritative pronouncements, used in isolation, by people who do know better, on this subject is irritating. That many of these pronouncements go unchallenged and unexamined is cause for further irritation. This topic relates directly to Amanda Morrall's articles on Kiwisaver, and should be in conjunction with one-another.

The irritations. AU has had compulsory superannuation fo 21 years now. Forty percent (40%) of all super fund members have opted to operate their own Self-Managed-Super-Funds because of dissatisfaction with Fund Managers. Of the remaining 60%, 80% is controlled by the 4 major banks. The total value of the industry is now $1.3 trillion. Knowing that after 21 years the Fund Managers were growing lazy and fat on guaranteed fees, the government commissioned the "cooper review" to look into the industry as whole. What it found was 80% of those funds being managed by Fund Managers (the banks) were in default funds. The review found that the Fund Managers had a propensity to obfuscate in their reporting to the point is was impossible for members to understand the reports or even compare one fund to another, resulting in which members became dis-engaged. Which led to the analysis/conclusion most members were illiterate. The "cooper review" found that members dis-engagement (ie illiteracy) was in fact driven by the intentional complexity by the banks (Fund Managers).

This report came out mid 2010. It is available on the internet. The Australian $1.3 trillion industry is not in its infancy as Kiwisaver is, but (a) the problems are the same, and (b) the banks are the same, and (c) the Fund Managers, in time will eventually be the same. Have a look http://www.google.com.au/search?hl=en&source=hp&q=cooper+review+recommendations&aq=5&aqi=g10&aql=&oq=cooper+review

You will save yourselves a lot of agony, mistakes, and self-flagellation.

I'd love to manage my own kiwisaver, but I imagine there would be a high setup cost involved in this.

Is it possible to do it without incurring a high cost?

It's a lesser of two evils issue really:

It seems to me that the latter is very much the greater of the two evils.  Particularly since KiwiSaver isn't compulsory, so you're not forced to throw your retirement prospects to the mercy of fund managers as they are in Australia.

As an employee, I prefer KiwiSaver MK1, where both the employee and the employer contributed 4%.  Then KiwiSaver may have had the chance of being anything more than just an additional supplementary substandard retirement tool it's been reduced to.

Making a default 4% contribution just for the employee is borderline predatory behavior in regards to the fund managers, because as soon as Joe Public realize they can reduce the amount to 2%, and the considerable cons to contributing anymore that the absolute minimum, they'll do so quick smart. If this is the best they can come up with, we're buggered!