Personal finance editor Amanda Morrall finds a silver lining hiding in the attic, but should she sell it? Your view on silver?

Personal finance editor Amanda Morrall finds a silver lining hiding in the attic, but should she sell it? Your view on silver? 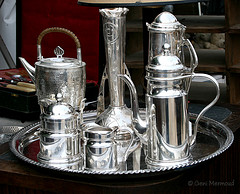 For better or worse, my financial misery and yesterday's heartwarming show of support from loyal readers, has inspired me to new heights - or possible new lows.

There's not a riduclous amount of it and it's hardly a long-term fix for my cash-crunch, but given that it sits neglected and gathering dust (along with a treasure trove of other bits and bobs from a past life) it seems a highly practical, if necessary measure.

Sentimental value aside, late grannie's silver tea service will polish up nicely on the open market.

Strip-mall cash convertors on the receiving end of the clean-outs are doing a brisk business as are bullion dealers whose melting pots have been flowing over. While they're back in buying mode, the glut of unwanted gold and silver being hocked on the secondary market had them turning it down for a time.

"Everyone is still working on the assumption that it is going to keep going up. We’re like everyone else around the world, we literally can’t keep enough stock.''

O'Kane said the gold to silver ratio (currently 33:1) is speculated to move toward 15:1 as prices continue to rise.

In the United States, two of the biggest suppliers ran out of silver recently pushing up wait times for shiny coin collectors in New Zealand to three weeks.

O'Kane said Wednesday waiting times for coins and bars sold through the Mint were back to a week.

Householders trying to capitalise in the silver rally aren't wasting any time. They've been turning up at jewelery stores, auction houses and mini-malls looking to offload unwanted punch bowls and other silver heirlooms before the market crashes.

Serious investors on the other hand are holding a long-term view, said O'Kane.

The Mint itself isn't in the market for anything other than high-grade, globally recognised silver or gold.

"We tend to stick to our own coins predominantly," said O'Kane.

Half price for scrap

Those entertaining fanciful notions of paying off large swaths of debt with antique candalabras and the like could be disappointed. Scrap rates, which is what Grannie's wedding gift would pay, are roughly half the market price.

For that reason, long-time Herne Bay jeweller Ivan Cornelius, cautions cash-hungry desperados against a hasty sell-off of the family silver, particularly the vintage stuff that might have some historical significance.

"People are getting suckered into selling the stuff because of the high price right now, but what they don't often realise, until it's too late, is that they'll only get half of what its worth.''

After 30 years in the business, Cornelius said he's unphased by the highs and lows and hype that precious metals can attract. He recalls a similar frenzy for silver in the early '80s when folks world-wide were purging jewellery boxes, cleaning out the attics and scouring the house for the glitter.

O'Kane said the silver rush was driven by the now infamous Bunker Hunt Brothers who cornered the market at NZ$3 an ounce and drove up the price close to today's highs.
The bubble burst when the Government changed the rules. The brothers went bust and silver fell flat on its face again.

Cornelius admits he's no silver bug, even though he's been tracking the commodity closely for 30 years alongside platinum and gold.

He recommends putting the silver on the scale, calling around to find out what scrap is selling for, then shoping your wares around at local auction houses.

Our conversation has me rethinking plans to make a quick buck with grandma's silver, even if I'll never use it.

It could spare me a severe and never ending lecture in heaven, or hell, when I meet up with grannie next.

Didnt you hear? JPMorgan was bailed out by the tax payer...

Still having trouble with the timeline... I'll work it out (more an exercise in trying to read a story from the web rather than anything else!)

Sell it and re-invest the proceeds into 1 oz silver coins physical and take delivery.

I think I'd agree...unless its to pay down debt....but keeping some cash or other tradeable precious metal makes sense for an emergency....

Just last week I advised my mother to sell her silver.   But I don't think she will.

Hold on to your silver !

One day in the near future New Zealand is turning into a colourful "Takaka Style Flee- Market Barter Society" (TSFMBS), where most everything is tradable - without worthless cash.

Kunst, I like your thinking..hope it's not wishful...bring on the paradigm shift I say.

The long white cloud has a silver lining.

I'm with Steven on this one.

Keep your silver and gold.