Breaking up with your bank is easier than ever but Kiwi customers are a loyal bunch. Is it a sign of happiness or complacency? What's your trigger point?

Breaking up with your bank is easier than ever but Kiwi customers are a loyal bunch. Is it a sign of happiness or complacency? What's your trigger point? 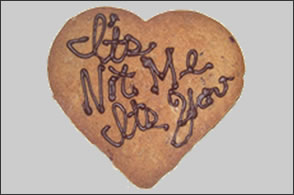 Break ups are messy, tiresome, expensive and often more trouble than they're worth, which keeps more than a few dysfunctional relationships together after they've run their course.

One might imagine banking relationships (the least emotional of all break-ups) to lie beyond the borders of complacency, but apparently New Zealanders are a loyal bunch, even if there is no love.

Despite banking revisions making it easier than ever to make a clean break of it with minimal effort and expense, the uptake of this facility is surprisingly low.

Payments NZ chief executive Steve Nichols said despite industry expectations of customers spitting the dummy on the flimsiest of pretenses, there's been barely a whimper of protest.

"There's been no noticeable increase in switching," said Nichols.

With greater scrutiny than ever on bank profits, it is somewhat surprising that consumers, more empowered than ever, aren't exercising greater choice.

Nichols said it was hard to read, but suggested the simplified switching policies were sufficiently well known if only because they've been in place for almost six months now.

Essentially, the process of switching banks is easier, faster, and less cumbersome.

Where customers used to have to go to the trouble of rescheduling automatic payments and other transactions on their own, that responsibility now rests with the banks.

Bank customers can still opt to take care of the transfer process themselves but the rule change essentially forces banks to lend a hand in the process and move things along quicker if requested to do so.

While banks may take it as a positive sign that few customers are initiating break-ups, it could be that people simply aren't aware of the rule change. Another possibility is that many customers don't realise that they can get a better deal somewhere else.

While there's not much difference in fees with respect to on-line services, there's a significant range in costs associated with other services, including paper statements, bank drafts, teller services, and ATM charges, all of which can add up over time.

Transactions (undesired from the bank's point of view) on on-line savings account is one example. Depending on who you bank with, you can be charged as much as $5 or as little as .50 cents, for manually assisted transfers on an account that is meant to remain untouched.

While banks can be applauded for trying to discourage savers from raiding their accounts, the reality is that people often need access to cash and shouldn't be punished for doing so.

Claire Matthews, a senior lecturer at Massey University, said many banking relationships are maintained because of the false perception of the break-up being hard work.

As part of a doctoral dissertation on the subject, Matthews surveyed more than 900 bank customers about their banking relationships and habits.

While she found that two-thirds had made a switch at some point, another 25-30% expressed a desire to end the relationship. Of that group, only 10 % indicated they would likely pull the trigger, mainly because of the belief it was too difficult to negotiate.

Ironically, those that did change banks found the experience less arduous than they anticipated.

Matthews puts that down to a misalignment between expectation and reality.

The associated cost of changing banks is a case in point. While cited as a chief deterrent for switching, Matthews said the costs are actually marginal.

(For further details see this article by Amanda Morrall)

Any NZer who cares about where this country is heading should switch to Kiwibank. I would be interested to know who the frequent commenters on this site bank with...

or TSB.  It has been around longer than KB.  Also, there are Credit Unions as well

I'm also with TSB and very happy with their service.  I wouldn't touch Kiwibank with a barge pole while Michael Cullen is Chairman.  Which other financial organisation has a Chairman with zero commercial experience.  What value does he bring to the table?

From my perspective --you say Michael Cullen may not have much commercial experience --but I think we have a lot to thank him for. Such as Kiwisaver --he was a strong supporter--and that was the biggest blunder in NZ Politics when Muldoon did not have the savy to see a NZ Superannuation Savings scheme  would benefit the people and provide business with investment capital.  ( Australia won by early introduction of their scheme ).

Also the so called Cullen Fund ---where the Government has stashed away a sizable amount to help pay for National Superannuation --of the Baby Boom Bubble or load.  There is no aother way to say it but -- PRUDENT.

Boards of any Business/Company/Bank are there to set Policy ONLY ---- it is the Hands -On CEO of Kiwi Bank that we have to thank for his expertise in growing the KiwiBank, and we should be proud of that achievement.

I agree. Its easy to change and Kiwibank did all the hard work for me. All I can say is see you later aussie banks and hello Kiwi bank.

It strikes me as foolish to have all ones eggs in one basket - I think the only bank I don't have accounts with are ANZ.

But that is just me I guess.

I don't think Kiwisaver is all that much to cheer about - the only ones who are celebrating are the Govt and the large investment houses. The Govt gets a large pool of money to tax gains on, and the invetsment houses get a guaranteed income stream to invest and pocket fees off.

I think that people may discover that when governments get desperate, kiwi saver money may be targeted for confiscation. Not in the money belongs to the Govt but rolled into govt superanuation or subject to a law change that foces you to buy Government debt.

I for one am praying that this flawed scheme is not made compulsory. I like the ability to manage my own investments.