Other ways of managing looming super costs due to New Zealand's ageing population could include a "super levy" paid out from an increase in KiwiSaver contributions, or a form of income testing that would link NZ Super payments to KiwiSaver balances.

Cullen presented the three options for confronting super costs to a Treasury-Victoria University conference on the Government's long-term fiscal projections. He also said it was inevitable the age of eligibility for NZ Super would be raised from 65 to 67, and that it wasn't too long a shot that KiwiSaver would soon be made compulsory.

Cullen canvassed the options in this paper presented to the conference (See him speak about them in the video above):

While KiwiSaver may make many more people independent of New Zealand Superannuation, it had no impact on the cost of it, Cullen said.

With the number of KiwiSavers already far higher than forecast, it was not a long step to make the scheme compulsory, tighten some of the criteria, and, over time, gear it up to a level far closer to that planned in Australia.

"At that point the relationship between KiwiSaver and New Zealand becomes one for serious discussion. As an example of what could be considered I have had a number of options modelled," Cullen said.

"The models all start from KiwiSaver becoming compulsory from 1 July 2016 with all people signed up as they turn 18 and the opt-out provision on auto-enrolment removed. All remaining adults would be enrolled on 1 July 2020. The contribution rates would be lifted back to 4% [for employees], and 4% [for employers], also from 1 July 2016. Employer contributions would then increase by 0.5% per annum until reaching either 8% in one set of models or 6% in the other," he said.

"As a matter of practicality and individual affordability it may be desirable to begin new entrants on a lower personal contribution rate, say 2%, and gear up over time, but as this has no significant impact on costs or effects over the long term it has been ignored in the model runs."

All his runs assumed that, however made up, retired people would continue to enjoy a guaranteed retirement income at least equivalent to that of New Zealand Superannuation based on the current wage relativity formula.

Cullen said two basic ways of reducing the fiscal cost over the long-term of meeting this criterion were explored.

"In the first, it was assumed that half of the accumulated KiwiSaver savings would have to be accessed by way of annuity. Where this was less than the guaranteed retirement income it would be made up to that level," he said.

"In effect this means that for many people the shift from state funding to private funding would result in half of their KiwiSaver savings being income tested away.

"This could prove difficult to establish and maintain as an acceptable policy position even though it certainly has a substantial impact on the long-term fiscal costs. It also has the usual problems of applying an income test fairly," Cullen said.

"However, the fiscal outcomes are impressive. Under either higher contribution rate modelling suggests the cost of New Zealand Super falls to under 2% of GDP by 2050, all but vanishing by the end of the century. Remember, that is based on only 50% of accumulation being taken by way of annuity," he said. 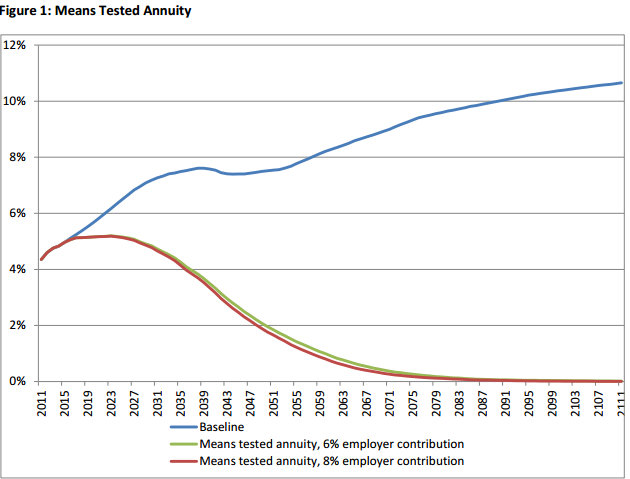 An alternative which Cullen said would have significant advantages in terms of simplicity and fairness, was to deal with the KiwiSaver/New Zealand Superannuation interface on the revenue side rather than the expenditure side.

"Under this proposal, the current New Zealand Superannuation scheme would be maintained as is, with the exception of an initial adjustment to the age of qualification to 67 being phased in starting in, say 2020," Cullen said.

"The revenue offset would come from a withdrawal tax on accumulated KiwiSaver savings of either 10% or 15 %. This withdrawal tax would apply to those permanently emigrating or to the accumulated savings at maturity (assumed to remain at age 65). The tax would only apply to accumulations starting with the introduction of the compulsory scheme," he said.

Such a scheme would be administratively much simpler than the first option, avoid the difficulties of income testing, but by the end of this century would reduce the projected net cost of New Zealand Super by about 5% or so of GDP, having kept that net cost at about 5 % of GDP over the second half of the century.

"Could such a scheme be politically feasible? The answer to that is that anything in this area is fraught with difficulty for obvious reasons. But it does seem to me to have at least as much chance of success as any of the other options that are on the table, either at this conference or elsewhere," Cullen said. 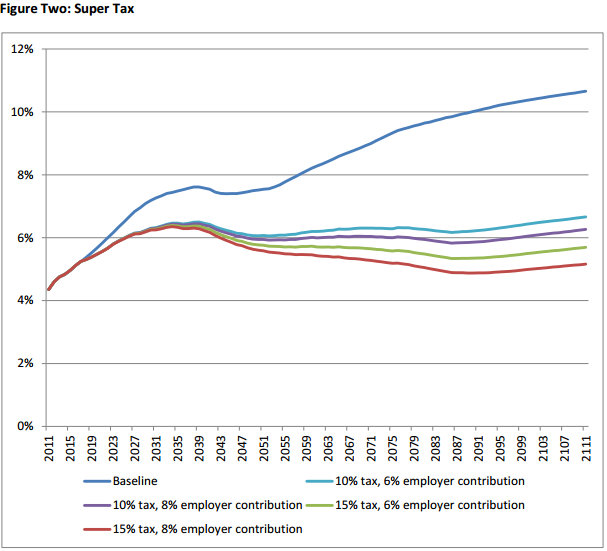 In his speech, Cullen said he had come up with a third option not canvassed in the paper: part of any increase in KiwiSaver contributions could be paid as a ‘Superannuation levy’ directly into the Super Fund.

“That’s a form of public saving as you go to offset the future cost of New Zealand Superannuation," Cullen said.

Cullen also suggested another change which could help secure confidence in the future of New Zealand Super would be to transfer the remaining state asset shares into a holding company owned by the New Zealand Superannuation Fund.

"This would, in effect, bring forward the resumption of government contributions, at a lower rate than previously, but also bring a welcome focus on long term wealth creation with respect to the assets," he said.

Charts with cost projections in there too now

I dont think our economy in 20 years is going to look much like the one we have at present, so I believe projecting out so far is fraut with problems.

I am happy to save for my retirement, Im happy to do that and live with the consequences, I may decide to have a debt free self contained lifestyle block,( nearly there) or i may decide to go like the clappers till i drop of my perch, or I could save like crazy and invest in the next Bridgecorp. I think that should be an individuals choice.

I also dont think we have enough producers to pay for a pension fund, so many people work for the government or councils,rely on them for contracts or funding, people like Mr Cullen.  Too many of us are on the dole or get welfare of some kind including working for families. Too many have little motivation  to make their life better and Im not motivated to help them.

I think many of us will just have to work as long as we can, then just face the music.

I see our state failing on so many levels, its hard to trust it when it talks about outcomes 30 years down the road. I would want to know the tax rate when i withdraw my funds in advance and Id expect  it to be set in stone.

I see our cost of living continues to climb but wages stagnate, i think we need some adjustment in our tax system to advantage those willing to take risk and get to work, I think our high asset values are hindering inovation.

I think we need the goverment to shrink, it grew %40 under Cullen and I dont believe he has a magic bullet, if he has Ive got a good idea what he should do with it.

We need major structural change and we need it about 10 years ago.

Under Labour 1million people were let into NZ, one million people who didnt have to pay for roads, electricity , health care or education, the government failed to budget for the huge implications of immigration and now they think they have answers in other areas. we are lucky to have a big safety valve over the Tasman.

What we are seeing is a continuing fall in government tax revenue so eventually someone is going to have to grow the balls to cut, it certainly isn't any of the present crowd. I belive we will see a fall in exports as farmer trim costs. I dont see a fairy land out there in 20 years time.

For one I believe we have already purchased the SOE's they belong to the people and selling them is an act of sabotage, rearranging them is just shifting chairs on the Titannic.

Come on AJ...tell us what you think Cullen should do with any magic bullet he might have...

He is determined to do his best....to force people to live their lives his way....because he knows best AJ....all socialists know what's good for others...but especially what's good for themselves.

Tell us again how much Cullen is sucking from the taxpayers while double dipping.... thanks to a fool.

AndrewJ [quote]
Under Labour 1 million people were let into NZ, one million people who didnt have to pay for roads, electricity, health care or education. That [labour] government failed to budget for the huge implications of immigration and now they think they have answers in other areas. We are lucky to have a big safety valve over the Tasman

Perfect. How about erecting a [memorial] wall in the middle of Queen St with all 1 million names on it. So we can remember them.

Your plan and expanding the Cullen fund will both have the same short term impact - less money available for short term needs.  The question is whether politicians and the public are prepared to take that short term pain for the long term benefit of people that we don't know and who don't have any voting power - ie, the taxpayers of the future.

KS is nothing more than a glorified benefit that creates the illusion of financial independence. Come actual payday, many KS believers will find out the truth of their only on paper evaporating funds

When will this socialist idiot meet his demise?

I am disappointed that Kiwisaver relies so heavily on managed funds – a characteristic which creates high fees and obviously benefits fund managers. To my knowledge, no low fee index funds (ETF’s) are offered to Kiwisavers. Another concern: If your savings are not invested in a Kiwisaver PIE then returns are likely to be subject to a higher tax rate. This effectively makes DIY savings (like the US 401k) less attractive and once again benefits fund managers. Have I missed something or are we really being ripped off by the fund management industry?