High Court appeals line up against Auckland's potential East-West Link motorway even though the government hasn't publicly confirmed how, when or if it will be built

High Court appeals line up against Auckland's potential East-West Link motorway even though the government hasn't publicly confirmed how, when or if it will be built 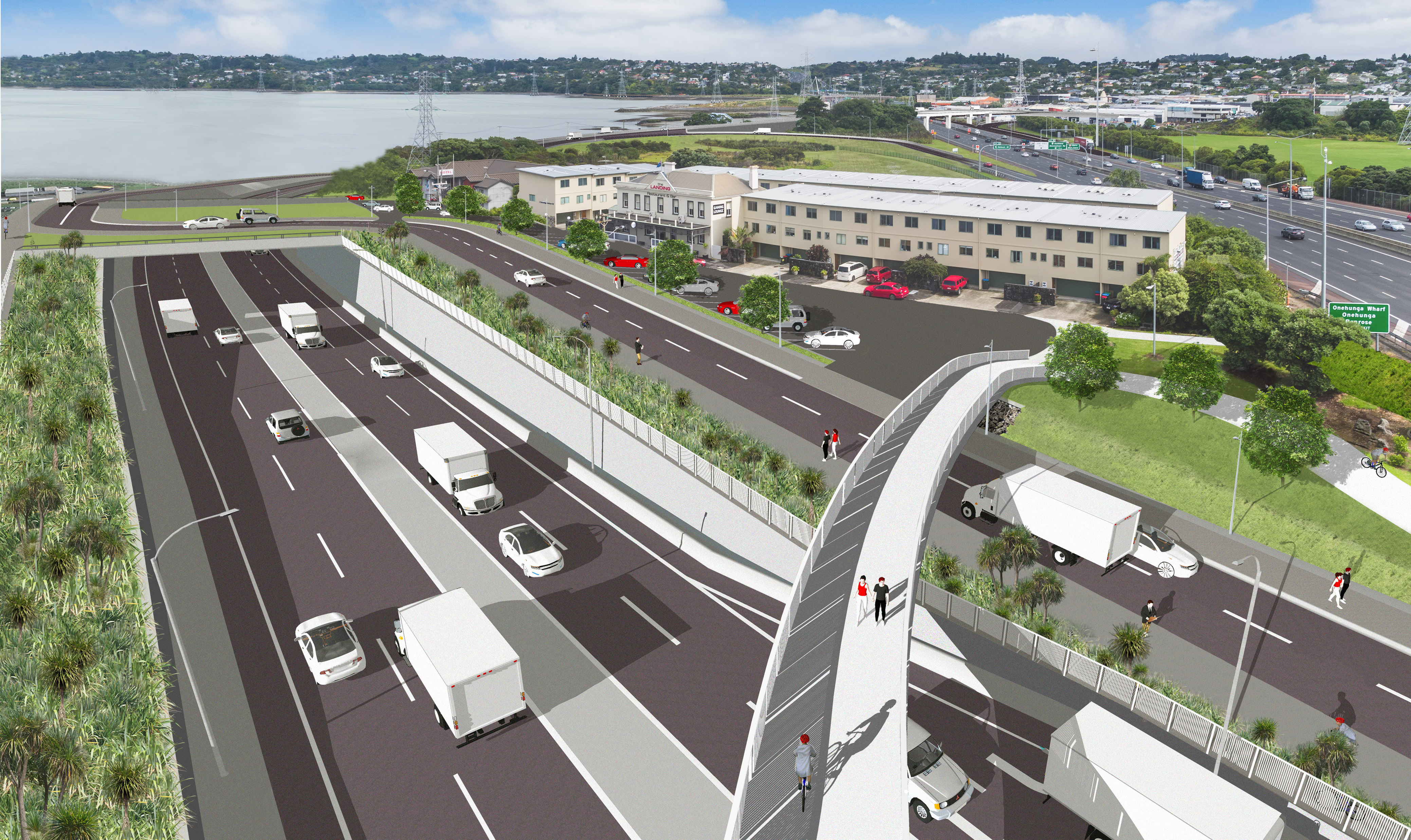 An NZTA artist's impression of the East-West Link which is still under review.

A series of appeals against Auckland’s potential East-West Link are expected to be heard in the High Court next year, and could be yet another major stumbling block for the controversial project.

The project was first unveiled in 2014 by the then National-led government which said it was a way to tackle traffic congestion and link State Highway 20 at Onehunga to State Highway 1 at Sylvia Park in Mount Wellington. The planned four lane highway, which was earmarked as a priority roading project, was expected to cost up to $1.85 billion leading to claims it would be the world's most expensive road costing $327 million per kilometre.

But after the change of government in 2017 the new Labour-led administration announced that it was scrapping the EAST-West Link. It had fallen down the pecking order of Auckland infrastructure projects and Transport Minister Phil Twyford instead redirected a lot of government funding towards public transport.

Nonetheless the New Zealand Transport Agency (NZTA) announced in January last year it had been granted resource consent to proceed with the project. But it said that the consents were enabling and not obligatory. In other words the project can go ahead if and when government funding is secured. According to the agency the project is still under review and the road designs haven’t yet been finalised.

NZTA senior manager of system design Kevin Reid says there are still a number of hurdles they will have to overcome for work to start.

“While the Transport Agency continues to re-evaluate the East-West project we are also continuing with the process to resolve the High Court appeals that have been underway since the Board of Inquiry decision in January 2018, before the re-evaluation process began.”

And Reid says finding a resolution is out of his hands.

“The timeframes for resolving each of the appeals is determined by the High Court.”

Appeals have been lodged by the Royal Forest and Bird Protection Society of New Zealand, Jackson Electrical Industries and Ngati Whatua against the project's resource consent. They are expected to be heard in the Auckland High Court in June next year. According to the NZTA, the Onehunga Enhancement Society Incorporated is a party to the appeals.

Meanwhile a year ago Auckland Council purchased the nearby Onehunga Wharf from its subsidiary Ports of Auckland saying the site would be developed by council development arm Panuku now "the threat of the East-West Link severing the town from the waterfront" had been "removed."

"Onehunga Wharf can plan for a future as a magnet for Aucklanders, with the flavour of a new Wynyard Quarter," Councillor Chris Darby, chairman of the Council’s Planning Committee said at the time.

Reid says the project underwent a review in 2018 to ensure it was aligned with the new Government’s priorities as set out in its Government Policy Statement (GPS) on land transport.

“The Transport Agency presented an update on the East-West Link re-evaluation to its Board in March 2019 who have recommended further investigation.”

He says the exact form the project takes remains up in the air, despite the fact the government has allocated $800 million for the project in the ATAP budget. Something he's more than aware of.

“As our website says in relation to re-evaluations, work on these projects may proceed as originally planned, be staged differently or explore lower cost options,” Reid says.

One party which has stated its opposition to the proposed East-West Link project is Forest and Bird. Auckland regional manager Nick Beveridge says the environmental cost of the East-West Link is too high and, thus it is pressing ahead with a High Court appeal against the project’s consents.

He says the NZTA has confirmed the plans include a new arterial road from Neilson Street to Sylvia Park Road, through Angle Street and Miami Parade, that is likely to cross Anns Creek.

“This highway would be built through an area that is home for incredibly special birds, including critically endangered Australasian bitterns, banded rails and wrybills – and there are only 5,000 wrybills left in the world,” Mr Beveridge says. “The wetlands provide a feeding area for migrating birds, which are facing increasing threats around the world.”

Beveridge says he thinks it’s unlikely the highway can be re-designed to meet the Government's new $800 million budget.

This project doesn’t align at all with the new Government Policy Statement on Land Transport. It is going nowhere under this government, regardless of what happens in court.

This would have been an important link to connect the city to the airport and as a key link for the inland port. Oh well...continue to pour traffic and especially container trucks into surounding suburbs.

Or build a heavy rail link to the airport. What - it needs to cross some creek populated with a lotta Rare Boidies? Pfft - steel wheels Good, rubber tyres Bad.

Didn’t we just spend 2 billion on an important road linking the airport (waterview tunnels)? How many important airport road links do we need before we bother to build some public transport links?

"The world's most expensive road." What the hell is it with massively inflated construction costs in New Zealand?

From the picture it looks like some of it it needed to be put in a trench to satisfy "environmental concerns".

Maybe because Auckland is the only western world city planning a new motorway along the waterfront in the 21st century?

What a horrible location Onehunga Wharf is! In a wind funnel with muddy seawater. Chris Darby can live there if he wants to move there from Stanley Pt.

Classic example of the backward thinking that kneecaps this country time and time again. Cities around the world are de car-ing (its a new word) and de roading and putting up urban rail transport links faster than you can injure sonny bill willisms these days and what do we do? Build 4 laners everywhere. Well it kind fits given we elected a former merchant banker in the middle of the gfc...because THAT worked so well!