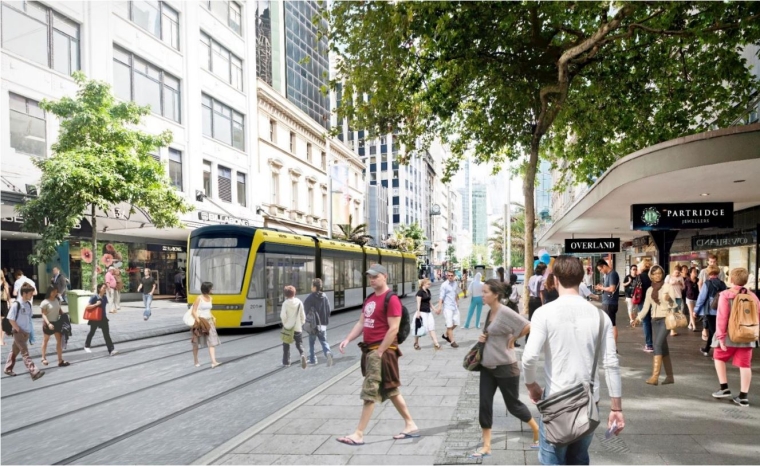 An overheated infrastructure market and demand for similar projects on both sides of the Tasman will affect the real cost of Auckland’s light rail project if it gets the go ahead early next year.

That’s the message from recently appointed NZTA chairman Brian Roche. The Ministry of Transport is now expected to consider two bids for the project from the NZTA and NZ Infra. The Government is then expected to decide which proposal it will go with early next year.

In an interview on RNZ’s Morning Report on Tuesday Roche, who took up the NZTA chairman’s role in June, said the agency had dropped the ball, frustrated ministers and delayed the light rail project’s process. But he said after a "refresh" of the agency’s board and the appointment of a new chief executive things are back on track.

Roche also discussed the potential cost of such a massive project without giving an exact estimate of how much it will cost.

“There are a number of figures being bandied around, but none of them are fixed quotes,” Roche says. “They are just estimates. That’s something the ministry will be looking at really closely.

“The infrastructure market is very, very heated and there’s a significant amount of demand in Australia for projects of this nature. If this gets the go ahead we would be competing on an international basis.”

And whether the projected cost is the $6 billion previously quoted by Transport Minister Phil Twyford, or the $10 billion plus estimated by some critics, it will probably be the biggest transport project in New Zealand history if it gets the green light.

“The issue of cost can’t be ignored, but you also have to consider the value it will bring. This is a transformational project. It will change the way people think about the rapid transit of people. Cost is always going to be a factor, but the value and what it can contribute to the travelling public is probably underestimated.”

But despite Roche and Twyford's enthusiasm for the light rail project, the overall lack of progress and ongoing delays has seen the National Party opposition now calling it “KiwiBuild 2.0”. Twyford’s role in failing to meet his own targets in terms of the number of KiwiBuild houses he promised to deliver led to him losing his housing portfolio in the latest cabinet reshuffle. He will be hoping to at least decide which bid to go with next year so he can show some progress has been made on the project.

This week’s latest developments have followed a series of stories on Stuff which have referred to a leaked early proposal from the NZ Super Fund and a letter from the NZTA referring to its scathing assessment of the fund’s proposal.

In the run up to the 2017 election Twyford said a Labour-led Government would deliver light rail from the CBD to West Auckland and to the Auckland International Airport within a decade, with longer term plans to extend the network to the North Shore. He estimated that the Auckland project would cost about $6 billion, making it the biggest transport project in New Zealand history. Then in May last year the Government directed the NZTA to lead the development of the light rail project in Auckland. It was expected to work with the Ministry of Transport and Treasury to assess all potential proposals.

The Government had said it was willing to fully fund the project.

But no sooner had the NZTA been given its brief than the NZ Super Fund approached the government with an offer to fund, design, build and operate the light rail network in partnership with Canada’s Caisse de depot et placement du Quebec (CDPQ). And NZ Infra is the joint venture they have since established to bid for the project.

Then in May the Government announced that the Ministry of Transport would be taking over the lead role for the project and it would handle the bids from both the NZTA and NZ Infra. After initially promising to include a light rail line from the CBD to West Auckland, the focus now seems to be on building a line from the city to the Auckland International Airport at Mangere first.

1) High infrastructure costs - Run an excessively high immigration rate policy & what do expect. The immigration rate needs to be bought down to something sustainable aimed at maximising gdp/capita & social economic welfare benefits.

2) Based on a social cost benefit analysis of the welfare benefits to NZ it is more than likely there are much better ways of spending $6 bn. The light rail project is a political solution looking for a problem. Implementing congestion tolling first would be far more beneficial and better support PT patronage whilst further delaying expensive roading infrastructure

Congestion charging is obvious. It needs central govt to build the central database - linked to Rego data. Then councils and the police can build their interfaces: not just who is driving over the bridge and when and what to charge at that time of day but also parking & speeding infringements. If Trademe can do it why not our govt?

Congestion tolling doesn't work when there's no alternatives to driving. It just increases people's cost of living AND they still get stuck in congestion.

What you have there is a tax on going to work.

Will any reputable contractors even want to get involved with the project given how this government has stuffed around the businesses that have spent significant sums (millions of dollars in some cases) preparing bids for the work and developing plans thus far? This government is an embarrassment and is ruining our reputation as a good place to do business.