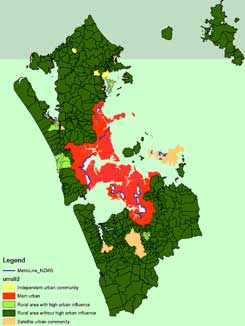 The author of a report on high Auckland land and house prices has recommended to the 2025 Productivity Taskforce the extension of Auckland's Metropolitan Urban Limits (MUL) as one way to remove roadblocks to the development of New Zealand's biggest city.

Motu economist Arthur Grimes told the taskforce that Auckland's development was at risk from being stifled by high house prices, with current policy settings around the MUL making houses more expensive. The MUL can be seen in red in the graphic on the left.

Auckland is land-rich, Grimes said, adding that the MUL could be extended around existing infrastructure such as the Northern Motorway. This would have the double effect of lowering Auckland house prices and creating more space for productive 'urban' activities not allowed outside the boundaries in rural zones. 'Urban' activities not allowed included setting up factories or housing, or even schools in rural zones.

In a previous Motu study with Yun Liang, Grimes and Liang found that land just inside Auckland's MUL, or growth limits, was valued at approximately 10 times land that is just outside the boundary.

The earlier study looked at land value increases between 1992 to 2004. Here is a 2008 working paper from Grimes and Liang on the Northern Motorway extension.

Lower land prices would make it less expensive for businesses to operate inside the expanded boundaries, and lower house prices would mean workers would be better able to afford to live in the city rather than being forced away by high prices. Grimes recommended Auckland's growth limits should be reviewed in a more flexible manner, rather than having long periods between boundary reviews, especially because of the increase in Auckland's population (38% between 1991 and 2006).

"Auckland is a polycentric city with a population that grew, on average, by 2.2% between 1991 and 2006 (census years), a 38% increase. Simple application of growth limits, with long periods between boundary reviews could, under these circumstances result in considerable inefficiencies and inequities, including problems of housing affordability (Grimes et al. 2007). Our results therefore imply that growth limits within Auckland should be reviewed in a flexible manner that accounts for the impacts of an increasingly binding constraint," Grimes and Liang said.

The MUL was formally adopted by Auckland in 1998, although these boundaries reflected earlier growth limits, Grimes and Liang said.

"A study by the Auckland Regional Growth Forum (1999) [ARGF], conducted shortly after formal adoption of the MUL in 1998, examined the historical use and impact of growth limits in Auckland. It noted that MULs have been used for the past fifty years in Auckland, so their use under the 1998 Regional Growth Strategy is not new," they said.

"In earlier years, the prime motivation for their use was to avoid inefficient and expensive provision of urban infrastructure but "in more recent times the emphasis has switched to protection of the environment in the area outside the MUL" (ARGF, p. 4)."