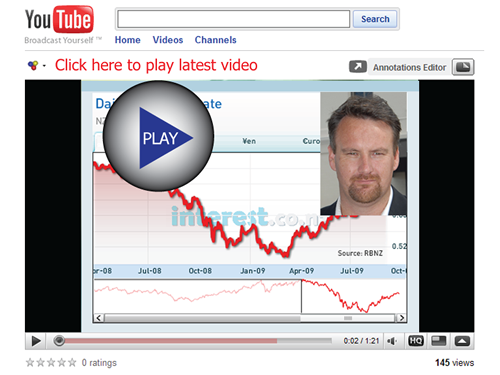 Click here for this morning's video.
Bernard Hickey details the key news overnight in 90 seconds at 9am in association with ASB, including news in the NZHerald that the High Court in Auckland found Mark Bryers bankrupt yesterday.

He made a settlement offer just before his court hearing of less than 1 cent in the dollar. Creditors include Westpac, Bridgecorp, Peter Francis and Jamie Peters. Bryers can now keep NZ$1,000 in cash and drive a NZ$5,000 car. He cannot be a director or run a company any more.

Meanwhile, South Canterbury Finance has released its audited accounts, which show the auditors have significant concern about South Canterbury's ability to continue as a going concern. It's bank loan has been shut off.

Companies office records show that three other companies (Little Cow Company LLC, Pals Plus LLC and NZ Cow Company LLC) own a further 25% of Dairy Holdings. These three companies are based at 39 George St in Timaru, which is the same address as Allan Hubbard and South Canterbury Finance.