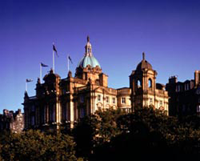 Shares in Britain's largest mortgage bank, HBOS Plc, fell as much as 70% overnight before it emerged that it was in talks to be rescued and bought out by Lloyds TSB. (Updated to include comments from Strategic CEO Kerry Finnigan) HBOS shares slumped as concerns mounted about its exposure to the collapsing British housing market and its ability to raise fresh capital easily on stock markets. HBOS shares have fallen more than 90% in the last year and its market capitalisation is now at 9.5 billion pounds or less than 1.4% of its assets of 681.4 billion pounds. There is a strong New Zealand connection for HBOS (Halifax Bank of Scotland) because its corporate finance subsidiary, BOS International, has lent at least NZ$1.5 billion here to finance companies and various property developers. Many of the investments behind those loans are in trouble.  Lloyds TSB said overnight it was concerned about some of the commercial property lending done by HBOS. It is unlikely it would keep BOS International if the takeover is successful, given Lloyds' less aggressive appetite for risk and its focus on the UK market. There had already been speculation that HBOS may be forced to sell some of its more far-flung subsidiaries, including its BankWest operation in Western Australia and BOS International. One suggestion was that HBOS could swap BankWest and BOS International's Australasian operations with National Australia Bank (NAB) in exchange for NAB's banking assets in the north of England (Clydesdale Bank and Yorkshire Bank). HBOS is based in Edinburgh and has a strong presence in the North of England. The potential fallout from an NAB takeover of BOS International or any wider problems for HBOS could be significant. BOS International has lent to various finance companies in New Zealand, including Strategic Finance, Geneva Finance and Dominion Finance. Strategic and Dominion have suspended debenture repayments and interest payments, while Geneva is working through a delayed repayment plan. The Sunday Star Times has previously reported that BOS International has also lent to property developers. They include; Landco with NZ$365 mln, IMF NZ with NZ$355 mln, Cornerstone Group with NZ$155 mln, Infinity Group (Pegasus Town) with NZ$150 mln, Gulf Corporation with NZ$100 mln, Babcock & Brown Infrastucture with NZ$125 mln and Grasshopper Group with NZ$30m. BOS International has lent Strategic Finance NZ$150 million and is backing the management led buyout of the property financier from its Australian parent Allco HIT. Strategic CEO Kerry Finnigan told interest.co.nz in an email it was too early to say how the purchase of HBOS might affect the Strategic deal. "We have not been told of anything that would give us concern that this transaction is at risk, but clearly in the magnitude of issues that HBOS must be dealing with we would be low on the priority," Finnigan said, adding the market would be informed of any developments as soon as they came to hand.  BOS International lent Dominion Finance NZ$70 million (ASB lent Dominion NZ$20 million) and lent Geneva Finance NZ$43 million. This total of lending and forgone interest on frozen finance companies and developers is now well over NZ$1.5 billion.

This what the FT reported about HBOS after the share price collapse.

HBOS has wholesale financing commitments of £278bn, of which £167bn have a duration of less than one year. Citigroup analysts estimated on Tuesday that HBOS had a funding gap of £197.8bn. They also estimated that HBOS had £29bn of term funding maturing as of the first half in 2008 and about £24bn it needed to refinance each year.

Here is the full copy below of the Standard and Poor's statement downgrading HBOS.

Standard & Poor's Ratings Services said today that it lowered its long- and short-term counterparty credit ratings on U.K. bank holding company HBOS PLC to 'A+/A-1' from 'AA-/A-1+'. At the same time, Standard & Poor's lowered its long-term counterparty credit ratings on HBOS' main rated subsidiaries Bank of Scotland PLC, BOS International (Australia) Ltd., and Clerical Medical Investment Group Ltd. to 'AA-' from 'AA'. At the same time, the 'A-1+' short-term counterparty credit ratings on Bank of Scotland PLC and BOS International (Australia) Ltd. were affirmed. Furthermore, the long- and short-term counterparty credit ratings on Bank of Western Australia Ltd. were lowered to 'A+/A-1' from 'AA-/A-1+'. The outlooks on all entities are stable. Separately, the rating and outlook on 60%-owned subsidiary St. James's Place U.K. PLC (A-/Positive/--) are unaffected by this action. "The rating action reflects Standard & Poor's opinion that HBOS' financial profile is less well positioned to manage the deteriorating operating environment than 'AA' rated global peers. The primary banking entity of HBOS is Bank of Scotland PLC, which is now rated 'AA-'," said Standard & Poor's credit analyst Nigel Greenwood. "The main differentiating factor in our view is credit risk. This reflects the sizable role for both specialist and high loan-to-value (LTV) mortgages in HBOS' U.K. mortgage book and its weaker profile corporate book. We also note that earnings may be constrained by higher funding costs given that HBOS is less well positioned," added Mr. Greenwood. HBOS' ratio of total loans to customer deposits, 178% at June 30, 2008, is higher than many similar rated peers. Earnings will also be affected by weaknesses in its corporate investment portfolio, and further credit market-related write-downs, which cannot be ruled out, add to this pressure. Standard & Poor's recognizes that HBOS' proactive repricing particularly in its retail book will moderate any impact on its preprovision earnings. The U.K. housing and mortgage markets are in the midst of a period of severe strain and some further deterioration seems likely. We consider that HBOS is less well positioned compared with major U.K. peers given the composition of its U.K. mortgage book, which accounts for over one-half of its total loan book. HBOS states that about 28% of its U.K. mortgage book comprises specialist mortgages (mainly buy-to-let and self-certified, but also near-prime mortgages). With U.K. house price declines appearing to accelerate, we consider that negative equity could become a material issue. HBOS has reacted to the deteriorating market conditions by progressively tightening lending criteria, scorecards, withdrawing riskier products, and improving collections capabilities. New lending can therefore be considered much more conservative, although we note that in the first half of 2008 net specialist mortgage lending exceeded net mainstream lending. The corporate book is a further cause for concern. We consider that the overall profile of this book is weaker than peers'. In addition to rising loan impairments we also expect earnings to be affected by lower revenues from HBOS' corporate investment portfolio. This comprises a number of private equity style investments across the capital spectrum and contributed about GBP1 billion or 8% of group net operating income in 2007. While the portfolio is well diversified by number, type, and vintage, performance weakened markedly in the first half of 2008 reflecting reduced exits, weaker trading performance, and impairments on investment securities. We expect these trends to continue. The ratings on HBOS continue to be supported by its major U.K. retail franchise, good diversity by business line, and a track record of good efficiency. Standard & Poor's believes that there has recently been a sensible realignment of HBOS' risk appetite, reflecting management's expectations that difficult conditions across most of its business lines will linger. HBOS is keen to reduce its funding requirement and improve the proportion of deposits within its funding mix and also reduce the balance sheet intensive nature of some of its business lines. In particular, capitalization, which had been weaker than many similarly rated peers by Standard & Poor's measures, is now better positioned. This results from a range of recent initiatives, most notably the completion of a GBP4 billion rights issue in July 2008. While the rights issue was clearly welcome from a ratings perspective, the fact that it was achieved without the strong support of existing shareholders indicates that financial flexibility is weak. Together with the new low asset growth appetite, we are expecting HBOS to maintain at least satisfactory capitalization through a period of difficult earnings. "The outlook is stable and this reflects our view that HBOS' financial profile will be anchored by its improved capitalization and enhanced focus on deposit gathering across its business lines. The stable outlook allows for a degree of future earnings volatility and further credit market-related write-downs," added Mr. Greenwood. The ratings could be lowered if HBOS fails to improve margins as planned, suffers from outsized loan impairments or credit market-related losses, or if funding pressures emerge. HBOS has stated that it will consider selective business disposals. We do not expect that such action would support a near-term upgrade given our expectation that difficult operating conditions will linger. Conversely, failure to sell would not lead to a downgrade. Over time, resilient earnings and asset quality could be beneficial to the ratings, however.