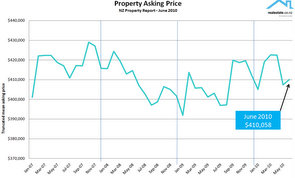 Rental property investors appear not to have been panicked yet into putting their houses onto the market by taxation changes in the May 20 budget, figures from realestate.co.nz's monthly report for June show.

However, the seasonally adjusted number of new listings coming onto the market rose slightly in June from May at the same time as inventory fell, suggesting a number of properties were withdrawn from the market having not sold.

"The truncated mean asking price for June at NZ$410,058 (up from NZ$407,349 in May) would seem to indicate a staunch position taken by sellers as the revised level they judge to be the “market”, not requiring further adjustments down in price at this time," realestate.co.nz CEO Alistair Helm said in the report republished on unconditional.co.nz.

"The budget announcement in mid May regarding property investment had the potential to impact the supply side of the market in terms of new listings in June and July. Whilst the level of new listings in June was up on a seasonally adjusted basis, the asking price expectation change would not be seen as reflective of the impact of rental properties coming onto the market, as this would likely be seen to drag down the truncated mean price whereas the case was that the asking price level edged up in June," Helm said.

The level of unsold houses on the market at the end of June totaled 51,916, barely changed from the May total. See all data here.

"This represented the equivalent of 45.3 weeks, as assessed on a seasonally adjusted basis. The inventory levels are beginning to fall, having risen to their peak in April at 51.6 weeks of equivalent sales. The volume of new listings coming onto the market fell again in June to 11,106 – down 5% from May, however when the expected winter slow down is factored in with a seasonally adjusted factor, the true state of the new listings market shows a 5% increase."

See more detail from the report below:

This situation is best seen from the perspective of inventory levels – 35 weeks of equivalent sales volume on the market a year ago compared to 45 weeks today.

With consolidated long-term data indicating 38 weeks to be the national threshold between a market favourable to either sellers or buyers, current inventory levels continue to show that New Zealand property remains a buyer’s market.

The asking price expectation has moved little in the past month following the more significant drop between April and May. At the time this was judged to be a pragmatic reaction by sellers eager to “meet the market” in price terms and seek to attract what continues to be a weak level of buyer activity. The truncated mean asking price for June at $410,058 would seem to indicate a staunch position taken by sellers as the revised level they judge to be the “market”, not requiring further adjustments down in price at this time.

“Although the national market favours buyers, there are pockets emerging around the country that may soon favour sellers. In fact, Nelson has already become a seller’s market with inventory levels below the long-term average,” said Mr Helm.

At that time in June 2009 the market was experiencing a listings’ shortage as well-financed buyers where negotiating hard with sellers keen to offload their property as property prices had fallen through late 2008 and early 2009, and uncertainty surrounded the future direction of pricing in a market so accustomed to property price appreciation.

The last thing this country needs right now would be, say...a mega-quake...

You must be wondering if you caused it!