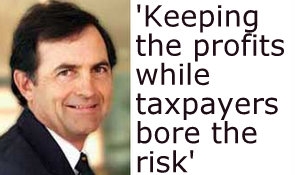 <p> A bid reported to be from Duncan Saville for SCF would have seen the taxpayer loan his company the money needed to buy SCF and see any profits from asset sales retained by Saville rather than the government.</p>

Treasury decided that the main bid on the table for South Canterbury Finance, which has been reported as coming from Sydney businessman Duncan Saville, was not acceptable because it did not offer cash to the government up-front, and Saville would keep any potential gains, rather than the taxpayer.

The deal was recommended to the government by South Canterbury.

A report presented to Treasury by its advisors Korda Mentha on August 26 said South Canterbury Finance estimated the Crown's potential loss under this deal at approximately NZ$335 million.

"SCF promotes [...]’s offer as crystallising the Crown’s loss. This is not correct," Korda Mentha said.

"[…]’s proposal does however cap the Crown’s recoveries. The Crown’s loss cannot be lower because any upside will be retained by Newco [a term for a Saville entity to be set up for the process] (as the Crown can only ever recover the amount of its loan to Newco, which is fixed at 31 December 2010)," they said.

"In essence, the Crown carries the downside risk under this structure but has no ability to access any potential upside."

The sale price of the deal would be in the form of a government loan to ‘Newco’ – the new company to be set up to own SCF, the report says.

It said an investment would be made by "a New Zealand domiciled entity incorporated in August 2010 that we assume is associated with [...]".

Permanent Investments Limited is a company associated with Saville, and was incorporated on August 9, 2010, according to the Companies Office.

"[...] will invest [...] in SCF and SCL [Southbury Corporation Limited] via secured convertible notes which will be used to repay the facilities."

Another report, prepared for Treasury by Tim Robinson Limited on September 1, said the deposit would have been used to meet "certain specified charges (such as unsecured creditors) with the residual to be transferred to SCF as working capital".

"Hence, the deposit would not be received by the Crown so the amounts it would receive are the instalment payments…,” the Robinson report said.

Crown would buy bad loans, then sell them back at discount

The Korda Mentha report goes on to say that under the proposal, the Crown would "purchase [...] of Bad bank assets from SCF at their current book value (i.e. prior to any additional impairment provisions)."

"SCF will use those funds to repay maturing debenture stock," the report says.

"The Crown will sell the Bad bank assets to [...]'s subsidiary ("Newco") at a value equivalent to the NPV [net present value] of their estimated cashflow, discounted at [...]."

Although some of the text above was censured in the Korda Mentha report, a diagram beside it says the Crown would sell the Bad book back to Newco with 100% vendor finance, with the purchase price adjusted for impairments, "disc 16%".

Back and forth between Treasury and Maier

A letter exchange between Treasury and SCF CEO Sandy Maier outlined Treasury turning down the bid.

"I am responding to your request on 26 August 2010, in which you sought Crown support to for a recapitalisation proposal involving Permanent Investments Limited.

"In regards to your request, we have considered your proposal and have consulted with the Minister of Finance. We can confirm that we are unable to provide the support you have requested."

On August 27, Maier responded, saying SCF was surprised at the decision. The letter included:

FISCAL OUTCOME COMPELLING FOR THE CROWN

In SCF’s analysis the proposal presented will result in an ultimate loss or shortfall to the Crown of approximately $250-300 million. This compares with SCF’s estimate of a shortfall under receivership of up to $700 million. SCF’s CEO Sandy Maier has 35 years of experience in dealing with troubled asset and finance entities, including in his role as Statutory Manager to DFC, an organisation of similar size to SCF.

In Sandy’s opinion the outcome from a receivership for SCF will be anything but a straightforward process given the nature of the assets in SCF and their lack of liquidity or appeal to other entities at values anywhere near carrying values.

On fiscal grounds alone, SCF believes the proposal presented to the Crown is compelling as it quantifies the loss on SCF to a smaller than expected amount and therefore provides strong validation of the decision to support SCF.

Treasury's response was that issues raised by Maier in his reply had been considered by Ministers,

"The government does not share SCF's views on the costs to the Crown of the recapitalisation proposal and I can therefore reconfirm that the Government is unable to provide the support you have requested and is not prepared to entertain any similar proposals," Treasury said.

Earlier this week Finance Minister Bill English rubbished talk of a credible bid for South Canterbury Finance around the time of receivership:

"What I can say is that there was no particular bid put in front of government that was recommended by The Treasury," English said.

"There’s been quite a lot of speculation both from bidders and from commentators that there was some magic solution put forward that the government didn’t accept. That is simply not correct," he said.

"You can imagine that where the government has been facing the risk of paying out one and a half billion dollars, there was no way we were going to be pushed into some kind of cheap, opportunist sale."

An August 2009 memo from Treasury to the Minister of Finance recommended that the most at-risk firm covered by the guarantee should be let fail and that the question was what mechanism should manage the unwind - receivership or statutory management.

"Our advice is to let the failing firm fail. Our assessment is that, while there may be a liquidity problem, the underlying problem is capital and it is equity that is required," it said in the memo.

However, if the government were to not let the entity fail, there were three options presented:

1. For the Crown to buy the firm and put in its own management team

2. For the Crown to put equity into the firm and take an ownership stake - this was considered the "worst of all possible interventions to make in this specific case".

3. For Crown to support a third party putting equity in the firm. However, the memo stated:

It is unlikely a third party would come in with the amount of equity we consider would be needed to put the firm back on a stable footing (around $500 million).

What hasn't been tabled is that Saville wasn't the last deal at the table ( pre receivership ), nor the best - that was the deal that Sandy Maier, the SCF board and Forsyth Barr favoured - but it was $100M less than the best deal. Why was that??

New Zealanders must keep their heads in this receivership and there must be no fire-sales. Its taxpayers money after all . There is no need to rush the process or accept the first offer on the table . The Aussies have a rape , pillage and plunder attitude towards New Zealand. Some assets in SCF are good assets , and could be national assets such as apple and Kiwifruit farms . Hell , we could even list some of them on the NZX