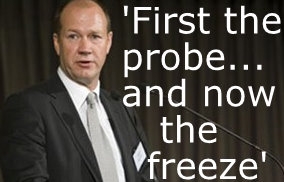 In a statement the Commission said the application was granted without notice to Hotchin last Friday, December 10. It covers New Zealand assets believed to be associated with Hotchin.

"Mr Hotchin intends to apply to revoke these orders. A hearing in that respect is expected in February 2011," the Commission added.

"The action was taken under sections 60G and 60H of the Securities Act with a view to ultimately freezing sufficient property and assets of Mark Hotchin to meet any civil claims that may be brought by investors. Any such claims would relate to those who invested in Hanover Finance, Hanover Capital and United Finance on the basis of any disclosure documents that are proved to have included untrue statements."

"This is a purely preventive measure that is in no way indicative of civil or criminal liability or of the Commission’s views in that regard. The Commission’s investigation has not concluded."

Hotchin released a statement in response to the Commission's action via his law firm Chapman Tripp. In it Hotchin said, Hanover Finance was advised by the Commission last Monday, December 13, that the regulator had obtained - without notice - freezing orders in respect to certain New Zealand assets it believed to be associated with Hotchin. (Read the full statement below).

In an unusual move the Commission revealed last month that it had nearly completed an investigation into the Hanover group of companies and might lay criminal charges against directors in the New Year.

Then, a few days later, the Serious Fraud Office said it was investigating at least four or five Hanover Finance transactions with a particular focus on dividends shareholders Hotchin and Eric Watson paid themselves prior to the company freezing investors’ money in July 2008, and debt restructuring before Hanover's finance book was sold to Allied Farmers.

Hanover froze NZ$554 million owed to 16,500 investors in July 2008. Investors' subsequently approved a moratorium proposal in December 2008 that pledged to pay them back over five years. Then a year later after getting back just 6 cents in the dollar, Hanover investors agreed to swap their Hanover debentures for shares in Allied Farmers valued at 20.7c each which are now worth less than 2c each.

Valued at NZ$396.2 million in last December's deal, Allied Farmers had slashed the carrying value of the Hanover assets it acquired by more than NZ$300 million by June 30 to just NZ$94.3 million.

Hanover paid dividends to its shareholders of NZ$86.5 million in the two years ended June 2008.

Hanover Finance confirms that it was advised by the Securities Commission on Monday 13 December that the Commission had obtained without notice freezing orders with respect to certain New Zealand assets it believed to be associated with Hanover director Mark Hotchin.

A power to seek such orders was introduced into the Securities Act in October 2006. Freezing orders have not been made against any other director or former director of any member of the Hanover group.

Mr Hotchin is applying to revoke the orders, and a case management telephone conference was held in chambers at the Auckland High Court this morning to discuss a timetable for hearing the matter in February 2011.

Mr Hotchin has been advised by the Commission that it has not completed its investigation, or made any determination on whether or not it intends to proceed with civil or criminal action.

Accordingly Mr Hotchin’s lawyers requested a more reasonable time for a response, and the Commission has agreed to extend the timeframe for providing that until the end of January 2011.

As the matter is before the Court, and the investigation is said to be incomplete, Hanover and Mr Hotchin do not propose to make any further comment at this time.

Tee hee. Couldn't have happened to a nicer person.

What about Eric Watson? I know he was not a director but he took massive dividends from the Company and has made a career out of ripping people off.

Watson does have assets here, but they are all tied up in trusts...  most of his assets are offshore I believe, thus not able to be grabbed by this piece of legislation.

I'd bet a good chunk of his money is overseas/in trusts/in her name. It the unlikely event that he was bankrupted here he probably will still live out his life in luxury.

Proving 'Deemed Director' status can not be that hard with Watson. I bet he was at the Board meetings, I bet the Securities Commission can find some kind of smoking gun emails to prove his influence on Hotchin & Muir.

You see... this is wht I don't get.  The Sec Com have had these powers to freeze assets since 2006 and it is only now that they are getting used...

Its now that the Sec Com didn't have the powers, it more than the Sec Com chose not to use them....

Seriously! How many unencumbered ' assets' do you think MH or EW have left in Kiwiland?! Whatever they are, I'd suggest they are matched by debt that will be left behind if either party depart NZ for good.

Bendon for one...  Watson has quite a few assets in NZ...

Watson has been living in London for several years already - he has already 'departed'...

MH isn't a dumbass - judging how he passed on his liabilities onto Allied Farmers, I doubt if he has much asset left in NZ.. may be just some loose change!

the horse has already bolted..this is just window dressing and a 'cake throwing' exercise to please the peasants!

I'm starting to wonder if the State in New Zealand is on the way to this:

with the SCF debacle?

It's all rather meaningless and this is more a PR exercise for the Securities Commission and 'Plane Jane' Diplock (not to Cactus Kate for that moniker) than a move to prevent Hotchin squirreling assets offshore. As if Paratai Drive is going to sell before the end of January. Yeah right.

Good luck getting assets of this guy..he quite possibly placed his assets out of harms way around the same time Hanover were advertising like crazy on TV...remember the ads with the Feelers song - Look out on the brightside! Look out to the world!

We need legislation like the " Forfeiture of the proceeds of crime"  acts that some countries  have .

This will enable authorities to prevent people hiding the proceeds of crime such as  fraud, etc ,  in trusts and other complex structures .

The US has been particulary succesful in this regard and I think Canada and Britain have similar legislation.

National would win the next election easily if they cracked down on this , because the average Kiwi is fed up withthis whole fiasco , and are expecting action .

Also , if John Key is serious about making NZ a financial hub for fund managers , he had better show he is seriuos about preventing  financial malfeasance .

Was tempted to post a comment showing my pleasure at the above news, but have to agree regards the fact that all assets are probably already shipped offshore or hidden away. Still as much as I'll put myself in the peasant class here, would be nice to see the p***k bankrupted, even if it is just on paper.

I bet Hotchin is on a flight to Belize or Monacco as we speak. He won't do any time and will loose a tiny fraction of what he stole.

I expected the knives to come out for Hotchin, despite the fact he hasn't been proven to have done anything illegal. It's a different tune to that sung while everyone was getting "rich" from property. Cactus Kate's  perspective on this is one of the better I've read to date.

Bet ya, only one comes out smiling is the lawyers.

MH smelled a rat when he shifted out of NZ last year...

Chapman Tripp, acting for Hanover Finance and related entities, has today served legal proceedings on Allied Farmers in relation to the refusal by Allied Farmers to pay Hanover $5 million on the basis that Hanover committed serious breaches of the agreement assigning its assets to Allied.

As previously announced, Allied Farmers had determined that it was entitled to cancel the contract under which the claimed payment would otherwise have been made. Allied Farmers' position is that no further payment is due, and will not be making any further comment given that this matter is now subject to litigation. The hearing is set down for 24 February 2011.