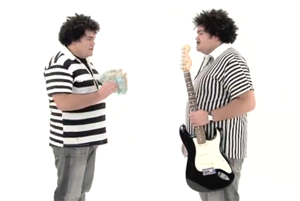 The Advertising Standards Authority (ASA) has upheld a complaint against Cash Converters for a television advertisement that promotes cash in exchange for goods without directly spelling out the interest charged on the transaction.

The complaint was laid with respect to an ad showing a man handing over a guitar to his double, dressed as a dealer from Cash Converters, in exchange for a fistful of cash. The next scene shows the opposite exchange with the guitarist reclaiming his instrument.

The commentary reads as follows:

It said Cash Converters worked very closely with its advertising agency on the commercial which was designed to promote its pawn broking facility.

A minority of the Advertising Standards Authority board concurred with Cash Converters that implicit in the word "loan" was a requirement to pay a percentage of interest on top of the principle and that "most viewers would realise that commercial services are not offered free of charge.'' Further, they argued that anyone taking out a loan with Cash Converters would be made aware of the interest charged given it was spelled out in the paperwork that had to be signed.

However a majority of the ASA board agreed with the complainant - J. Suckling - that the ad was on the balance misleading and had the effect of "deceiving and confusing consumers" and was therefore in violation of the Code of Financial Advertising on two counts.

"Basic Principle 2" of the Code of  Financial Advertising says that financial advertisements should observe a high standard of social responsibility particularly as consumer often rely on such services for their financial security.

"Basic Principle 3" says that "financial advertisements should strictly observe the basic tenets of truth, clarity and should not by implication, omission, ambiguity, small print, exaggerated claim or hyperbole mislead, deceive or confuse, or be likely to mislead, deceive or confuse consumers, abuse their trust, exploit their lack of knowledge or without justifiable reason, play on fear.''

Suckling lodged the complaint on the grounds that there was no mention of interest charged over the period you have to use the loan in the commercial thus leaving the viewer with the impression that Cash Converters loaned cash at no gain.

The Commercial Approvals Bureau (CAB), on behalf of the media, dismissed the argument and maintained that commercial "met the high standard of social responsibility required of financial advisers.''

In its submission to the board, the CAB said that it was "reasonable to expect the viewing public to understand that the term "loan typically involves paying the interest and that a loan is only considered to have been repaid once both the principle and interest have been paid.

This basic financial concept is as old as money itself.''

It also echoed the view of the dissenting ASA members that any confusion on the question of interest  would be dispelled when it came time to signing the contact to formalise the arrangement.