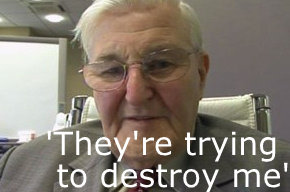 Allan Hubbard has accused the Serious Fraud Office of trying to destroy him.

The Serious Fraud Office (SFO) has announced it has laid 50 charges against South Canterbury Finance President for Life Allan Hubbard that could see him face 10 years in jail.

Hubbard's lawyer has strenuously denied the charges and said the year-long process of investigation breached the octogenarian's rights.

The decision to charge Hubbard but not his wife Jean with serious fraud ends months of uncertainty and will shock many of his supporters in Timaru who believe he is being persecuted in the wake of the collapse of South Canterbury Finance and Hubbard's Aorangi Securities.

“After an exhaustive investigation, we have concluded that there is sufficient evidence to lay fraud charges against Mr Hubbard," SFO Chief Executive Adam Feeley said in a statement.

The SFO said it did not intend to lay charges against Hubbard's wife and fellow Aorangi director Jean Hubbard.

Financial Markets Authority (FMA) Chief Executive Sean Hughes said the FMA had closed its investigation into Hubbard as it was satisfied any SFO action was proporationate.

Feeley said there were aspects of the case which challenged the conventional concepts of serious fraud.

“Whatever the public may think, in considering whether serious fraud has been committed, the motives or lifestyle of an alleged offender are ultimately irrelevant. We have to consider matters such as whether deceit has occurred; the losses caused by that that deceit; and whether the facts meet the prescribed elements of one or more criminal offences," Feeley said.

“Throughout the investigation we have been aware of the level of public interest in, and support for, Mr Hubbard, and the issues of Mr Hubbard’s age and health which have been raised by his lawyers,” he said.

“We are satisfied that, on balance, there is strong public interest in having this matter put before the Court, and any issues regarding fitness to stand trial will be matters for the Court to adjudicate on,” he said.

Mike Heron from Russell McVeagh, who is representing Hubbard, said he had not seen the charges yet, but understood the SFO had not alleged Hubbard had stolen money or benefited personally.

"The charges are strenuously denied by Mr Hubbard. They mark the end of a process which, in our view, has been fundamentally unfair and amounts of a clear breach of Mr Hubbard's rights," said  Heron.

"We intend to file an application to stop the prosecution at the appropriate stage," Heron said in a statement.

Hubbard told the NZ Herald the SFO seemed intent on destroying him and he challenged the decision to pursue him.

"I suppose it is designed to destroy me ... but I see they are abandoning Hotchin now."

Meanwhile, the SFO said it had closed its investigation into Viaduct Capital and Mutual Finance after finding insufficient evidence of fraud, however it said it found some concerning information which it had referred to the FMA.

If this is correct it'd be exactly a year since the Hubbards were placed into statutory management on June 20 last year - http://www.interest.co.nz/news/49847/serious-fraud-office-investigating-...

That'll teach him to take investments from MPs and their families and friends and not treat them better than regular investors.

Ah, some afternoon entertainment. Fun to still have the conspiracy theories around.

Of course, if some journalist had the courage to investigate such claims, we would know whether we should be laughing about them or not.

Alas, it appears that journalists are so unwilling to risk losing access to those who populate the corridors of power, that they prefer to look the other way. (While hoping nobody notices them doing so.)

Anon good nurse, I'll repeat what we've said many times. If you've actually got any evidence for what you allege, by all means share it with us and we'll investigate it.

Um, not to say I agree or disagree either way with the theories, but has any journo ever bothered to ask anyone involved probing question? Like maybe ask Bill English if he or any of his family had money tied up in SCF and if they had any in the other outfits that went belly up but which WEREN'T trashed by the SFO? What gets me is that there was obviously some seriously wrong things happening at those other finance companies but their investors were allowed to be hung out to dry -- but then all of a sudden from out of the blue as soon as John Key took off overseas the govt pounced on SCF even though it hadn't really done anything more than the other companies. In fact it had not even begun to fall apart they way they had.

Until someone starts asking sharp questions and getting good answers that are believable then the conspiracy theories will never go away. Yeah I know, most theories will never go away because people want to beleieve them even when they have been disproved. But right now there does seem to be grounds for suspicions by level headed types, because of the strange circumstances surrounding the whole SCF event.

To me the fact that you are saying you won't investigate until other people find reasons for you to do it sounds very weak and lame Gareth. All that does is fuel the arguments that you don't want to upset anyone who will otherwise do interviews with you. I'm just saying.

Personally I would love to see a bit of corruption in high places over this but unless someone close to the actions squeeks (a la Deep Throat) you have less than no chance of finding out who invested what/where - questions to the pollies would get easily swatted away.

However in the absence of anything other than insinuation one must conclude that Hubbard is no better or worse than any of the other Finance company management, some of whom (despite comment to the contrary) are also facing charges/investigation. Throw the book at Hubbard and as many of the others as possible.........

Out of the blue???!!!! Reserve Bank records show government bodies were discussing the possibility of South Canterbury Finance being placed in statutory management at least as early as October 2009, more than eight months before Hubbard actually was placed into statutory management.

Why SCF? Because some of its lending behaviour was dubious to say the least ( 4th mortgage on Greymouth property http://www.interest.co.nz/news/51127/scf-lent-4th-mortgages-greymouth-pr... Hyatt Hotel...) and it was among the very biggest of the finance companies, closely intertwined with much of the South Island, in particular's, economy.

There was this on English's apparent ministerial conflcit - http://www.interest.co.nz/news/53052/treasury-dumps-more-documents-south...

Journalists ask questions based on leads or information they hear or discover. I haven't heard or discovered anything in relation to Hubbard or SCF conspiracy thoeries to date worthy of being taken seriously enough to take further. But, once again, if you ACTUALLY know anything, please let us know.

Three wise monkeys
Hear no evil, see no evil, speak no evil.
The investigative trail begins the day Alan Bollard extended the Government Guarantee to Finance Companies. It was an act unique to NZ. No other country in the world did it. Someone with power and influence picked up the phone and spoke to Bollard and Clarke. One of the largest Finance companies was SCF. This matter has been canvassed several times on this site. Bernard Hickey put the question directly to Bollard who evaded the question. And has never pursued it. One would have thought that was enough to get the the investigative media into action. Silence. One can only conclude the word went out - leave it alone.

As far as I'm aware, no one has told us to leave anything alone Iconoclast. Without saying it was the right or wrong thing to do, can you imagine what would have happened to the finance companies if they hadn't got the guarantee in Oct 08 and banks & others had?

And why shouldn't they have been allowed to die? The people who put their money into those companies did so for financial gain. It wasn't out of the goodness of their hearts. They were promised big rates of return. Now we're bailing them out.

Oh yes, that's right, this is the country where noone is responsible for their own actions. Personal responsibility is a myth.

We should have let them go and endured the pain. It would all be well behind us by now. Some investor-gambler types would have lost their nesteggs but that's the price you pay in a capitalist society. Well obviously I am wrong, you never pay the price you reap the rewards courtesy of the taxpayers.

And wrt the conspiracy theories, I say 'where there is smoke there is fire'. Someone should definitely be holding Bollard's feet to the fire --- and the feet of every one else involved too for that matter, including govt. MPs!

Years ago I watched that Nixon movie 'All the President's Men'. What a shame there are no reporters in NZ who aren't afraid of their own shadows don't put their self interest ahead of their integrity.

Well, Alen if you actually have some information with the potential to amount to more than libelous innuendo with no actual facts to back it up and want to play Deep Throat, let us know.

Hubbard told the Herald at lunchtime that he was briefed earlier today on the pending charges.

And he challenged the SFO's decision to pursue him.

"I suppose it is designed to destroy me ... but I see they are abandoning Hotchin now."

About time - lets hope they throw the book at him. There will be no more whining from the Hubbadites now about 'nothing to answer for' etc.

Where are the official charges Mr Feeley?

If Hubbard is found guilty it will destroy my judgment of human beings.

I have had business dealings with Hubbard and have found his behaviour to be scrupulous in the extreme.

It is necessary that now the charges have been laid that my judgment of the man be proved wrong.  For if the charges are frivolous then the Serious Fraud Office will prove that it is a monumental waste of taxpayers' funds.

well its certainly a curly one.......hubbard sure looks to have been creative in interpreting the law, but to me it just seems to have been a big money-go-round with perhaps some genuinely benevolent motives. Compare him to petratovich/watson/hotchins and those other bugger with the big houses and i know who i'd rather send to jail....

rules is rules though

The National Party of Socialists

Why did National go ahead and socialise the looses of private individuals and corporates who invested in SCF. Where is the free market when you need one. I think their excuse is to blame Labour. Which they can of course as it started with them , but you would have to wonder why National kept it going and created a far more serious problem for us all  in the end.

Appears SCF from McLeod onwards is where problem began.

Appears Mr Hubbard was the sticking point for Heartland Bank. Now they've got him out. Was there insider trading going on?

Too many unanswered questions.

Who's behind original complaint laid against Aorangi???