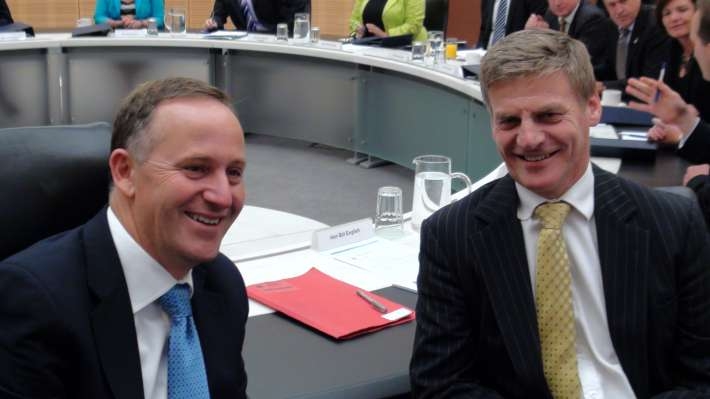 Speaking on National Radio's Morning Report programme, Key said the first share sales should not be earlier than the latter part of 2012.

National is proposing to sell up to 49% stakes in SOEs Mighty River Power, Genesis Energy, Solid Energy and Meridian Energy. It is also proposing to sell down its 74% stake in Air New Zealand to no lower than 51%. The sale process is expected to take place over three to five years, and raise NZ$5-7 billion, which would be used to pay for new capital spending, like school upgrades and construction, over the next five budgets.

Speaking on Newstalk ZB this morning, Key said there was more work to be done on Solid Energy before shares were sold off. Meridian had just got a new chief executive, and markets might prefer a little more time before shares in that company were sold off, he said.

'Lower price than we could get'

Meanwhile Key acknowledged the government might get a lower price for the shares due to the mixed-ownership approach to the sell down, and because New Zealand investors would be front of the queue.

Budget advice from Treasury to the government released earlier this year included comments that foreign investors would play an important role in the sell downs, as they would put upward pressure on the share prices.

“New Zealanders will be at the front of the queue for any offers arising from the extension of the Mixed Ownership Model,  but overseas investors have an important part to play in providing pricing tension to support the Government’s fiscal objectives,” it says in the Treasury advice.

In August, the government said it expected 85-90% of shares in the companies would be in New Zealand hands, including the government's 51% stake. That means 20-30% of the shares sold by the government could end up in foreign hands. The government is also considering setting a 10% ownership cap for any owners other than itself.

“We acknowledge we’ll get a lower price than we otherwise would do, because we’re keeping majority control and we’re building the book, or the allocation of those shares, favouring New Zealanders," Key said on Newstalk ZB Monday morning.

"If you just wanted to get the maximum price, you’d sell the lot and you wouldn’t care who you sold it to. But as we laboriously went through on the campaign, price is one issue, but it’s not an overarching objective. The main objective is to make sure we follow through on the commitments we set on the campaign trail,” he said.

This table is from the Treasury Budget advice to Ministers released earlier this year:

I am going to buy some SOE shares. After all, Labour are saying how wonderful these companies are and are bringing in great returns that I would like to own a bit more personally as well as spread the risk by having the govt still own 51%. A win-win as far as I can see.

I bet a lot of Kiwisaver companies will be doing the same as well.

Also, these companies own assets, not like finance companies who own over valued assets that came tumbling down.

Yep, too bad you already owned them, and now have to hand over cash to retain your ownership.  Plus a yearly repayment to make up the sortfall in revenue the government creats by selling a cashflow positive asset.

At least Best Satus will personally  get the divident stream from the shares, unlike at present.  It will enable those who like to take some personal responsibility to broaden their investment basis.

You are wrong - those money are going into school, hospitals, police etc....so personal in this case means stealing form us all.

The question I would asking is how any years or months it will be before the govt tells the country that is fact they will have to sell off the other half because of the pending ratings downgrade we are going to get.

We are being lead into receivership, that is what the reality is here...

The irony is that selling assets reduces your credit rating.  Simple as that.

Key knows exactly where this is going, he is totally understanding of the route he is taking his own country down!

And he's had his future planned out for a while, which is stay in parliament long enough to:

5) Retire to his private island and phone in his directorship duties once a year,

6) Sit on the beach, sipping something nice, while smirking at the thought of the suckers he left behind who paid for it all.

7) Receive his knighthood, alongside John Banks, Bill English, Paul Holmes and Paul Henry. It's the least a grateful nation can do for such outstanding people.

John Key on having a Plan, failing to close the gap with aussie, immigration, keeping the best and brightest in NZ, and 100% pure.

And having to listen to people wax on about what a nice man JK is, he is "self made successful, and gives his salary to charity, oh and he is doing such a great job. Much better than the 9 years Labour had"

I have been trying to work what it is they think deep inside...is it

2: The need to feel secure inside by using denial

3: The desire to feel they are part of the "winning" team

Absolutely spot on!! Except for one point - why do you think JK would think about us at all??

I also think JK would be planning to put his money into these assets as #1, he's got millions and as far as I can tell no brain. These assets are a no brainer.

You're correct. There's NO WAY this is going to stop at partial sales. Even that should be considered to be economic terrorism, but full asset sales is nothing short of treason.

What a shame ONE MILLION PEOPLE DIDN'T BOTHER TO VOTE on Saturday.

What a shame 2million people can't see that it makes no difference who the govt is at the controls, the result will always be the same....just the time scales may alter slightly!

Effectivley buying the bad assets SCF, AMI etc, and selling the good ones.  Going long financials, and short energy, is exactly the opposite stratagy I would advise if I was "investing" in shares, in this environment.  Be interesting to hear what way the "experts" are going.

Malarkey, I guess It's a bit late now - you have to accept the outcome and suck it up for the next 3 years...  or join the the rest to have Julia as your PM..

On the bright side: every time John Key smirks at the world, Winston Peters will be smirking right back at him.

I think having a majority he, JK can give Winnie the old one finger salute now and then..  Ron Mark, ex  NZ First did it before.

More like WP will be a thorn in his side for the next 3 bloody years. That oily guy will try to pull the rug out from underneath him every chance he gets.

Having a scientist as chief advisor, might be able to whip up some sort of contagious diseases.. Been done before in the old  Eastern block...

Would you trust a politician with it? The only ones left alive will be in the cabinet.

A good idea would be for Labour or the Greens or NZ First or the Maori Party or Mana to announce that upon becoming the government  any shares sold in these SOEs will be compulsorily re-purchased for the same price as was originally received for them.

Even better would be recombining Mighty River Power, Genesis, and Meridian into one SOE with instructions that their priorities in order were something like: security of supply, environmental efficiency of generation/low carbon energy, and price.

I had this idea too, threaten to seize all state assets sold by the previous (National) government if elected. Problem is John Key is already one step ahead - why do you think he is giving investment preference to New Zealanders - they are voters! Anyone that owns shares in these companies won't ever vote for a party that would devalue their shares.

Yeah but the flaw in John Key's cunning plan to ensnare New Zealanders into buyoing these shares is that at the same time he is getting wages reduced in real terms so there are less New Zealanders who could buy shares so more voters who would be happy to support getting our assets back.

Man lefties foam at the mouth over this.

re what do you right thinkers not get?

Our power companies supply power to who exactly?  Zimbabwe? Russia?  Ahh no.

But I'm going to assume that agrument is too obtuse for you.

However....Air NZ cant survive oil above $120USD a barrel, maybe not even $100USD, Statoil can.....until its reserves are empty. AirNZ uill be bankrupt and history in at most 10 years, maybe even 5 at least as the scale of operations it is today.  So say 10 aircraft max for senior Govn officals and very rich ppl.......running on NZ grown jetfuel....

40 years ago people were probably saying airlines couldn't survive with oil over $40USD a barrel. Your $100 or $120 numbers are just that, numbers. $100 today isn't going to necessarily be equivalnt to $100 in 5 years time or 10 years time.

Anyway, I'll keep believing there is a future in air transport as long as they keep building planes. When they stop building planes then I might start thinking otherwise. Not to say that I'd be buying shares in Air N.Z. though.