New study finds most kiwi families have a high standard of living with inequality falling, contrary to what GDP statistics tell us, but housing is putting us under pressure

New study finds most kiwi families have a high standard of living with inequality falling, contrary to what GDP statistics tell us, but housing is putting us under pressure
27th Jul 15, 5:02am by Guest 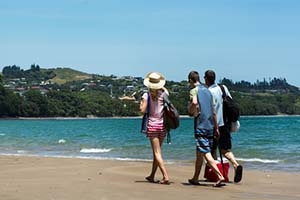 A new measure of material wellbeing shows that New Zealand households have the third highest material living standard in the world for households with a teenager.

Researchers at Motu Economic and Public Policy Research found that, using a new measure for wellbeing, New Zealand ranks just behind the United States and Canada, and ahead of Australia and all the Scandinavian countries. Motu is a not-for-profit, non-partisan research institute and received funding for this work from the Marsden Fund of the Royal Society of New Zealand.

“Our new measure focuses on actual consumption of households, which is a better measure of living standards than income. What we found is that we have very high material wellbeing levels. I think this should call into question the widespread negative impression of living standards in New Zealand compared with other developed countries,” said Arthur Grimes, Senior Fellow at Motu.

The researchers used information from the OECD’s Programme for International Student Assessment to compile their results. These studies look at student performance, but also record their household’s consumer goods (such as books, internet connections, white-ware and cars) and housing configuration (number of bedrooms and bathrooms in a house). This gave Motu researchers Arthur Grimes and Sean Hyland a dataset of household possessions for almost 800,000 households over 40 countries, including all OECD countries.

“Our results show New Zealand is still a great place to bring up children, at least in material terms. Not only do we have wonderful natural amenities, but contrary to what GDP statistics tell us, most kiwi families have a high standard of material wellbeing relative to our international peers,” said Dr Grimes.

“New Zealand’s high level of average material wellbeing – which was observed also in 2000 and 2009 – in part reflects our higher level of cars and bathrooms per household. The results do, however, show a lower level of bedrooms and study places per household in New Zealand. This might suggest that New Zealand’s material welfare is in jeopardy if further reductions in housing amenities per capita occur due to pressures in the Auckland housing market,” said Dr Grimes.

The study also looked at the degree of inequality in household material wellbeing, which fell in most countries, including New Zealand, over the period 2000-2012.

New Zealand enjoyed a substantial reduction in inequality between 2000 and 2009, but experienced a very slight rise following the global financial crisis. In 2012, New Zealand ranked twentieth of forty countries in terms of inequality, with levels similar to those in the USA, Canada and Great Britain.

“For various technical reasons, our measure is likely to understate the material wellbeing of particularly wealthy households. However, most public policy concern is with the living standards of ordinary people, especially those closer to the bottom of the wealth distribution curve, whose living standards are well captured in our data,” said Dr Grimes.

“If we look across the Tasman, Australia’s households are not quite as wealthy as their New Zealand counterparts but inequality in Australia is lower than that in New Zealand” said Dr Grimes.

“Overall, these figures suggest we may need to reassess how we look at this country’s economic performance,” said Dr Grimes.

The Motu Note: The Material Wellbeing of New Zealand Households contains the information discussed in this media release. This, and the related working paper A New Cross-Country Measure of Material Wellbeing and Inequality: Methodology, Construction and Results by Motu researchers Arthur Grimes and Sean Hyland, were made possible by a grant from the Marsden Fund of the Royal Society of New Zealand.

Where did this prosperity come from? And what historic values of NZers underpin our wellbeing?
Do we somehow think it all came about by purely economic activity?

Will household wellbeing and prosperity be upheld and enhanced by allowing foreign ownership of NZ farms and houses?

It's imported in the shape of immigration who are generally fairly well off, thereby lifting the average, while leaving the people at the bottom exactly the same.

We only get better and better ra ra ra!

Up the road in Queenstown, nature is in full flight. Queenstown advertises itself as "The Adventure Capital of the World," where you can bungy jump, heli-ski, jet-boat, or sky-dive. The confines of the modest town can no longer accommodate the throng of thrill-seekers. Soaring mountains still fringe the lake, but condos are creeping along the shore, a snake of traffic clogs the road into town, and Louis Vuitton has set up shop along with Global Culture, a clothes store. If your idea of a holiday is a seething mass of cars and people, topped off by a cacophony of helicopters, Queenstown may be for you. Otherwise, it serves only as a warning of the perils of overdevelopment.

having more cars per household means more material wellbeing..
or a poor public transport and a model of cities/towns where not having a car means total isolation.

So they take an indicator of poverty: car ownership due to inferior public transport option, and turn it into a positive! I bet all those "poor" students in London just wish they were forced into purchasing and maintaining a car to get around.

And we have a Third World vehicle fleet too. Its cheap, but certainly there are costs to it.

'Households with a teenager'. Just took a look at the original, which specified households including a 15-year-old. Which in the case of NZ includes the people who are getting substantial WFF benefits, and effectively excludes the under-35s and the over-60s households. It's looking at a very narrow demographic band.

Car ownership may be a partial proxy for urbanisation - going to be lower in highly urbanised societies where there's good public transport and/or walking distance amenities.

Yes Housing puts NZ ( Auckland ) under pressure
They forgot to mention Transport ( Public ) Its crap compared to other cities of the world.
However - NZ is still and has absolutely the best places to live with equality of oppurtunity (everyone gets the same chance to have a go ) and recreation at our finger tips compared to some of the crap out there in this world.

This study is not peer reviewed - it is a think piece - that measures how much "stuff" a15 year old child has in their lives. It does not take into account so many things eg whether or not a family flies overseas many times each year, whether they have a 1994 Toyota estima or a 2014 Land Cruiser. Most importantly it does not take into account how much DEBT each family has. It introduces a classic term: "Lifecycle smoothing" - not quite sure what that is about. 8/10 for trying and self promotion.

I'm appalled something like this can be published. Not a mention of debt?????? Rubbish

Standard of living should be about experiences and knowledge..........if people can afford to take their kids out and do things, go places etc then those people obtain more knowledge.......knowledge raises living standards.......experiences build new skills, provide a wider perspective, gives new opportunities etc......

Material goods are not a replacement for experience and knowledge!!