Bringing low skilled workers into employment has kept NZ's productivity growth lower than it could have been says Motu. But it improves wellbeing and is a benefit of New Zealand’s relatively flexible labour market

Bringing low skilled workers into employment has kept NZ's productivity growth lower than it could have been says Motu. But it improves wellbeing and is a benefit of New Zealand’s relatively flexible labour market
3rd Nov 15, 8:54am
by Guest 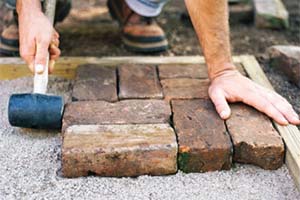 New Zealand’s strong employment growth between 2001 and 2012 drew in a disproportionate number of lower skilled workers.

This change offset the growth in skill of the New Zealand work force by 1.8%.

“The overall change in the skill of New Zealand workers reflects two opposing forces. An increase in average skill due to ageing and rising qualifications was diluted by increased employment of workers with lower skill,” said David Maré.

This dilution was particularly pronounced in the business cycle upswing that preceded the Global Financial Crisis, and was reversed temporarily when employment declined between 2008 and 2010.

Dr Maré is a Senior Fellow at Motu Economic and Public Policy Research - a not-for-profit, non-partisan research institute - and is the lead author on recently released research into firm productivity and skill.

Employment increased by 372,000 workers between 2001 and 2012, leading to a 15% increase in full-time equivalent employment. Adjusting for the dilution in skill, there was a 13.3% increase in “effective employment”. When used for calculating productivity, the adjustment implies that output growth has been achieved with lower growth in labour, and raising measured productivity growth.

Skill dilution and the employment rate 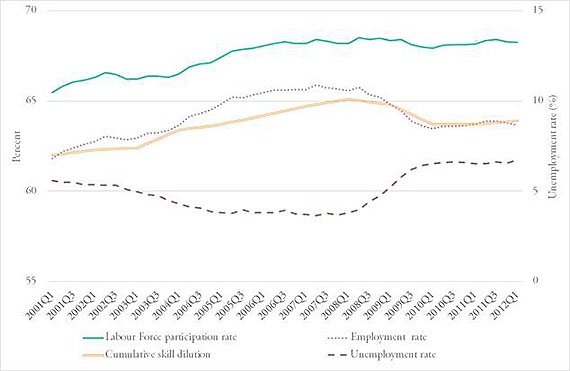 “Getting low-skilled workers into jobs is clearly a positive outcome. The associated skill dilution, however, helps to some degree in explaining New Zealand’s generally low measure of productivity growth,” said Dr Maré.

Specifically, multifactor productivity growth adjusted for changes in worker quality increased by an average of 0.24% per year compared to 0.14% per year for the unadjusted measure – a difference of 1.1% over the 11 years studied.

Productivity estimates are typically based on the quantity of labour used by firms to produce output. However, the characteristics of a firm’s workers also have an important influence on productivity, with different types of labour effecting technology adoption and firm performance more generally. The productivity measure used in the study is ‘multi-factor productivity’. This reflects the amount a firm produces, relative to all of the inputs, including labour, used in production.

The authors constructed a measure of the quality of a firm’s labour force and measured its impact on productivity by examining data about individual workers linked to data on firms in the Longitudinal Business Database.

The share of tertiary qualified workers grew from 15% to 25% between 2001 and 2013, while the share of workers with no qualifications fell from 19% to 14%, according to Census data.

The measure of worker quality – which is derived from earnings data – reflects the bundle of skills, qualifications and experience of individual workers. As such, it picks up a broader range of worker attributes than qualifications alone.

“New Zealand has a poor productivity track record and lifting productivity is a key economic challenge,” said Dr Maré. “We hope that the findings in this paper and other papers that will come out of the Productivity Hub prove useful in helping us understand the nature of the challenge, and developing policies that support growth in productivity for New Zealand firms.”

Motu Economic and Public Policy Research is an independent research institute operating as a charitable trust. It is the top-ranked economics organisation in New Zealand and in the top ten global economic think tanks, according to the Research Papers in Economics (RePEc) website, which ranks all economists and economic research organisations in the world based on the quantity and quality of their research publications.

Or in another words, although regarded as 'skilled workers', most uni graduates (with BA degrees) are taking on low paid jobs because they cannot offer any specific skills.