A rebound in US jobs growth cools talk of a US economic slowdown, raises talk of more Fed hikes in 2016. Wage growth slipped however

A rebound in US jobs growth cools talk of a US economic slowdown, raises talk of more Fed hikes in 2016. Wage growth slipped however 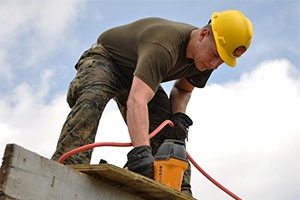 The data underlined the strength of the American economy and adds weight to the US Fed's plans to gradually raise interest rates this year.

Another 30,000 jobs were also added to the previous estimates for December and January.

The unemployment rate was unchanged from January at 4.9% - an eight-year low.

The participation rate also rose to 62.9%, also above analysts expectations.

There was a disappointment however. Wage growth slipped. It was up +2.2% year-on-year when markets were expecting a +2.5% rise.

It is the giant services sector that is generating the jobs growth. Output may be up in the factory sector but employment in it shrank slightly in February.

These strong job gains have some analysts saying Fed hikes are 'in play' for April and June this year.

The news triggered a strongish rise on Wall Street, up +0.3% in most markets.

Bond yields rose more strongly with the UST 10yr yield up to 1.90%.

The USD fell as a 'risk-on' mode grew.

Credit default swap spreads fell fairly sharply, and the Markit investment grade index for US bond issuers fell below the 100 point mark for the first time since mid January. It is now down to 93.84 today, a sharp fall from 110.2 this time last week. Similar falls are occurring in the Euro equivalent. The Australasian index is down to 144.1 (this index includes miners as well as banks and other corporates with investment grade debt on issue). That is a -10% drop in a week.

Another big CDS spread mover is for Australian Government debt. It is at 44.7, an 11% improvement in a week, bolstered by their surprise GDP gains.

The NZD is benefiting from the 'risk-on' mood. It is up to over 68 USc for the first time in two months.

A big jobs jump
Yes.
Over 80% Of Jobs Added In January Were Minimum Wage Earners

'It is the giant services sector that is generating the jobs growth.'

The US service sector produces almost nothing (other than pollution), and is almost totally consumption based. Even the burgeoning 'healthcare' sector is performing exceptionally badly, with US health statistics the worst in the world on a result-per-dollar-spent basis..

American commentators say there have never been more burger-flippers,, bar-tenders, waitresses and part-time cleaners. On the other hand, there have never been fewer farmers and craftsman (well, not in the past 150 years). In fact, the US has been on a serious down slope for many years, and is digging an ever-deeper hole as time passes.

However, we recognise it is all political, as the Zero Hedge item below points out.

It's much the same in NZ, of course, with total debt at a record high and rising fast, practically all policy directed towards creating ever-greater unsustainability, and several prime industries in deep poo,, but the government declaring a 'surplus'.

I think the service sector includes doctors, accountants and ministers of religion, along with burger flippers.
Its a nearly useless catagory , like GDP is a a nearly useless measure of activity.

Looking for signs that four QE’s actually provided enough economic boost comes up empty in wages and earnings (and so everything thereafter, too; wages to inflation to recovery). To expect otherwise is to deny reality, since robust wages and employment don’t ever accompany a manufacturing recession and relatively heightened economic uncertainty. A dearth of actual wage growth, however, is perfectly consistent with the overall economic picture that still shows such a massive proportion left on the outside; which can only suggest huge and unresolved economic imbalance. Read more

Positivelywallstreet interested in your reasons why GDP useless measure of activity?

Thank you, that makes me think...
From the Boston Fed
Pollution — “The GDP often counts pollution as a double gain; once when it’s created, and then again when it is cleaned up. By contrast, the GPI subtracts the costs of air and water pollution as measured by actual damage to human health and the environment.”