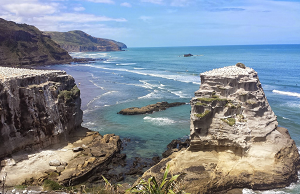 The group of business and community leaders Auckland Mayor Len Brown has commissioned to do a study on the Ports of Auckland is mulling the possibility of the port being moved to Muriwai.

The Port Future Study’s consultants are suggesting the exposed beach, 40km northwest of Auckland, be considered as a potential site for the port to be relocated to.

The consortium of consultants, led by EY, is also weighing up the viability of relocating the port to the Manukau Harbour or the Firth of Thames, as well as keeping it where it is, and either constraining its current footprint or enabling it to grow.

Muriwai is isolated from any major infrastructure. It borders the Waitakere Ranges and is part of a regional park home to a large colony of gannets. The Manukau Harbour is New Zealand's second largest natural harbour, located to the southwest of the Auckland isthmus. The Firth of Thames is a large bay at the southern end of the Hauraki Gulf, southeast of Auckland. It occupies a rift valley between the Coromandel Peninsula and Hunua Ranges.

Mayor Brown established the Port Future Study in April last year to provide recommendations to Auckland Council on a strategy to accommodate Auckland’s long term future trade and cruise activities across the next 50+ years.

Once the consultants have finished their technical cost-benefit analysis of the different options on the table, and members of the study’s larger Reference Group have provided their feedback, the study’s Consensus Working Group (CWG) will formulate recommendations to make to the Council.

The CWG consists of 16 members including iwi leaders and representatives from stakeholder organisations such as the Chamber of Commerce, Port of Auckland, the Employers and Manufacturers Association and the International Container Lines Committee.

The chair of the study’s Working and Reference groups Rick Boven says, "Once we complete further analysis on the shortlist of options we will have a clearer picture of how each option stacks up on costs and wider economic effects. Some options are likely to be cost prohibitive.

“Auckland is on a steep growth trajectory. With an expected population of at least 2.6 million and potentially quadrupling of freight trade in the next 50 years, Auckland will need a strategy to ensure freight can flow for continued trade and prosperity.”

The study will be completed by the end of June 2016.

Extremely bad idea, since Muriwai is a natural beauty spot boarding the Waitakere Ranges with gannets colony's and blue penguins, it attracts lots of tourists each year. To put a port there would be madness.

Manukau Harbour is also part of the Waitakere Ranges, so again would put the reserves beaches and natural habitat at risk. Oh and lets not forget our very rare Māui dolphin where there are only 55 left and part of their surviving habitat is Manukau Harbour!!! So lets strike this option form the list.

Firth of Thames would probably be a better plan and would help to further build local infrastructure. Though need to check and lessen the impact on the environment.

Doesn't take long for some wowsers to sharpen their pencils (or bash their keyboard).
The plight of the Maui Dolphin is obviously serious, however it's now used in such unnecessarily emotive circumstances that it borders on the ridiculous - It's raised to block almost any development on the Western seaboard, from Taranaki all the way to the Kaipara.
Let's have some modicum of perspective on this - It's not like we're talking about Singapore or Hong Kong traffic volumes.

Whilst I agree that Muriwai does seem like a very strange option to suggest, surely there are some areas of the Manukau Harbour that would be suitable; i.e. not infringe upon reserve areas and perfectly suitable for a Port (although I'm not sure how deep / tidal it is).

In any case, it would be great for Auckland to reclaim the current Port as a public space like Wellington.

you might want to look up about the manukau bar before you reckon that modern contianer ships could get over it. as well as the depth in the internal harbour.
the dredging and ongoing dredging makes the manukau harbour a poor option

Yeah as I said, I'm not sure how deep / tidal it is - those are practical considerations that I would like to know more about / how the council has objectively evaluated and come to these conclusions.

The OP just completely ruled out Manukau Harbour on the basis of emotive claptrap.

its nonsense in short, whoever is in charge of this process has picked places that are not practicable, expensive to try to make at least useable.
it all points to a snowjob to leave ports of auckland where it is and even expand on its current site.

All terrible ideas, makes me who who looked into it and what there objective was.
a the dredging needed for all three would be costly and ongoing
b the cost to install the infrastructure needed would run into billions.
I suspect this whole exercise is to justify the current port and planning.
why else would you not look at marsden point and set up a port of Tauranga type of operation

And the cruise ships will come in over the Manukau bar and tie up at Onehunga wharf, because that is close to the airport. :)

Why not do rail to Marsden via a train depot in east Tamiki etc.... turn the current wharf into a stadium and keep existing cruise ship docks.... would need a rail upgrade but on a long term basis its got to be worth it?

ports of Auckland already have a depot serviced by rail at wiri to service the south. they could also set one up out west/shore.
the cost of expanding marsden, the new rail and expanding motorways would be far far cheaper than any of the other three options.
this is a snowjob to expand the port where it is

"...the cost to install the infrastructure needed would run into billions..."
The land at Ports of Auckland would be worth billions if you sold / leased it.

did this come out on April 1st? Muriwai has no natural harbour, no rail link and no major road link.

Hmmm I am not a conspiracy theorist but I am suspicious about this rumour. 'Let's get the whole of Auckland riled about this one then announce the plans for expanding the Auckland Port' or some other idea. I dont think Muriwai residents need worry. We won't let that one happen.

Typical red herring tactics - come up with a really dumb idea - waste ratepayer money on it - conclude the port should stay in Auckland - there's a surprise.

On the subject Whangarei Marsden Point - funny that Auckland and Tauranga Port cos are both shareholders - making sure that Marsden point does not get uppity.

Lots of factors stack up about Muriwai. It will be good to see the analysis.

'....Auckland’s long term future trade and cruise activities across the next 50+ years'

There is no 'the next 50+ years' for low-lying industrial cities like Auckland.

Indeed, unless the current insanity of squandering fossil fuels does not cease very soon there won't be 50 years for any humans.

Despite the dwindling supply, I see no indication of the insanity of mass burning fossil fuels ceasing soon.

I think cruise ships entering through the Manukau Heads will provide lots of opportunities for 'adventure tourism' as well as a choice bonanza for beach-combers. A win-win situation.

You can imagine the breakwater required. See New Plymouth harbour and imagine it x 50. Imo a waste of rate payers dollers.

Surely Whangarei and and inland port set up around the end of the Nortwestern MW somewhere is the option. Whangarei is massive natural deep water port, with lots of flat vacant land. This would be similar to what Port Tauranga and Penrose inland port have done. Better do it quick before Port of Tauranga do it and get Port Auckland in a pincer attack. Yes Marsden pt has no rail, but thats all it needs. Murawai needs earthworks, rail, and massive capital works to build a harbour.

Move the Auckland Container/Car business to Marsden Point.
Move the Navy up there as well.
It makes sense, probably will never happen. New Zealand has become incapable of doing what needs to be done on so many issues.
The Clark/Key government we have had for over 15 years has left us in 'do nothing' state of blindness.

He is really on the money

Better idea...stop importing..problems...and giving idiots any port in a Storm.

We do not need expansionist ideas, we need to consolidate, so we do not ruin this Country any more. As for Awkland...bypass it...It ain't worth having.

Also, A few lessover paid idiots in power to dream up wacky ideas would help a lot ...too.

Actually a logical process. As the city has grown and there have been competing pressures on the area I would have expected this process, and to not consider the west coast, no matter how illogical it seems would be foolish. For my money - keep the cruise ship terminals at the foot of queen street as they are, move the freight terminals to Marsden point, as some have already mentioned. Bottom line act or lose out to Tauranga.