PM English bats away questions on what the govt might do with surplus cash; Tax cuts are just one of the choices it has; Infrastructure, population growth and debt pressures still have front seats

PM English bats away questions on what the govt might do with surplus cash; Tax cuts are just one of the choices it has; Infrastructure, population growth and debt pressures still have front seats 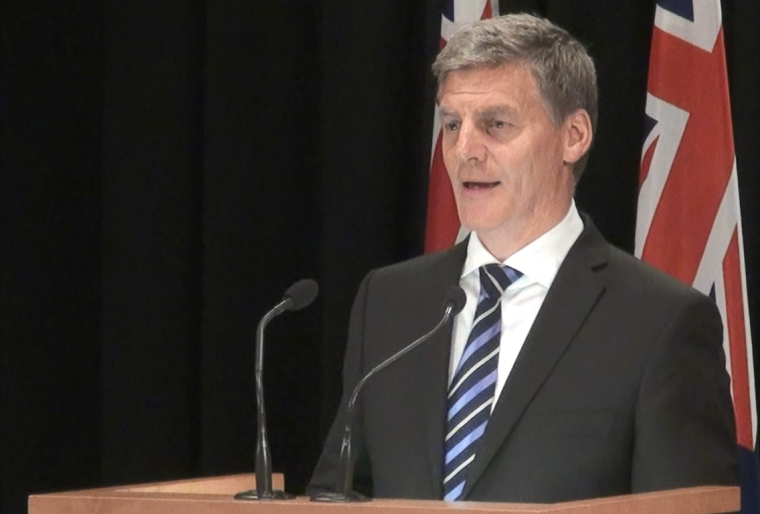 The Budget must be approaching.

Prime Minister Bill English was peppered with questions at his weekly post-Cabinet press conference Monday on how the Government will use its expected surpluses this year. Tax cuts, Working for Families, student loan repayment thresholds, the Accommodation Supplement and earthquake costs were all in the mix – well, the mix of questions thrown at him by the media.

Not wanting to get ahead of the Budget process, English knocked every suggestion back with a straight bat, wheeling out the now-familiar saying that the Government would first need to prioritise infrastructure investment requirements, pressures from population growth on public services, and of course a desire to pay back its own debt.

The beginning of March was just too early to be talking about where surplus money could go. Treasury hadn’t even finished its latest forecasting round for how it expects the economy to behave over the next few years.

“We’re some way away from that sort of detail,” English replied when asked whether a renewed Working for Families (WFF) package could be in the wings.

The PM had hinted over the weekend that the Government might need to invest in updating the IRD’s infrastructure (again) before it would be able to roll out WFF changes. English wouldn’t even be drawn on which parts of the policy could be fixed if the IT systems were perfect.

But he did offer up that the administrative system meant there was a hefty lag between families deciding “what they do and what the consequences are” – ie it takes a long time to sort things out.

IRD had only just managed to deal with the GST increase and its next focus was the provisional tax system. After that, social policy could be in focus. “So that’s a wee way off,” he said.

On tax settings, English said this was just one of the choices in front of the government as it weighed up what to do with surplus cash. While his predecessor John Key said the government decided not to give tax cuts in recent years because it only had $1 billion available rather than his preferred $3 billion, English said the current Cabinet does not have a particular number like that floating around – at this stage.

Managing surpluses can be harder than managing deficits, English said. “Because with deficits you just say 'no'... with surpluses you’ve got choices.”

Could the Government raise the $19,000 wage threshold where student loan repayments kick in? “We’re reasonably happy with it.”

There was one thing he did want out there: The government does want to support low and middle income families and make sure “all New Zealanders benefit from a growing economy.”

Everyone’s circumstances were different, meaning they would be affected by different policies. Some were affected mostly by housing costs, some by WFF, some because they’ve had a pay rise and found themselves in a different tax bracket.

“But this is what happens when you get surpluses. You get people lining up with their best suggestion of how to use it, in a way that might work for them. We understand that, that’s part of people wanting to see the benefits of a growing economy,” English said.

Also, if he was warning us about those cost pressures like infrastructure requirements and from population growth, if these are higher than expected (and throw those un-booked quake costs in there too), would the government look to cut WFF and other policies tugging on the purse strings?

It must be an election year as well.

increasing the Accommodation Supplement will lead to rents increasing, have they never learned subsidies increase prices

But it's a cash handout to their investor-voters. They know exactly who they're giving money to.

That's very true, but you have to consider that the majority of National MP's own multiple rental properties and therefore profit nicely from this at the same time as appearing to the public that they are helping ordinary Kiwis.

Also why is the Government contemplating spending Kiwi's taxes, that is where Gov't surpluses come from, on population growth? The main factor in population growth is immigration and we are constantly informed that immigrants supposedly help the economy, so why is Gov't spending required for this?

Will $20 a week in tax cuts be enough to save the election for National?
Implemented in August?

Grammar.
Would $15 a week in tax cuts make a difference then?

Not much, it would be better going back to where it has come from; education, health, housing etc. It's been penny pinched from essential services, it can go back.
Who made you grammar police?

Well, it's one and a quarter extra smashed avocados.

Surely the millenials will be placated by that?

Population growth pressures? - change the immigration settings!!!! Auckland gets another Whanganui every year, I heard someone say in another thread - and as Michael Reddell keeps pointing out on his blog - it hasn't improved our productivity one bit over the decades of its operation.

Mmmm. Our 'leaders' are fully indebted to this cheap and nasty, GDP boosting game.
Totally ignore the wider negative effects of it all.
Like a drug addict.
They care very little for the mid to long term effects of their policy.
I wouldn't say Labour are much better.

Yep, mainlining on it

Yep, it's pumping up their personal property portfolios as much as anyone else's.

The addictive population and property ponzi.......

$20 a week would be $1040 in after tax income per year. That would be like a small family holiday for some families, especially if they invested the amount as they got it and only spent it on the holiday at the end of the year!

apart from camping, good luck trying to go on holiday for 1K for mum + dad +2 kids
costs a lot more than that even clipping coupons

The average NZ household is several dollars a week worse off now compared to a year ago. Housing costs is the key factor.
It is the most vulnerable half of society which incurs the most housing costs -paying the highest proportion of their income in rent or mortgage costs..... so there is inequality element to this situation too.
For the average household the benefits and the costs they have received from the economy has not been a 'success'.
This inequality increasing housing situation has been developing for some time -probably as far back as 1991.
This situation indicates a systemic problem in the economy -in particular in the housing market.
Broad economic reforms are necessary.
Hiding behind lies like NZ's housing market is a sign of success or growth or some other BS doesn't help.
http://www.labour.org.nz/rising_housing_costs_swallow_pay_increases

Give me the tax cut, and I will pay down my debt

Election year, national may go for some popular measure as need something to talk about in election to cover the housing crisis, immigration........

The tax cuts may be actually needed for households to pay their increasing mortgage repayments due to increasing interest rates.

Yep tax cuts, that'll sort it Bill. For a few pennys a week I'll forgive you for the housing, immigration and envirnomental carnage your delivering.

Will not be tempted by a shitty tax-return carrot. Time to get some actual, policy reform.

How's that housing crisis treating you?

Vote National and #RentTilYouDie (just getting the message out RickStrauss)