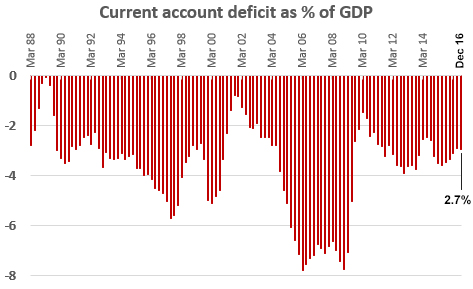 The difference between imports and exports of goods, services and capital was a seasonally adjusted deficit of $1.6 billion. This was $420 million smaller than in the September 2016 quarter, figures showed.

The result indicates the narrowing of the deficit is tracking ahead of the Reserve Bank of New Zealand’s expectations – in its February Monetary Policy Statement, the RBNZ forecast the deficit would fall to 2.7% of GDP in the year to March 2017, although it expects this to blow back out to 3.4% in 2018.

New Zealand’s net liabilities with the rest of the world fell during the quarter. Its net international liabilities stood at $156.5bn at 31 December, down from $166.1bn in September. Importantly, the ratio of net liabilities to GDP was 59.9% (from 64.8%). This was the lowest ratio recorded by Stats NZ since it began tracking the position in June 2000.

The smaller current account deficit in the latest quarter was due to a smaller income deficit, and a larger services surplus. This was slightly offset by an increase in the goods deficit, Stats NZ said.

Some key takeaways were:

New Zealand saw a net outflow of investment of $3.3bn during the quarter, as a $4.7bn increase in assets (outflow) was partly offset by a $1.5bn increase in liabilities (inflow), Stats NZ said.

The key movements driving the outflows were:

“Conceptually, a current account deficit would be funded from an inflow of overseas investment. However, in the latest quarter, the financial account showed a net outflow, resulting in net errors and omissions of $4.9bn,” it said.

One cause of this large net errors and omissions figure was that the banking sector sourced additional funding from within New Zealand in the latest quarter, rather than borrowing money overseas.

“These locally generated funds were used to increase investment in overseas assets (part of the $4.5bn invested in other investment). Since this domestic funding is outside the scope of balance of payment statistics, it does not show as a financial account inflow.”

Excellent. Who would have thought that reining in the banks from borrowing hand over fist from overseas would improve the current account?

One might even speculate that the RBNZ do actually understand what they are doing and they have just been giving us the impression that they don't have a clue in order not to upset their overseas counterparts.

I'm not holding my breath on the capability of RBNZ, although my opinion doesn't diminish this improvement in any way. The reluctance to lend to those in Auckland will no doubt contain the size of mortgages as the price stays flat or falls. The less the banks borrow from overseas the better.

Every dollar borrowed from overseas pushes up the NZD a little bit (eg borrow USD, then sell USD/buy NZD).