Although Australia remains our largest trading partner, trade with China benefits us most driving our improving terms of trade

Although Australia remains our largest trading partner, trade with China benefits us most driving our improving terms of trade

This Special Topic provides an overview of New Zealand’s trade composition and discusses some of the implications for the wider economy.

In the year to March 2017, New Zealand’s total trade flows (the value of goods and services exports plus imports) were valued at $137.8 billion, with just two countries, Australia and China, accounting for more than one-third of total trade. New Zealand’s top five trading destinations accounted for just under two-thirds of total trade (Table 1). Of the $137.8 billion, 51.1% was exported and 48.9% was imported, resulting in a trade surplus of $3.0 billion.

In the year to March 2017, goods accounted for 71.6% of total trade, while services accounted for 28.4%. Goods exports made up 69.2% of total exports while goods imports made up 74.2% of total imports. Goods as a share of total trade has been relatively stable over the past three decades, averaging 73.1%. However, this decreased slightly in recent quarters, as trade in services increased owing largely to a higher share of services exports, reflecting strong tourism.

Services exports are dominated by travel and transportation (63.8% and 12.7% respectively). The former captures spending in New Zealand by short term visitors (mostly holiday makers), the latter includes transportation of passengers, freight and other items though carriers such as ships and aircraft. While travel and transportation dominate imports of services (at 33.8% and 22.5% respectively), other business services – including merchanting (the margin on goods bought and sold offshore) and services, such as legal, accounting and consultancy – accounted for 17.3% of services imports. This compares to 8.8% of exports.

As measured by goods and services two-way trade, Australia is New Zealand’s top trading partner. However, for trade in goods, China is ranked first, leading in both exports and imports. In 2008, New Zealand entered into a free trade agreement with China (the first developed country to do so) which contributed to an increase in the pace of trade expansion with China2 (Figure 1). Since 1990, China’s share of two-way trade in goods has increased from less than 1.5% to over 20% in 2017. Prior to this, Australia was New Zealand’s top trading partner in goods for more than two decades. 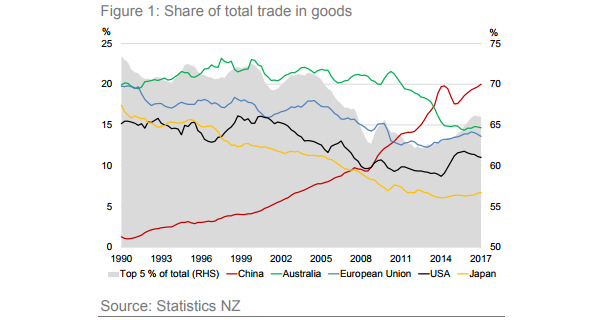 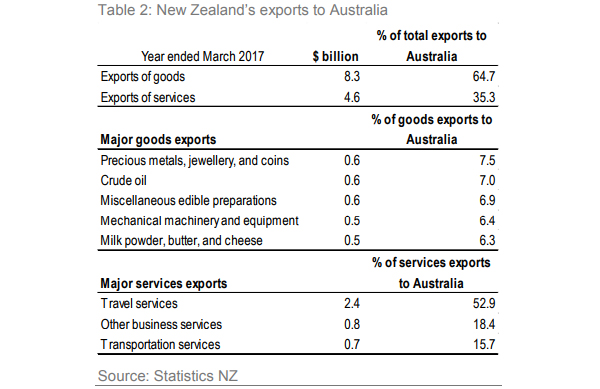 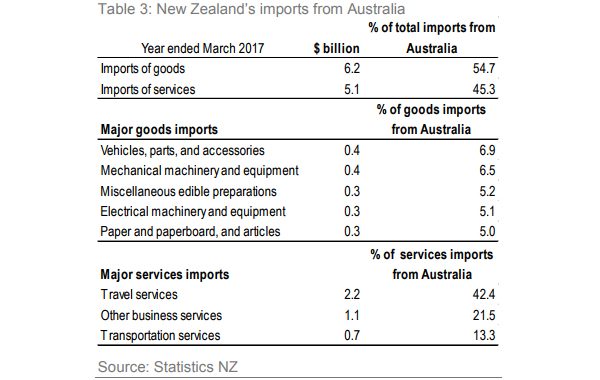 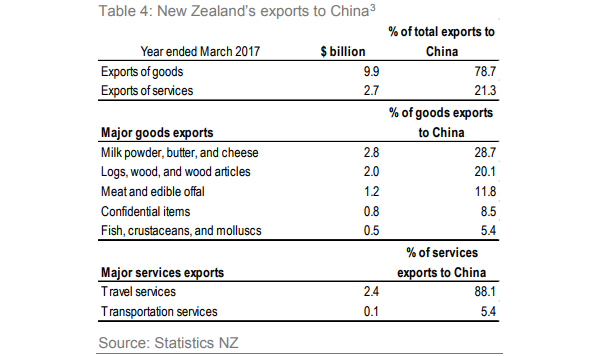 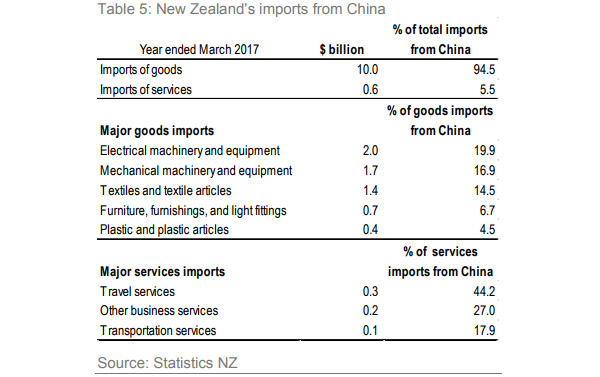 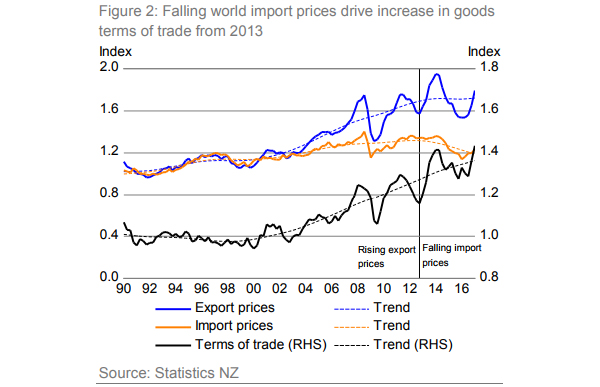 Growth in trade with China has contributed to New Zealand’s improving terms of trade, as Chinese urbanisation and ongoing transition towards consumption-led growth has supported demand for New Zealand’s primary products and kept export prices elevated. On the imports side, China’s ability to produce manufactured products more cheaply than most other countries (due to scale and low labour costs), has kept import price growth muted. However, it is difficult to ascertain the exact “China” impact as other factors, particularly low oil prices, have also kept import prices low. Oil prices declined from over $US100/barrel in mid-2014 to around $US45/barrel currently. This decline followed large-scale investment in shale oil extraction in the US and elsewhere, which increased global supply and reduced prices for oil, and subsequently petrol (New Zealand’s third largest import good) along with goods and services with a significant fuel component.

The impact on economic activity from a rise in the terms of trade will vary depending on the drivers of the shift. For example, whether the price change is concentrated in a particular industry or good, or whether it is broad based across many industries or goods. Higher export prices (as seen in the dairy industry in 2013), would generally lead to higher investment (such as farm conversions) which supports domestic activity. In addition, higher export revenues would increase disposable incomes and support growth in consumption. On balance, this additional demand would contribute to inflationary pressures leading to higher interest rates. Moreover, these effects may be more pronounced when a number of export prices rise simultaneously. The New Zealand dollar (NZD) would likely appreciate reflecting the stronger economic outlook and higher interest rates. New Zealanders who do not derive their income from exports (either directly or indirectly) would benefit from lower domestic prices for imported goods and services. In other words, the higher NZD would distribute some of the income gain from higher export prices to the rest of the economy by increasing the purchasing power of households.

On the other hand, the impact of a rise in the terms of trade owing to lower consumer import prices may be less stimulatory for the economy as a whole. While households would benefit through lower import prices, supporting consumption, the relative price shift could also drive higher imports of consumption goods. In addition, the impact on investment is less clear. In general, investment demand will be influenced by the type of import goods experiencing lower prices. Low goods import prices may increase competition in import-competing sectors and discourage investment. On the other hand falls in the price of imported capital goods may encourage investment. Falling import prices will also contribute directly to lower tradables inflation.

This is a repost of the Special Topic here.