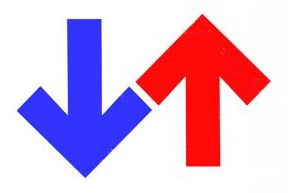 Labour’s prospects of governing after next month’s election have been boosted with Labour’s support up 2% to 32.5% following Jacinda Ardern’s rise to the Labour leadership at the start of August – the highest support for Labour for nearly a year.

However, Greens support is down 4.5% to 9% after the welfare fraud scandal involving Greens co-leader Metiria Turei cost the leader her job a week ago.

Winston Peters appears to be the largest beneficiary of the Greens troubles with New Zealand First increasing their support by 3.5% to 11.5% - now with greater support than the Greens for the first time since the 2005 Election when New Zealand First formed Government in coalition with Labour under former Prime Minister Helen Clark.

New Zealand First is now in prime position to repeat the 2005 Election outcome and install Jacinda Ardern as New Zealand’s youngest Prime Minister since Edward Stafford in 1856 or choose whether current PM Bill English wins an election in his own right for the first time.

Overall support for the governing National-led coalition was down 1% to 44.5% with support for National’s coalition partners down slightly: Maori Party on 1.5% (unchanged), Act NZ on 0.5% (down 0.5%) and United Future on 0%.

Support for the parties currently outside Parliament was unchanged at 2.5% with 2% support for newcomer The Opportunities Party (TOP).

“Competing narratives vie for attention heading into the final few weeks of New Zealand’s extended election campaign with National on 42.5% now just ahead of a potential Labour/Greens coalition on 41.5% and the wildcard New Zealand First on 11.5% support now appearing to hold all the aces.

“Can incumbent Prime Minister Bill English avoid the ignominy of a second election defeat and avenge his 2002 defeat to former Labour Prime Minister Helen Clark by winning an election in his own right for the first time?

“Can new Labour Leader Jacinda Ardern complete a remarkable political rise to the top after winning the Mount Albert by-election less than six months ago and subsequently becoming Labour Leader in March and elevated to the leadership just over a month out from the election by becoming New Zealand’s youngest Prime Minister in over 160 years?

“If Ardern is to achieve this incredible feat, it will likely be with the support of New Zealand’s favourite political maverick Winston Peters and his New Zealand First party who’s recent increases in support make it ever more likely Peters will get to decide who emerges as Prime Minister after next month’s election.”

Electors were asked: “If a New Zealand Election were held today which party would receive your party vote?”

This latest New Zealand Roy Morgan Poll on voting intention was conducted by telephone – both landline and mobile telephone – with a NZ wide cross-section of 873 electors during July 31 – August 13, 2017. Of all electors surveyed 6.5% (down 2%) didn’t name a party. 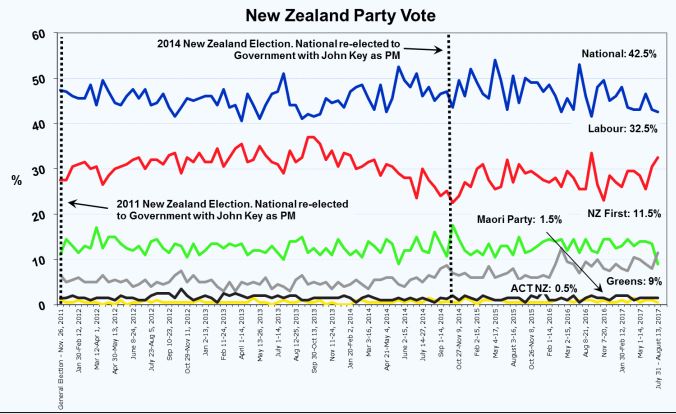 National still in the lead - despite the Jacinda effect........

Remember that a vote for Labour could make Winston Peters the next PM.........

"....or choose whether current PM Bill English wins an election in his own right..."

I think history will show Bill lost the election " in his own right" with his lying and general billshitting over the TB affair.

He just makes normal kiwis feel dirty when they consider him.

BE will lose second time but should be happy that atleast was a prime minister by default for 9 months.

and the other 58% selflessly vote for what's best for the country ahead of themselves ?

PocketAces has always been a great comical value - but he bettered himself here. Sheer brilliance.

That's not true. Winston will come to the table with that proposition for both parties. No majority leader in their right mind would even consider it. Winston will then drop it in return for other concessions, like Foreign Minister and lots of shiny baubles.

Or Winston could simply say to Labour, "Make me PM or have yourselves another 3 years in opposition. Take your pick."

Remember, Winston has had more experience in Government than the entire Labour front bench combined. So the above request would have a certain legitimacy........

14 day poll window up to 13 August, mostly missing end of Turei's ructions with her resignation on the 9th, and not really capturing full effect of Jacinda Arderns assuming Labour leadership on 1st August. Greens have likely fallen and Labour gained during this poll. This poll is less accurate than yesterdays Colmar Brunton which polled Aug12-Aug16.

What you're saying is technically correct, but HIGHLY unlikely. Jacinda as the main party in an MMP government would be very unlikely to give up the PM role. The better response would be that Winnie would be to get 2IC.

But I mean "National still in front" - pretty sure you're a Nat supporter with that sort of bias commentary.

Winnie wouldn't even be 2IZ with national, Jacinda has a nice smile, those unsure will remember that on the day, that lovely trusting smile and her big foot cat

We need to remember that Jacinda has said she didn't want to be PM....... Winston has never wanted anything but to be PM.

Labour also knows that Winston could easily do a deal with National. Winston has been criticised for many things - but rigidity is not one of them........

Nonetheless, National surely would rather have a term in opposition than have Winston as PM. The Nats would only have to wait 3 years (or less) for Labour/Winston to implode and it would be back in power again.

People are clearly intending to vote labour because of her been leader.Seems to indicate they want her as p.m, otherwise they would vote for Winston. ,

could you provide your definition of "in front" ?

He thinks we're still playing "first past the post"

Winston only as much power as Labour and National give him, If his demands are too high , then they may come to an agreement to let one or the other run a minority govt.

Not sure that is all that great for democracy though. It also likely means that no major policies that are needed, such as housing corrections, will get past for the next 3 years.

Maybe, maybe not. Once the election is out of the way , National will simply have to do something about housing. I could see National and Labour coming to agreement on housing.

Winnie doesn't need the title of PM if he went with labour or ever labour and greens, Winnie would crush that new lot in power and he knows it, he'd only be the boy with English and he'd know that too, Pete's would have been rubbing his hands together with the biggest of smiles with the changes in labour and greens , plus he'd be better of pushing his minimum wage, immigration, overseas investors , nz banks to Jacinda with the lovely smile than with my way or the high way smart ass English, peters isn't stupid

Not sure if anyone can predict the "Unpredictable" WP... he has proved time and again that he could twist his rock solid stances when offered a post or another sweetener .. so we have been fooled few times with his Do or Die stances.

It is going to be an interesting election and more so in the next 3 years ... wonder if we are going to witness a clash of ideologies or a clash with the power houses and business drivers ... Both clashes are lose - lose

One can draw few lessons from the USA nowadays, popular Trump was "helped up" to the WH with all his fancy ideas and political inexperience ( with teams of bankers, advisers and round tables to support him) - the mayhem he is in today is hardly enviable some of which caused by the same people who put him up there... Support team members are resigning, his popularity is dropping continuously, and he is changing his staff faster than changing his undies -- chances are that he won't survive his first term and he might eventually fire himself!! ...

Maybe popular votes and some misguided sentiments would lead to win an election , however building and running a stable and productive government is a different issue --- smiles without substance or a strong supporting team are not enough to climb the treacherous mountain of Governance!

No one in any of our party's are anything like trump, Jacinda, Winnie, bill , they no this game inside out, trumps a brainless daddies rich boy dick and shouldn't be compared to us AT ALL, Jacinda with Pete's would do a lot better than the last 9 years of lies and false dreams of high house prices, no , vote for change and Jacinda s smile PS Jacinda would run rings around English and dick head trump, English without key to hold his hand like even before key turned up is nothing, 3 years of English would be a big mistake,

Umm smiles without substance there Eco Bird....all I can think of is smiley wavey Mr Key......

Bye bye nuts... you'll have screwed nz for 9 years
Nz herald article about why the national party might fail....

* Denying the housing crisis for too long

Everyone could see that house prices had reached ridiculous and unaffordable levels in Auckland – except National. It spent too long denying the problem rather than talking about fixing it.

9 years +++. They have also complexity screwed the natural environment. Their taxpayer subsidised handouts to primary industry have yet to play out. The only thing green left will be the stagnant rivers and lakes. Shortest term thinking govt of all time......the foresight of greed only. History will not treat key or his govt well.

This is only the party vote though. If national retains all of it electorates (and act / United retain these) and gets 42.5% of the party vote, National will end up with 59 seats. Maori party could be kingmaker with a single seat.

If they get less than 42% of the party vote, they will need WP (unless the Maori party can win more than 1 seat)

Where are the most marginal electorates?

Somebody needs to tell Helen Clarke to back off a bit. She has had her turn and pushing in to be too supportive may actually end up hurting Jacinda's straight forward, breath of fresh air image. Helen's brand is quite different, people got sick of her and voted her out. Best for every one if she stands back and is only quietly but sincerely supportive.

And that is Wild Bill's Achilles heel ... that he's slow on the uptake ( a mad crazy property bubble in Orc Land , Bill .... no ? ) ... and even slower on the policy front ... a steady as she goes , " farmers are the backbone of our nation " , dull BB ... I wouldn't say that the Gnats are toast in the upcoming election , but they obviously are crackers ...

Gummy they are toast. they have painted themselves into too many corners. Housing, immigration, water tax, big irrigation paid for by taxpayers (on par with Muldoons stupid livestock incentive scheme). And on it goes. To meet the mood they would need to do a 360.....and that wouldn't work either.

I wonder how much rot and corruption (in our current institutions) will be brought to the surface if Winston Peters has more influence in a future government. Is this why certain quarters fear him so much? I very much doubt that he could do as much damage to the peoples of NZ as has happened in the last 9 years.