It's regional development day: What do you think about Peters' call for Ports of Auckland to switch to Northport? Road & Transport's Ken Shirley says it's "Stalinist"; Meanwhile, Simon Bridges takes two hats to Taranaki

It's regional development day: What do you think about Peters' call for Ports of Auckland to switch to Northport? Road & Transport's Ken Shirley says it's "Stalinist"; Meanwhile, Simon Bridges takes two hats to Taranaki 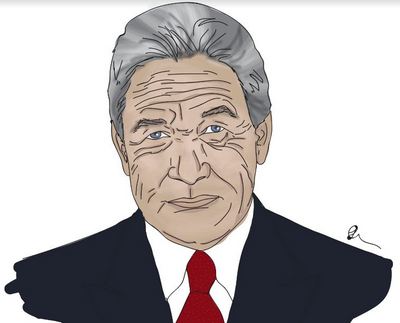 It's economic development day out on the campaign trail. Winston Peters is calling for Ports of Auckland to be shifted to Northport - in the Whangarei electorate seat New Zealand First's Shane Jones happens to be standing in. He's proposing tax-free zones around Northport and down in Invercargill as well.

Meanwhile, Economic Development Minister Simon Bridges has announced an economic strategy for Taranaki. Parliament may have been dissolved and the election campaign begun, but that hasn't stopped National Party Ministers continuing to announce policies in their official capacities, something that is annoying the Labour Party. Bill English says it's all ok though.

First out of the blocks was Peters. In a move described as "Stalinist" by the Road Transport Forum's Ken Shirley, Peters said Northport should be the entry point for goods currently coming in through Auckland. Labour's Phil Twyford didn't seem to have a view on the proposal either way on Radio NZ this morning, while English said the proposal was a bit of a "red herring." That left a gap open for Shirley to offer his different sort of criticism. He argued that the majority of goods that came in through the Ports of Auckland were consumed in Auckland; shifting entry to Northport would push up delivery costs. Auckland Mayor Phil Goff would rather something in the Firth of Thames.

Here's a taste of the proposal from Peters, who addressed an economic development conference on Thursday:

Only parochialism is keeping the port in the Auckland region instead of logically looking to Northport – a natural deep water port.

Aucklanders and Northlanders will end up paying a huge financial price if the Port of Auckland is not moved to Northport.

Auckland Mayor Phil Goff has confirmed the Firth of Thames is his preferred option - in a move that could take between 10 and 20-years.

Given a new mega-port in the Firth of Thames could cost upwards of $5.5 billion, this is money badly spent, when Northport could be developed within a decade and for so much less.

Going with Northport means 77-hectares of iconic Auckland waterfront could be returned to Aucklanders by the late 2020’s, as opposed to the late 2030’s or perhaps even, the early 2040’s.

The Port of Auckland is moving so the question becomes whether it will despoil fish spawning areas in the Firth of Thames, or light the spark of Northland’s economic renaissance.

We will order government and council officials to stop spending tax and ratepayers’ money on a new port in the Firth of Thames, estimated at up to $5.5bn and highly problematic environmentally.

Thinking outside the box with Special Economic Areas (SEA’s)

National and Labour have failed the regions. Northland has some of the worst social statistics in New Zealand with decades of neglected infrastructure. Southland similarly lives on a knife edge given Tiwai Point’s uncertain future.

Based on successful models overseas, Special Economic Areas are like economic islands within the Port environment. Aside from biosecurity and key legislative requirements, they will be subject to less compliance and will have tax and duty free status.

These will be highly attractive to value-add manufacturing, logistics and allow New Zealand to access entrepot trade. The potential future value is measurable in the billions of dollars that will radiate into the regions that surround them.

Economic Development Minister Simon Bridges was also canvassing the regions on Thursday. In a Ministerial capacity he announced a plan for the Taranaki region. He then quickly swapped hats and announced a $200 million spend on the preferred option for the region's Mount Messenger bypass, which he made as Minister of Transport. The decision had actually been made last Friday, so it seems Bridges was keen for a two-for-one deal in the region.

Contrast this to announcement from Bridges on Tuesday that National would fund Nelson's Southern Link road, which was a party election campaign announcement made in his capacity as National's transport spokesman.

Economic Development Minister Simon Bridges has joined Taranaki councils and the business community to launch an economic development strategy for the region.

The Minister is in New Plymouth today to join the local community at the launch of Tapuae Roa - Make Way for Taranaki, which provides direction for the region’s economy.

“Taranaki’s economy is mostly based on the oil, gas, dairy, manufacturing and other sectors. This strategy will build on this through boosting skills and enterprise to grow Taranaki into a modern, high-value economy," Mr Bridges says.

“While the region has a noteworthy technology profile, the strategy also highlights the lifestyle and culture of the region. The region can be proud of its achievements with the award-winning Len Lye Centre, the coastal walkway, WOMAD and many others.”

The strategy was commissioned by Taranaki’s four councils and was developed by business and iwi leaders, the region’s councils and central government.

It identifies a number of action areas including boosting tourism and visitor services, growing the Maori economy and focusing on improving skills and innovation.

“The opportunities highlighted in the strategy will go a long way to Taranaki continuing its reign as the second best region in the world as voted by Lonely Planet, building on its visitor sector and taking the economy to the next level,” Mr Bridges says.

An action plan currently being developed will be released later this year and will identify priority actions to deliver the regional strategy.

Through the Regional Growth Programme, central government agencies will work in partnership with Taranaki stakeholders to develop and implement the Action Plan.

For more information on the strategy, go to www.makeway.co.nz.

And on the bypass:

An eastern alignment has been selected, which will bypass the existing Mount Messenger and provide a more direct and efficient route. This alignment was known as Option C during public consultation.

“In 2016 the Government announced that funding would be available to accelerate this project as part of the Accelerated Regional Roading Programme,” Mr Bridges says.

“State Highway 3 is the key link between Taranaki and the Waikato. Improving the safety and reliability of this route is a real priority for the Government. The new route will contribute to the ongoing economic growth of Taranaki.

“After over a year of extensive assessment and consultation, it’s exciting to now be able to announce the selected option for the Mount Messenger bypass,” Mr Bridges says.

The eastern alignment option delivers safety, resilience and travel time benefits whilst avoiding geologically unstable areas. It is also the preferred option of both the road transport sector and the Department of Conservation.

“This project will provide a host of wider economic benefits, including additional local employment opportunities, the development of region’s tourism sector and a much-needed reliable freight and lifeline route connecting Taranaki and the Waikato,” Mr Bridges says.

“Taranaki has the highest Gross Domestic Product per capita in New Zealand. This new and improved route will help increase productivity in the region and provide a safer, more resilient connection to the Waikato.

“The new route will ensure Taranaki’s goods have greater and more reliable access to domestic and world markets as well as providing better access to tourist visiting the region,” Mr Bridges says.

The project is estimated to cost $200 million and will be funded through the Government’s Accelerated Regional Roading Programme and National Land Transport Fund.

The project is expected to be complete by 2021.

While I'd like the port to be gone from Auckland and more jobs in Northland would be good, I don't think any sensible government should control businesses in this way. This is third world country stuff.

Is there any region in NZ that isn't getting a shiny new road from National? Who is the tax and spend party again?

Auckland wil continue to be a third world city while you have to stand in the rain to watch the Rolling Stones
Get rid of that dreadful port and build a Darling Harbour.

Where do you see the Stones play in Darling Harbour so that everyone can stay dry?

It was Dylan at the Entertainment Centre, Stones at Rod Laver Melbourne and Mt Smart, Eagles at O2, london and Telstra Dome Sydney,, trust me, they are covered.
Vector is OK now and Aotea Centre design is suspect, like Hammer Hall in Melbourne, but they are all covered

Meanwhile Jacinda ventured out of Ponsonby to visit the rural folk of Takapuna and Albany.

Jacinda with the nice smile

Shifting the port will have to happen but with 95% or more of it being for Auckland and further South it seems rather naive to suggest that the port should go north other then winning votes for a man who does not seem to be in the hunt.
Mayor Goff's idea will mean lots of dredging and continuation of that. Apart from the fact that the Miranda Bird club will throw up a good fight.
Not looking at any road and rail upgrade which will have to happen no matter where the port goes.
Personally I like Waiheke Island and a tunnel straight onto the motorway.
There is no easy solution

Quite fun looking at the chart and choosing a site. http://www.linz.govt.nz/sites/default/files/media/ntm/chart/tiff/nz53_1.tif

Good on you, had any good ideas?

By the time the containers are on rail they may as well keep going and bypass Auckland CBD alltogether.
Aucklands manufacturing is on the outskirts of the CBD and it will be blessed relief to close the adjacent wharves
Our favourite hotel is adjacent the port, have had lot of time to observe.
More chance of surviving the death run into the city.

I wouldn't be surprised if the port option is traded off for the Americas Cup hosting rights at Marsden. Easily done and pretty sensible also.

That is a hilarious idea.
Of course we dont know what the yacht design is yet.

all those that say to hard are so far wrong its not funny.
it is already happening elsewhere in NZ, Tauranga to Auckland , timaru to Christchurch , inland ports at Hamilton. new plymouth
having a deep port and plenty of land for expansion are the most important factors not where the port is, logistics can take care of that (rail and inland ports)
a huge amount of containers are already railed to inland ports/ trucking companies from Auckland port so trucking cos can make shorter trips and achieve more output per truck.
if it went to marsden, the rail would need upgrading and a new inland port built and linked in massey near
sh18 to service the shore and west Auckland
south Auckland is already covered with the wiri terminal

It's not necessarily too hard. But I'd like to see some business cases rather than Winnie randomly deciding where the port should be. Why not expand Tauranga for example?