For those who like the raw numbers, here is a summary of the 2017 election votes counted and preliminary seats won, compared with other recent general elections

For those who like the raw numbers, here is a summary of the 2017 election votes counted and preliminary seats won, compared with other recent general elections 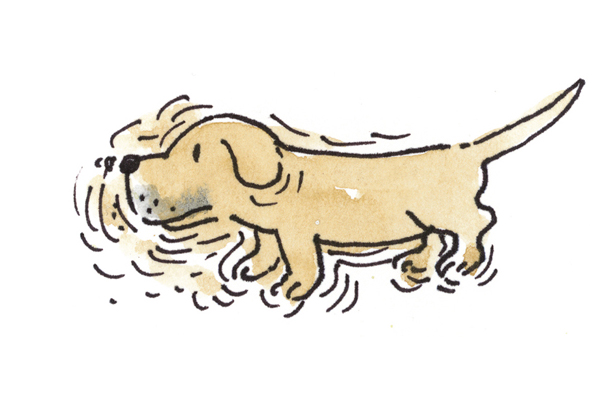 Official results from the 2017 general election are expected to be announced on Saturday, October 7, 2017 at 2pm.

In the meantime, coalition negotiations will be carried out. Both the major parties need NZ First to form a government; the Labour Party also needs the Greens.

While this is happening, it is useful to put the 2017 election into perspective compared to past elections.

After the special votes are added to the election night counts, it seems clear that the National Party will have attracted more than 1 million votes for the fourth election in a row.

That level has not been achieved by any other party yet.

The Labour Party vote has recovered from the disastrous results in the past two elections, bouncing back to levels it once attracted regularly from 1999 to 2008.

However, in that time the total number of participating voters has grown 24.1%.

New Zealand First has seen its party leader lose his electorate seat, and its vote fall by 21.7%. But it holds the balance of power. 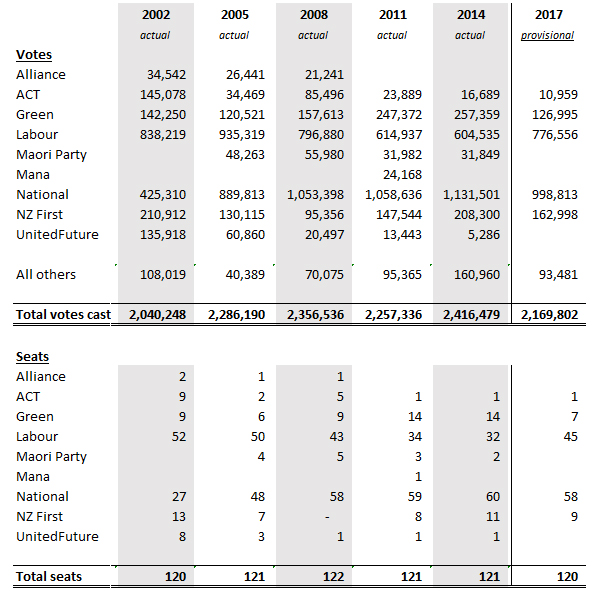 To form a Government, a coalition needs to have at least 61 votes in Parliament (either by a formal multi-party agreement or via a confidence-and-supply agreement).

We will update these tables when the final official counts are available.

UPDATE:
Here is the final result.

Thanks David
It would be interesting to see the party breakdown of special votes in previous elections.

I found the 2014 special results and crunched some numbers. My guess for the final result is
National 56 seats
Labour 46 seats
Greens 8 seats
NZ first 9 seats

Left/right only two seats in it, so little if any moral mandate to go with National, and my suspicion is that he will go left.
If the much higher number of special votes is due to a more highly engaged left vote, then the shift could be greater and if even only one more seat changed, both sides would be equal. Very interesting.

are you suggesting ACT will have no seat ( impossible ) or just conveniently omiting it ?

I think he is suggesting their seat number won't change regardless of the special vote. There are only 119 seats listed above.

No, do your arithmetic, the above numbers add to 119. Act can't form a part of any government because NZ first will not allow it. Even David Seymour said that on the night.

You said "2 seats between the Lef and the Right" - which is wrong even on your very "a spirational" hypothetical numbers after the specials are counted ; ACT is an extra seat for the Right.

In terms of right wing supporting members you are correct, but Act cannot form part of a right wing government however much they would like to.

The irony is, if National hadn't given away the seat to ACT, they would be in a better bargaining position than they are now.

Wrong .. had they won Epsom for themselves they would get 1 less top up seat ; their overall number of seats would be the same .
It is you who is not overly smart ...

National on its own would be in a better bargaining position rather than being seen doing deals to keep an extreme (Winston's word) party in parliament. That extra seat ACT holds does not help them in forming a coalition.

Exactly why peters is waiting. If he was thinking of going with national he could open up more now

Rule 1 of poker: never give any your position. Always make your opponents thing they can win so you can grow your pot.

What is interesting is that this time round National got a larger share of the vote than Helen Clark ever did in her three election victories.
And yet a whole lot of lefties are claiming we just had a vote for change.

Although number of voters are up 24.1% in that time. This would reduce National's current 1m vote back to about 800k for comparison.

I'm talking about shares of the vote.
Even combined with the Alliance, Clark never topped 43%.

True, but the left's votes are more widely spread across parties than the right. You could still support Auntie Helen by voting Green whereas since 2011, the other right parties (ACT/UF) are a rounding error.

The Greens didn't used to be a Stalinist party like they are now.

Not sure this is what they campaigned on...

Stalinism is the means of governing and related policies implemented by Joseph Stalin. Stalinist policies in the Soviet Union included rapid industrialization, the theory of socialism in one country, a centralized state, collectivization of agriculture, cult of personality,[1] and subordination of interests of foreign communist parties to those of the Communist Party of the Soviet Union—deemed by Stalinism to be the leading vanguard party of communist revolution at the time.

The Greens are deeply hostile to capitalism and they purged the environmentalist wing in Stalinist fashion.

This analogy is about as believable as a Stephen Joyce financial review i.e. 46% of people will believe it :)

And target the dirty Kulaks! Stalin would most definitely approve.

Thanks David , very clear picture of voting patterns from the tables

This is interesting as well for voting patterns. https://thespinoff.co.nz/politics/27-09-2017/interactive-mapping-every-b...

There is almost no point at all looking at raw data until all the votes are in, especially not comparing actual with preliminary. 15% "special" could really change the picture.

I agree nearly 400,000 uncounted special votes in comparison to the biggest voting block being not even 1 million is huge. It is still mathematically possible for instance for the Labour + Greens vote to exceed National party votes.

Because of the nature of special votes -people enrolling late, outside electorates, overseas etc is materially different to ordinary votes -we cannot know for sure what way this vote will split.

So while this information is interesting David Chaston -it is pure speculation on what the 2017 voter wants. We cannot do that analysis until the full count is completed.

It is actually disrespectful to all those people who made an effort to vote, not to wait for all the votes to be counted before pundits, media etc make announcements,analysis etc on what the election means.

It will be fascinating to see how the Greens fare in specials. Will they receive the same drubbing they did at the ballot box? My guess would be that Specials being predominantly overseas voters would mean that they lag NZ a bit in voting trends due to lower media exposure, so could pull Greens down (MeTu scandal) and elevate Labour (Jacindamania). No electorally significant changes either way.

Why is everyone assuming that national will reduce after special votes are counted (It happened earlier does not means for definite that will happen now - though most probably will) and what if they get extra 2 seats (than don't need any support) and what happens if Left gets 1,2 or 3 seats. If 3 seats than both will be on 55 vs 55 and if two seats than 54 vs 56 (Gap reduces).

SO WP is correct in waiting till special votes are counted. Anything and everything is possible as 400000 votes is a good number in NZ.

Bryce Edwards had an interesting perspective on the National vote a couple of days ago. Some food for thought for those who missed it.

There is a strong narrative at the moment that National has received an extraordinary result. But has it really? The vote for centre right parties has actually declined significantly at this election. At the 2014 election, the aggregate vote for National, Act and the Conservatives was over 52 per cent. This year, the final result for those parties is projected to be little more than 45 per cent. What's more the National Party has now lost allies - United Future and the Maori Party are gone from Parliament, and Act's party vote has halved. Basically, National has cannibalised the vote of other rightwing parties. In devouring its coalition partners, National might now look stronger, but in reality, fewer voters are actually supporting parties of the right.

What, so you just stand in one spot, vote the same way every time, regardless of how much policy might change. Respect the swing voter, they are probably the only ones who vote on policy.

The win at any cost mentality will eventually be their downfall...

Apologies if this has already been stated by someone else, but for those pundits calling for a return to FPP and decrying the "failure" of MMP the 2017 results based on FPP are as follows:

This says more about NZer's & pundits failure to understand proportional representation after 8 elections....

And for a bit of fun, if we extrapolate the number of ACT voters it would take to capture a majority of electoral seats in our new 71 seat House then the number would be 394,000 out of 2.17 million voters = 18%.

I'll keep MMP thanks, despite the weakening of the minor parties this time around.