Australia's Home Affairs Minister Peter Dutton, who challenged PM Malcolm Turnbull, has resigned from Cabinet and will sit on the backbench

Australia's Home Affairs Minister Peter Dutton, who challenged PM Malcolm Turnbull, has resigned from Cabinet and will sit on the backbench 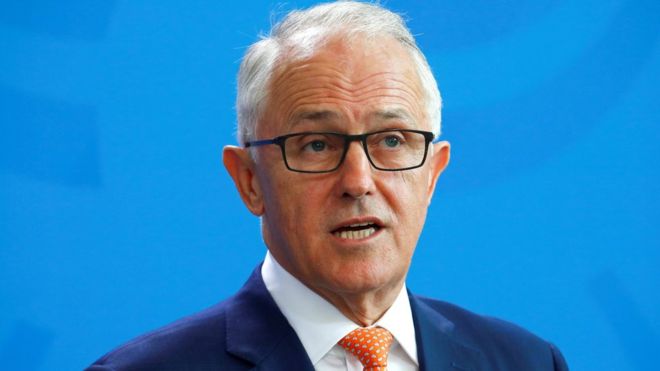 Dutton has resigned from Cabinet and will sit on the backbench. This is despite Turnbull saying he was able to stay on as a Cabinet Minister.

The Liberal Party’s Deputy Leader, Julie Bishop, will remain in her job after winning the ballot uncontested.

Speaking to reporters in Canberra, Turnbull referenced “unity” a number of times.

He says Dutton has done an “outstanding” job as Home Affairs Minister and Turnbull thanked him for his work.

“I have invited him to continue in that office, however, he has said to me, and we have had a good discussion about it, he doesn’t feel he can remain in the Cabinet, having challenged me for the Leadership of the party.”

Turnbull says he does not bear a grudge against Dutton for his leadership challenge.

He says there are always differences within political parties, but it’s important those are left in the past.

Not long after Turnbull addressed media, it was Dutton’s turn. He told reporters his decision to challenge Turnbull was not because he had any animosity towards him, but because he wanted to make sure [Labor Leader] Bill Shorten is never Prime Minister.

“I believe I had the best prospect of leading the Liberal Party to success at the next election.”

He says he “fully support the Prime Minister and the Cabinet” but would not rule out another leadership challenge before the election.

Tuesday’s vote, he says, is a “reminder to political parties to be united and determined to keep delivering for the people for whom they work.”

He says disunity undermines the ability of any Government to get its job done.

As the leadership ballot was secret, Turnbull was not able to say who voted against him.

Bishop says the vote was an “overwhelming vote of support for the Prime Minister.”

“I have seen leadership challenges before and it’s a resounding vote of support in the leadership team – we don’t take it for granted.

“What I say to all those who didn’t vote for the Prime Minister, we now have the opportunity to focus on what the electorate want to hear from us.”

Earlier on Tuesday, the leadership of the Governing Liberal Party was declared vacant as MPs gathered in the Aussie Parliament to vote.

The leadership spill came after Turnbull backtracked on two of the party’s major energy policies within 24 hours.

They're between a rock and a hot place.

Australia is a coal-fired nation, coal-exporting, and it's cooking itself. What can you expect but obfuscating vested-interests, and two choices of denial-level? Who'd live there from here on?

Truth be told I think most Kiwis would rather be a part of an economy squeezing resources out of the ground to create wealth than in their homeland where employers are in the business of squeezing everything out of the people to amass wealth.
Speaking of poor leadership, Jacinda promised GST cuts on basic food items and strengthening ComCom to crackdown on price fixing, not a peep about that since Nov 2017.

and what happens when there are no resources left in the ground to extract? Though frankly the effects of peak production of a raw material will have a devastating impact long before there is actually none left.

In terms of poor leadership a GST change is not leadership issue, policy failure maybe. However considering the mess Jacinda/Labour inherited and the more obvious priorities being addressed first its hardly a biggee. On top of that I cant see anything in google saying it was a promise this time around, back in 2010 sure. Can you point to a link please? Right now all I recall and indeed find is they would setup a tax working group which they have done.

I have a slight problem with your definition.

Wealth is access to resources. Money is a proxy. No resources, no value to the proxy. Simple really.

Jack swapped the family cow for five magic beans, as I recall. It needed a fairy-story to paint him in a good light too.

Problem with food is that if we valued it properly (ex one-off fossil fuel input, ex child/slave/repressed labour and ex disease-via-monoculture) we would be a tad surprised. And a lot 'poorer'.

Will they go slow on deporting Kiwis, now that Dutton has gone ?

Don’t know if any of the leadership has been all that good since probably John Howard and he naturally had his fair share of faults if you listen to the media. What exactly though has Turnbull done wrong and who exactly could have done any better. This smacks of a palace revolution, cooked up in the kitchen by Abbot. Would have thought that Turnbull has proven himself satisfactory, far beyond the capability and performance of Abbot, wouldn’t take much to do that though. There it is.