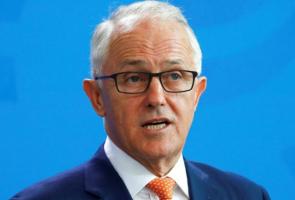 Australian Prime Minister Malcolm Turnbull says he will step down as Liberal Party Leader if a “spill motion” is brought before a party in a meeting on Friday.

Turnbull says he's now waiting to receive a letter of no-confidence with the signatures of the majority of the party room.

“If I receive that, I will convene a new party room meeting.”

That meeting will occur midday tomorrow, he says.

During that meeting, he says he will invite a “spill motion,” and if it is carried, Turnbull will treat that as a vote of no confidence and will not stand as a candidate in that ballot.

If he is defeated, he says he will leave Parliament.

“I have made it very clear that I believe that former Prime Ministers are best out of the Parliament and I don’t think there is much evidence to suggest that conclusion is not correct.”

But before that, Turnbull says it’s important the party has access to the advice of the solicitor general on the eligibility of Peter Dutton to sit in Parliament.

Questions have been raised so to whether Dutton is eligible to be in Parliament.

Fairfax Media has revealed the childcare company operated by Dutton’s family trust has received more than $A5.6 million in Government funding since 2014.

Labor has written to the Attorney General with advice by prominent barrister Bret Walker, SC, that the “preferable argument” is that Dutton is ineligible because he may have an “indirect pecuniary interest”

“A minister let alone a Prime Minister, who is not eligible to sit in the House is not capable of validly being a Minister, or exercising any of the powers of a Minister," Turbull told media on Thursday.

Turnbull says Australians will be “rightly appalled” by what they are witnessing in their nations’ Parliament this week.

“The reality is that a minority in the party room, supported by others outside Parliament, have sought to bully and intimidate others into making this change of leadership they are seeking.”

He says it is “remarkable” polls had the Liberal Party neck-and-neck with Labor.

In the hours after, 13 Liberal Party MPs took to Twitter to say Turnbull has lost the support of the party.

Dutton, who resigned from Cabinet to the backbench, revealed on Twitter on Thursday he would be challenging the leadership again.

“A few minutes ago I spoke with Malcolm Turnbull to advise him I believed the majority of the party room no longer supported his leadership.

“Accordingly, I asked him to convene a party room meeting at which I would challenge for the leadership of the Parliamentary Liberal Party.”

Not long after his statement, he addressed media in Canberra and repeated the comments but did not take any questions.

Hours later, senior Liberal MPs Mathias Cormann, Mitch Fifield and Michaelia Cash told a press conference that they have told Turnbull he has lost the support of the party room.

“It's with great sadness and a heavy heart that we went to see the Prime Minister yesterday afternoon to advise him that in our judgement he no longer enjoyed the support of the majority of members in the Liberal Party,” Cormann said.

He says Dutton should lead the Liberal Party and another leadership vote should occur soon.

“There is majority support in the party room for change.”

In a press conference on Tuesday, Turnbull said he had invited Dutton to remain on the front bench, but he declined.

Turnbull said he does not bear a grudge against Dutton for his leadership challenge.

Soon after, in his own press conference, Dutton refused to rule out another run at the leadership.

“I believe I had the best prospect of leading the Liberal Party to success at the next election.”

Other morning news from Australia , banning Huawei from participating in mobile network infrastructure

Unfortunately, banning Huawei won't eliminate threats to national security as other contenders are in bed with the CCP as well.

Nokia and Ericsson, though headquartered in Finland and Sweden, manufacture their equipment in China through JVs with Chinese government-linked companies.

Dutton appears to have all the attributes necessary to be an outstanding Aussie leader, receding chin and a Akubra hat.
What a circus, thank goodness we settle for MMP rather than Aussie's pathetic electoral system.

and a nasty piece of work.... If you ever wanted evidence on the cultural differences between Aus and NZ, our respective politic system and the calibre of individual is all you need to see.

Compare to theirs, we have a good bunch of kids and all are playing nice to each other.. God helps them and blesses us!

I'll gladly swap Politicians with you, cash your way.

Can't be much in cash given the capital gain is pretty miserable lately.
Nah, I'll stick around. At least I can come back whenever I want to

It's just a revolving door now over in Oz.

Dutton is an idiot if he thinks his tenure will be a long one. The numbers are marginal at best. So he wins by a few votes. It only takes the next contender to turn 5 or 6 people and bang the queue behind him all move forward a step.

It is one thing National did do well - Pick a leader and stick with them. Cease the infighting and popularity power plays, and just govern the country!

It took Labour 9 years, but they finally worked it out.

NZ just doesn't have the political extremes Australia does. Only last week there was a senator calling for the "final solution" on Muslim immigration, - seriously far right lunatics. The PM seems to spend all their time trying to compromise and appease the factions, rather than lead. Nothing ever seems to get done quickly - same sex marriage legislation is another good contrast.

It's only because they appear to be moving away from a two party system, into a multi-faceted one.

This is what coalition govts the world over look like. More individualism, lunacy, and targeted Bribes policies, all while being less efficient.

We are relatively stable because we are still a two party system, albeit with a couple of minor sub-groups to appease the less central voters.

NZ doesn't have the problems associated with Muslim immigration (..yet) for us to comment on it. I am sure politicians who raised their voice several years ago against extremist migrants from those communities to the UK and Sweden were laughed out of the room. I am afraid the situation in those countries isn't funny anymore.

Very true - Just look at our own Mr Peters. He got voted in to fix a problem he raised 20 years ago.

Just FYI, I listened to the speech and the use of “final solution” was in no way what you are implying. Context matters, if not I can now say “Te Kooti uses language like final solution in his posts!” Doesn’t sound good and while it’s technically true, it’s not what you intended at all.

Yup, it was an exceptionally poor choice of words and from a man that I have no time for, nor do I agree with, but the context wasn't the Nazi extermination extremism it's been made out to be, and I'm a pinko-commie-lily-livered-snow flake-liberal.

The last Aussie PM to serve a full term was John Howard. That's a while ago now...

Over here it's only 3 PMs to go until Xmas

Malcolm Turnbull deserves much better than the rubbish he's had to put up with.

The poles indicate strong support for the labour party so their answer is to throw out the most centrist member of their party and install one of the most right wing. Real bright! They may have better luck with Julie Bishop and appeal to the female vote.

Whoomp, there it is!