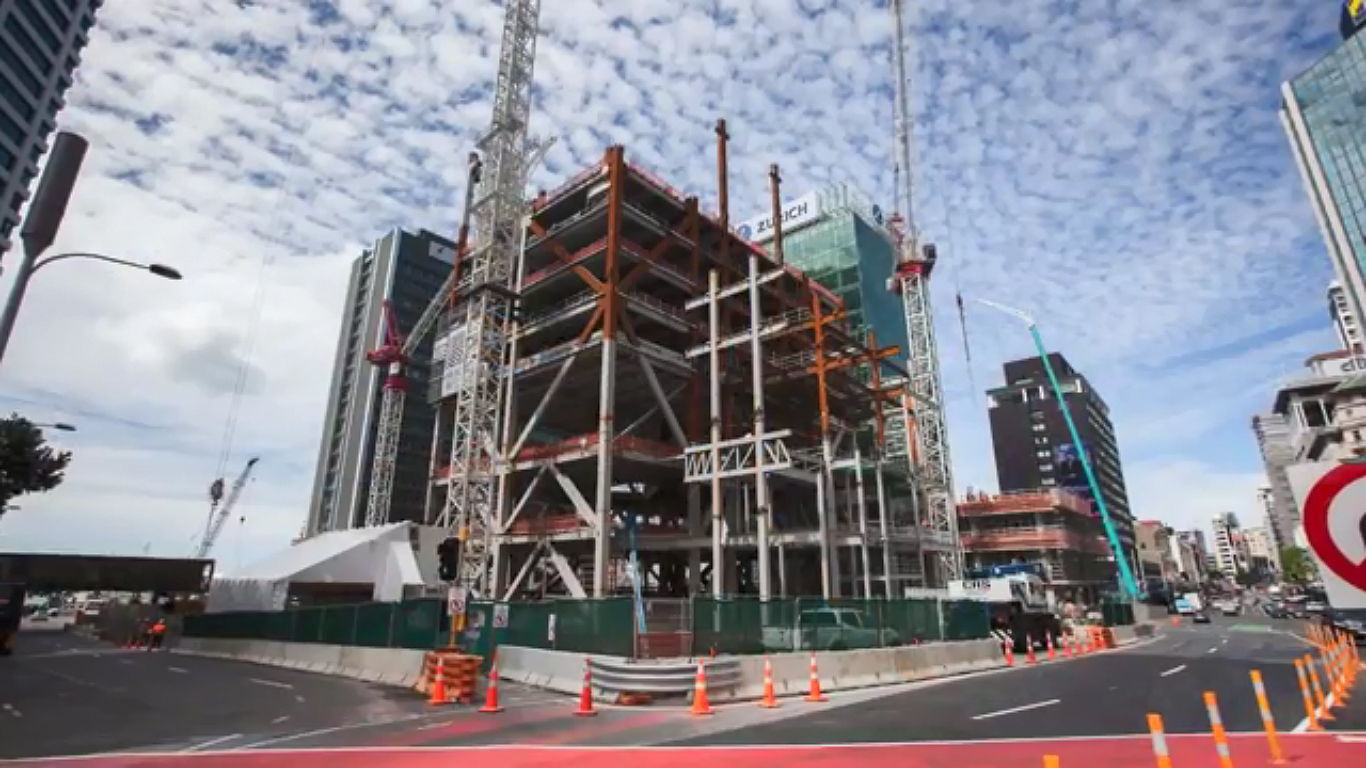 Cranes at the Commercial Bay redevelopment

There are more construction cranes active in New Zealand today than ever before.

In September there are 140 cranes at work, an increase from 125 in March, the last time this survey was taken. That has involved 64 new cranes at work, replacing 49 that ended their projects.

“The level of construction activity remains high across the country due to strong underlying demand across nearly all sectors,” said Chris Haines, RLB’s spokeperson. “Not only will the population and migration surge of recent years continue to support demand for construction for some time to come across the residential sector, but significant demands remain on commercial, retail, health, education and horizontal infrastructure sectors.”

The counts in this survey do not include mobile cranes which are increasingly used for mid-rise construction.

Auckland continues to be the main driver of the fixed crane count, contributing about two thirds of the total New Zealand count. Of the 140 cranes sighted across New Zealand, 90 were in Auckland (increase of 8.4% in 6 months), 22 were in Christchurch (+69%), 10 were in Queenstown, 8 were in Wellington, 6 were in Tauranga, 2 were in Dunedin and 2 were in Hamilton.

Despite the recent announcement of the Ebert receivership, coupled with Fletcher Construction’s withdrawal from the vertical construction market, Auckland’s crane count remains on the rise. Currently, Fletcher Construction accounts for ten tower cranes, while Ebert Construction’s Union Green site accounts for two. There still remains uncertainty about the impact these failures will have on future crane counts, and future large projects in Auckland and across New Zealand.

In the commercial sector, three cranes remained on site for the Commercial Bay office project. These are expected to stay in place until late 2019. Notably, there were no cranes recorded on health projects in Auckland currently despite significant forward workload planned in the health sector. Despite the perception in the market that the construction sector is at capacity and resources are stretched, the crane numbers have again increased. Two tower cranes remain idle at the Ebert’s Union Green Project and two former idle cranes at Alexandra Park have commenced again following CMP Construction taking over from Canam Construction.

A list of most large Auckland projects, ones involving a budget of $100 mln or more, is here. It is a list that now totals more than $70 bln of work either in process or planned.

Christchurch saw a surprising jump in crane numbers in this survey with 22, up from 13. Previously in Christchurch, the crane count has dropped, emphasising the decline in workload. In contrast to this decline in workload, cranes have risen especially in the commercial sector, with a net increase of seven cranes together with two new cranes on the new Convention Centre.

Scratch one from Christchurch. The Smith Cranes Liebherr 200 ECB 10-tonne tower crane on the Sudima hotel construction site (corner Salisbury/Victoria/Montreal) vanished from site over last weekend. Site is in the clad and fit-out stage. The survey most likely predates that...

Ooooh. Cranes are just the classic bubble indicator. Will it end well? It goes like this, following a period of stability people have the confidence to start investing in big construction projects. Things start off sensibly enough, but the nature of a construction project is that a large sum is spent in a short time, a lot of it on wages, so things pick up generally and more projects are started. Since it is a self feeding process this creates a runaway feedback system where more and bigger projects are undertaken until something breaks, usually spectacularly. You get a lot of empty half finished buildings, a lot of useful cheap buildings and a lot of bankrupt and unemployed people.

Usually there is some sort of spectacular fancy "iconic" project just dripping in hubristic superlatives that comes to be seen as the peak of delusion and marks the point where supply completely and definitively overwhelms demand. Are we there yet? I don't see us building the tallest building in New Zealand just yet, but then I live in a nice Sleepy Hollow, otherwise known as Sunshine City, or just plain old Nelson, so I probably wouldn't know.

Last time around we had a local example, ACC commissioned a fancy new building, very high eco standards, much chest puffing "Look at me, look at me, I'm so clever" and so forth, despite their existing offices being arguably the best in Nelson. The rental on the new building was something like 3 to 4 times the old rental. They just had money to burn.

Is Auckland really the next Shenzen, or are we kidding ourselves?

Auckland is different, I thought you would know that by now!

My thoughts follow yours though after seeing it all just last week when crossing the harbour bridge.

I am reminded of the time in 1988 when I did a bit of extra work in security. Mainly rock concerts, but one job was standing on a tower building site in Auckland city for 12 hours stopping anyone entering the bankrupt project. A lot who where trying were subbies trying to recover their tools.

Nice to hear a real anecdote. I think we undervalue experience. It's all well and good for people like me to carry on pontificating as if we know what we are talking about.

For some reason Price Waterhouse springs to mind as the name upon it back then, but I could be mistaken.

Eden security was the company I was contracting to, run by a guy big Maori fellow that looked about 180kg. Probably spent a big of his youth a bit lighter, no doubt faster, and being the sort of man that didn't lose to often. Working stage front for 80,000 people at U2 was probably my highlight.

Dublin's crane count today is fast approaching that of its peak in 2006/2007.

Its correcting that "undersupply" problem. You know, like the one that Sydney had a couple of years ago. LOL.

Construction cranes in NZ
90 in Auckland
22 in Christchurch
10 in Queenstown
8 in Wellington
6 in Tauranga
2 in Hamilton
2 in Dunedin
What are the implications for urban development?

The much hyped North Island 'golden triangle' is not visible in crane figures.

Drawing a long bow there aren't you? How exactly do high rise buildings correlate with the industries dominant in the Golden Triangle.

Two seaports and Hamilton, a dairying/agricultural hub. Really not seeing why high rise buildings are all that relevant to those activities. Although with 90 cranes in Auckland you really can't say the golden triangle is under represented anyway.

What about those poor Fonterra staff, surely they deserve a new Global headquarters? I mean, their offices must be getting a bit tired by now and they do need cheering up a bit.

It is mostly PR spin..

However Tauranga and Hamilton have plenty of room, they can expand outwards, they do not need to go upwards yet.

More like the sliver triangle, as in the sound of baby boomers selling up and leaving Auckland.

At least 1 of the 6 cranes in Wellington is for deconstruction rather than construction. The earthquake damaged Revera building being carefully demolished .

A second crane is over the Indian High Commission building, which has stalled due to the Ebert Construction bankrutpcy.

This article is taking me back to Brisbane three years ago, they had the highest number of cranes in Australia (something like 149). Now you can almost name your price when buying an apartment, which is great for FHBs. In one recent ad, there is a free Mini convertible for an inner city 3br apartment.