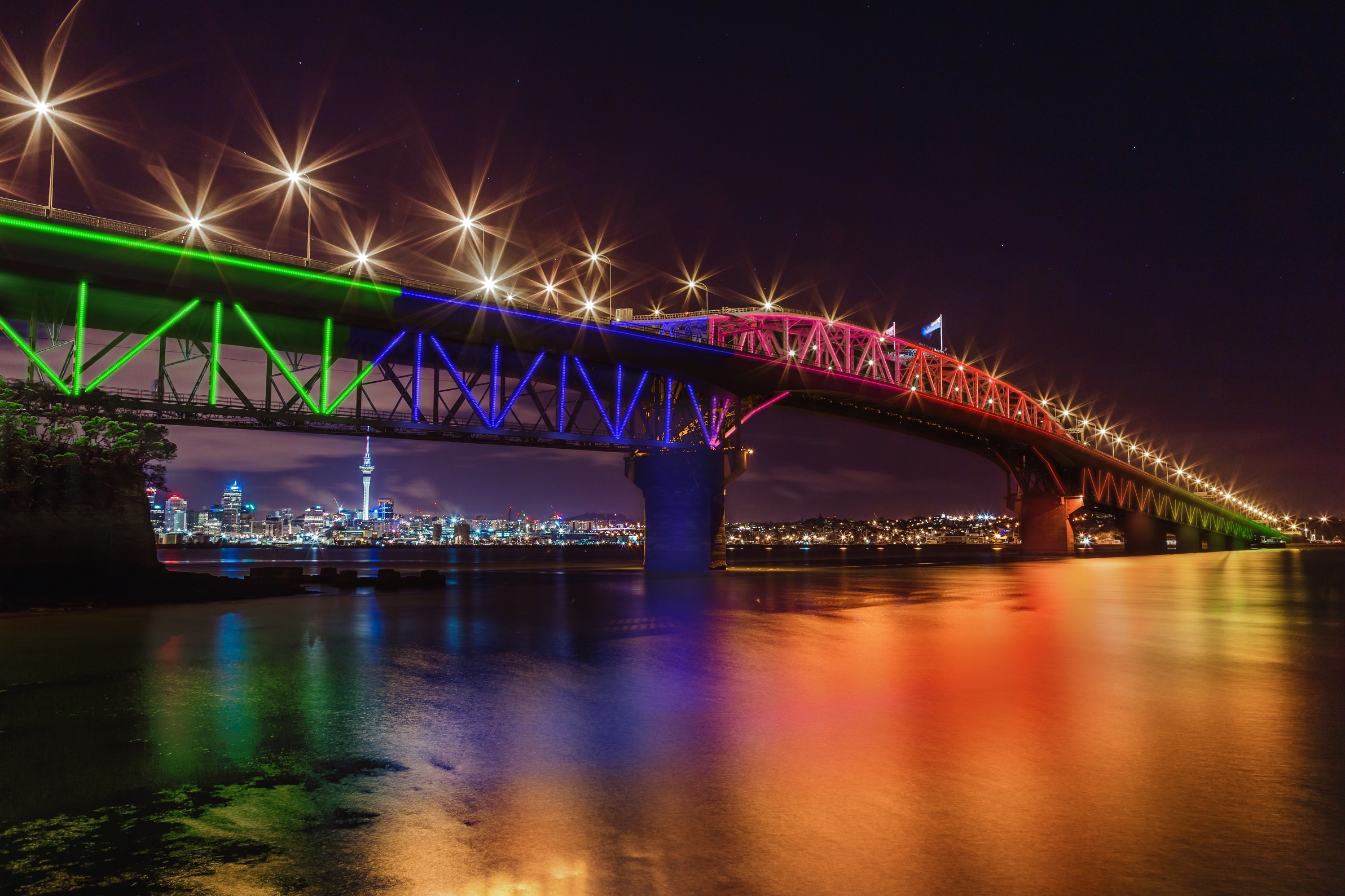 A tunnel under Auckland’s Waitemata Harbour is once again being considered by the Government in a bid to battle the city’s traffic gridlock.

But even if it is given the green light, work won't start on the proposal until the 2030s.

It says the Auckland Harbour Bridge has reached its capacity and with the projected traffic growth future heavy vehicle restrictions will be required.

“While public transport use is showing strong and sustained growth, the approaches to the Auckland Harbour Bridge are at capacity for vehicles in the morning (AM) and afternoon (PM) peak periods and heavy vehicle use is increasing.”

And according to the briefing paper doing nothing doesn’t appear to be an option, with harbour bridge traffic flows forecast to increase by 17% by 2046. The NZTA report says using the crossing for light rail only, while using road pricing for cars using the Auckland Harbour Bridge would result in the best outcomes for the city centre.

While the other option of a joint light rail and road tunnel would still create congestion for southbound traffic and severe congestion north of the bridge which would require further motorway widening. Morning peaks hour travel would still be congested with both options, even with the use of road pricing.

The Auckland Transport (AT) North Shore Rapid Transit Study report from 2017 said the Northern Busway would reach its capacity in 2030s and put pressure on the Harbour Bridge and city centre public transport infrastructure. It concluded that a higher capacity public transport system would be required in the next 25 years.

It found the Northern Busway was forecast to reach operational capacity sometime during the 2030s. It also said bus-only public transport was unlikely to be the sole long-term solution for the growing demand for cross-harbour public transport. The report identified light rail as the “most flexible and stage-able transport mode. It is a proven technology and could be integrated into a wider network (such as the airport link)”. It says light rail could operate almost entirely within the existing Northern Busway corridor.

While heavy rail would cost more:

“However, it has potential for high capacity and allows for wider long-term connectivity with the regional rail network.”

But the latest version of the harbour crossing isn’t new. In 2016 the idea to build a $4 billion tunnel under the harbour came to light in a 2010 report from NZTA which said it could be built sometime between 2030 and 2050.

The Transport Minister at the time, Simon Bridges, said the Government hadn’t made a decision on the project. But like all good Auckland public projects they do take time. In fact talk of another harbour crossing has been around for decades.

Can you ask Darryl where the business case is for the North West Light Rail? Would be a missed opportunity to not connect the North West to SH1 at Constellation.

If we do end up with that light rail connection Westgate-Constellation then Greenhithe will have the full set - bus, motorway, cycle lane and rail.

Suburban development banned until 2042 obviously, because there is some hill above Orewa. Auckland planning is hilarious.

Unfortunately the congestion on SH16 completely cripples SH18 as a viable alternative for SH1. Linking them up would be the smart forward thinking thing to do. Which is why I'm sure it will never happen.

I dont bother trying to go over the bridge on SH 1 any more when going into Auckland , I go on SH 18 over the harbour via Hobsonville area

Its further , but after 9.00 am its way quicker with sometimes a bit of congestion around Lincoln road due to road widening

If I am going to Hamilton for example I use SH18 and then SH20 through the tunnel and join SH1 South of Manukau thus avoiding a huge amount of congestion and frustration , not to mention the shockingly bad drivers one encounters South of the city

Auckland will need to increase the capacity of its motorway network as grows outwards, large amounts of low density growth requires big long transportation corridors (like motorways). The city is already going to add capacity to the NW and SW motorways with the building of adjacent light rail. This is the next step.

I don't envy the planners trying to estimate the AHB usage in 2046.

That said, to be using assumptions like "with harbour bridge traffic flows forecast to increase by 17% by 2046." seems totally unrealistic when there are known game-changers on the not to distant horizon.

Can anyone see us not having autonomous vehicles by 2046? Once they are safe and cheap the uptake will be exponential. Presumably this will allow traffic flows (including public transport) to be optimized leading to a substantial increase in vehicle capacity on the bridge.

It seems that because it's all a bit too difficult to predict when we will have autonomous vehicles we carry on to plan to build on the unrealistic assumption that it won't happen. Perhaps it's not a bad thing that nothing will get built until the 2030s.

Totally impossible to predict what effect autonomous cars will have. They could lead to a massive increase of individual vehicle use as everybody exits shared public transport options. Why sit on a bus/train with a bunch of noisy smelly strangers when you can take your own private vehicle and watch the latest episode of Married at First Sight/youtube on your 5g connection/argue with idiots on interest.co.nz :) and do your hair/eat breakfast on your way into work while the car drives itself, then send the self-driving car off to park itself. It'll need some sort of artificially imposed cost or limit to manage traffic would be my guess.

Some interesting analysis here too: https://www.greaterauckland.org.nz/2019/03/06/nzta-confirm-harbour-cross...

Boring company is touting tunnel conduits for cars something like $30million per km + 50million per station for the equivalent capacity of a 4 lane motorway with transport speeds of ~200km/hr. 100km of track + 30-40 stations around Auckland would fix our transport woes for a generation or two.

Ha what a joke Auckland Planning is. Born and bred there I dream of the day I can walk across the harbour bridge. Gave up and moved to Welly..were I can walk, ride, or catch a bus ..the choice is mine each day. Longest wait for a bus is 5 mins on average. New Harbour Bridge with rail, walking, 4 lanes should have been started years ago... keep talking Auckland as you keep filling that harbour up with extentions.

our planning is always only for 20 years that is the problem, a good company will have a 100 year plan
take this short term planning, as soon as its finished it will be at capacity, who was the short sighted person who has not seen all the houses going up at karaka and out the back of papakura, and lets forget about drury
https://www.nzta.govt.nz/projects/southern-corridor-improvements/
$2b-plus town centre, 2500 residences planned for Drury
https://www.nzherald.co.nz/business/news/article.cfm?c_id=3&objectid=119...

Well, partly because of whining noises that are constantly emitted from ratepayers. It's always too hard, it's always not in my backyard etc.

A bit like that busway we all ended up paying down the debt on even though literally nowhere else in Auckland has one and the Shore still has the cheek to moan about not having rail.

The bus lane cost a small fraction of the rail electrification and tunnel project costs. And its just as good if not better because its way more flexible and therefore reliable! And don't now go on about green. Electric buses will come.

I'm not questioning the busway, I'm questioning people on the Shore who get things a decade before anyone else in Auckland and then moans about having to pay for stuff in other areas.

here is a radical idea, lets just close one door and reduce the influx to 20k a year, that way we will have time and if new tech comes along we may find a better cost effective modes
whos knows the future of autonomous vehicles or other techs,
take electric scooters as an example, started out as a kids toy now a viable mode for inner city folk

the Ponzi needs new money coming in sharetrader, or the base collapses.

2030 is to late, waste of time. We will all be driving tiny electric cars by then so there will be and extra lane on the existing harbour bridge by just changing the lane markings, problem solved.

Best short term solution is to extend the busway across the bridge to the central city. The buses will be quicker than cars , (who will have 1 lane less), and more will uses the buses. Time to stop pandering to people averaging 1.2 occupants per car, or charge them full cost , including these billions required to increase capacity.