Under Prime Minister Hun Sen, Cambodia has become a haven for companies eager to circumvent the trade war. This does not bode well for America’s ability to enforce its tariffs against China – or for Cambodia’s future

Under Prime Minister Hun Sen, Cambodia has become a haven for companies eager to circumvent the trade war. This does not bode well for America’s ability to enforce its tariffs against China – or for Cambodia’s future 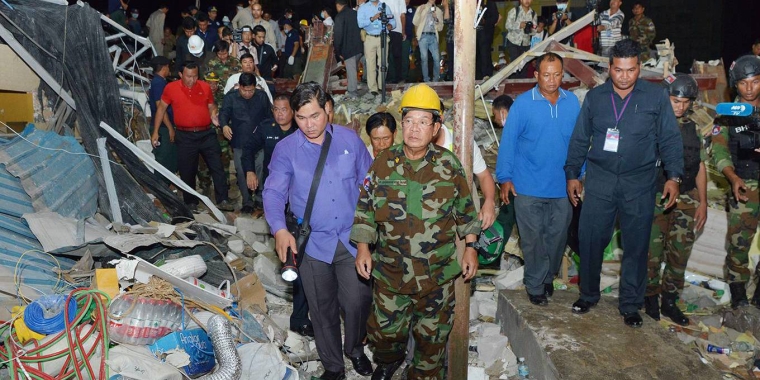 The US Department of Homeland Security has fined several companies for evading President Donald Trump’s tariffs on imports from China by rerouting them through Cambodia’s Sihanoukville Special Economic Zone. The Chinese-owned SSEZ highlights how Cambodia, acting as China’s compliant and corrupt colony, threatens the enforcement of Trump’s tariffs and, more broadly, US interests in the region.

China is Cambodia’s largest aid donor, investor, and creditor, and Sihanoukville – Cambodia’s only deep-sea port, through which about 70% of the country’s trade moves – is the first link in the chain of China’s massive transnational infrastructure investment scheme, the Belt and Road Initiative. But, far from becoming rich from BRI investments, Cambodia is being crushed by them.

Chinese businesses operating in the SSEZ buy and sell from one another, meaning that local people do not see any of the wealth they bring to Cambodia. On the contrary, living conditions for Cambodians in fast-growing Sihanoukville are deteriorating rapidly, owing to a lack of effective land-use planning or community-focused investment.

Just this month, a seven-story Chinese-owned building in the city collapsed, killing at least 18 people, with others still missing. At the end of May, a Chinese-owned hotel and casino was forced to close, after the environmental group Mother Nature Cambodia discovered that it had been deliberately pumping raw sewage into the sea. Urban planners predict that, within 30 years, Sihanoukville will have a million inhabitants – and be a failed city.

Cambodia’s capacity to alter its fate is limited. Like many other small countries in the region, it is being squeezed by the exorbitant interest rates, predatory loan practices, and opaque contracts that characterize China’s “new colonialism.” In fact, many of the developers pouring money into Cambodian real estate and casinos, which cater exclusively to Chinese guests, are tied to the Chinese mafia and triad gangs. And, like a loan-sharking victim, Cambodia’s debt is now so high that compliance with China’s political and diplomatic demands is the only alternative.

But Cambodia’s government is far from being a blameless victim. According to the World Justice Project, Cambodia ranks 125th out of 126 countries for adherence to the rule of law, and it ranked 161st out of 180 countries and territories on Transparency International’s 2018 Corruption Perceptions Index. Moreover, the 2018 Anti-Money Laundering Index rated Cambodia the seventh-riskiest country out of 129, worse than Nicaragua, Pakistan, and Yemen. A high risk of money laundering, the report notes, is strongly correlated with weak public institutions, the absence of political rights and the rule of law, and restrictions on press freedom.

In February, the Financial Action Task Force, the global money-laundering watchdog, echoed this assessment, returning Cambodia to its “grey” watch list just four years after its removal. The country, the FATF reports, has made minimal use of financial intelligence to investigate money laundering and terrorism financing; as a result, no money-laundering case has ever been prosecuted in the country.

That is unlikely to change anytime soon. Under the leadership of Prime Minister Hun Sen, Cambodia has become a haven for companies eager to circumvent rules – like those imposed by the United States – that threaten their bottom line. For example, in 2017, the US Customs and Border Protection agency found “substantial evidence” that Ceka Nutrition had been exporting Chinese-origin glycine, a chemical compound used in foods and pharmaceuticals, through Cambodia to avoid an US anti-dumping duty.

It was hardly an isolated case. In 2018, the American private security firm Academi (formerly Blackwater), which agreed in 2010 to pay a $42 million fine for violating US export rules, identified Cambodia as a target for BRI-related investment. The SSEZ’s recent denial that any company operating there had been fined by the US reinforces the suspicion that Hun Sen’s government will continue to turn a blind eye.

This might be good for a corrupt few, but it is bad for Cambodia. Already, the country’s deteriorating record on democracy and human rights is threatening its tariff-free access to the European Union market, provided through the bloc’s “Everything but Arms” trade regime. The last thing Cambodia needs is also to risk economic reprisal for helping Chinese firms to dodge US tariffs. Yet that seems to be exactly what Hun Sen’s government plans to do.

To restore its credibility, Cambodia must return to the democratic path laid out in the Comprehensive Cambodian Peace Agreement of 1991, building strong, transparent local institutions capable of reliably policing flows of goods and money through the country. Unfortunately, there is little reason to believe that Hun Sen will take this approach. That does not bode well for America’s ability to enforce its trade tariffs against China – or for Cambodia’s future.

Sam Rainsy is the co-founder and acting president of the Cambodia National Rescue Party.  Copyright: Project Syndicate, 2019, and published here with permission.

An element of the Trump business model being used by China and Cambodia. It was common practice for Trumps developments to carry his name as a front but actually involve a third party entity as developers and owners.

And there is the Chinese ambassador to uk telling us off for being “colonialist” over Hong Kong. Empires all hypocrites together

Isn't there a bit more to this story? There are US and other Western companies who've set up in Cambodia too right, taking advantage of cheap labour? Let's not forget the US carpet bombed half of Cambodia just a few decades ago, and it's of strategic military importance to both China and the US. The US would not want China to have easy access with military assets through Sihanoukville, the only deep-sea port, and China would not want the US to have a big economic influence in a country in its immediate vicinity. Is this just about tariffs and concern for the local population?

Lessons to learn if China gets too much of a foothold in NZ.