Mariana Mazzucato shows why only a forward-looking, entrepreneurial state can save the system from itself

Mariana Mazzucato shows why only a forward-looking, entrepreneurial state can save the system from itself 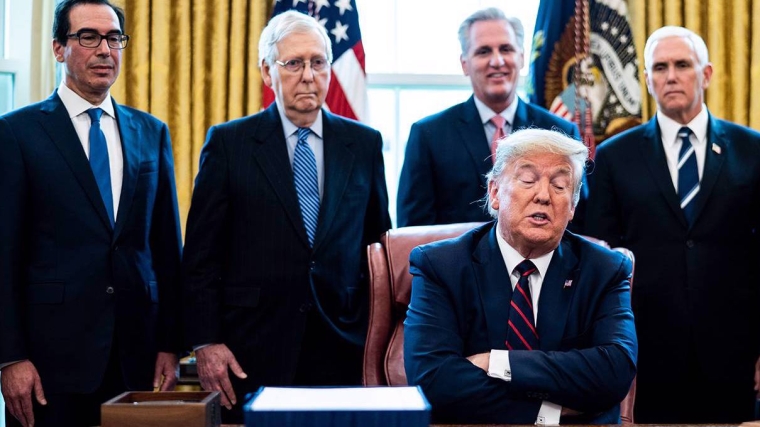 Capitalism is facing at least three major crises. A pandemic-induced health crisis has rapidly ignited an economic crisis with yet unknown consequences for financial stability, and all of this is playing out against the backdrop of a climate crisis that cannot be addressed by “business as usual.” Until just two months ago, the news media were full of frightening images of overwhelmed firefighters, not overwhelmed health-care providers.

This triple crisis has revealed several problems with how we do capitalism, all of which must be solved at the same time that we address the immediate health emergency. Otherwise, we will simply be solving problems in one place while creating new ones elsewhere. That is what happened with the 2008 financial crisis. Policymakers flooded the world with liquidity without directing it toward good investment opportunities. As a result, the money ended up back in a financial sector that was (and remains) unfit for purpose.

The COVID-19 crisis is exposing still more flaws in our economic structures, not least the increasing precarity of work, owing to the rise of the gig economy and a decades-long deterioration of workers’ bargaining power. Telecommuting simply is not an option for most workers, and although governments are extending some assistance to workers with regular contracts, the self-employed may find themselves left high and dry.

Worse, governments are now extending loans to businesses at a time when private debt is already historically high. In the United States, total household debt just before the current crisis was $14.15 trillion, which is $1.5 trillion higher than it was in 2008 (in nominal terms). And lest we forget, it was high private debt that caused the global financial crisis.

Unfortunately, over the past decade, many countries have pursued austerity, as if public debt were the problem. The result has been to erode the very public-sector institutions that we need to overcome crises like the coronavirus pandemic. Since 2015, the United Kingdom has cut public-health budgets by £1 billion ($1.2 billion), increasing the burden on doctors in training (many of whom have left the National Health Service altogether), and reducing the long-term investments needed to ensure that patients are treated in safe, up-to-date, fully staffed facilities. And in the US – which has never had a properly funded public-health system – the Trump administration has been persistently trying to cut funding and capacity for the Centers for Disease Control and Prevention, among other critical institutions.

On top of these self-inflicted wounds, an overly “financialized” business sector has been siphoning value out of the economy by rewarding shareholders through stock-buyback schemes, rather than shoring up long-run growth by investing in research and development, wages, and worker training. As a result, households have been depleted of financial cushions, making it harder to afford basic goods like housing and education.

The bad news is that the COVID-19 crisis is exacerbating all these problems. The good news is that we can use the current state of emergency to start building a more inclusive and sustainable economy. The point is not to delay or block government support, but to structure it properly. We must avoid the mistakes of the post-2008 era, when bailouts allowed corporations to reap even higher profits once the crisis was over, but failed to lay the foundation for a robust and inclusive recovery.

This time, rescue measures absolutely must come with conditions attached. Now that the state is back to playing a leading role, it must be cast as the hero rather than as a naive patsy. That means delivering immediate solutions, but designing them in such a way as to serve the public interest over the long term.

For example, conditionalities can be put in place for government support to businesses. Firms receiving bailouts should be asked to retain workers, and ensure that once the crisis is over they will invest in worker training and improved working conditions. Better still, as in Denmark, government should be supporting businesses to continue paying wages even when workers are not working – simultaneously helping households to retain their incomes, preventing the virus from spreading, and making it easier for businesses to resume production once the crisis is over.

Moreover, bailouts should be designed to steer larger companies to reward value creation instead of value extraction, preventing share buybacks and encouraging investment in sustainable growth and a reduced carbon footprint. Having declared last year that it will embrace a stakeholder value model, this is the Business Roundtable’s chance to back its words with action. If corporate America is still dragging its feet now, we should call its bluff.

When it comes to households, governments should look beyond loans to the possibility of debt relief, especially given current high levels of private debt. At a minimum, creditor payments should be frozen until the immediate economic crisis is resolved, and direct cash injections used for those households that are in direst need.

And the US should offer government guarantees to pay 80-100% of distressed companies’ wage bills, as the UK and many European Union and Asian countries have done.

It is also time to rethink public-private partnerships. Too often, these arrangements are less symbiotic than parasitic. The effort to develop a COVID-19 vaccine could become yet another one-way relationship in which corporations reap massive profits by selling back to the public a product that was born of taxpayer-funded research. Indeed, despite US taxpayers’ significant public investment in vaccine development, the US Secretary of Health and Human Services, Alex Azar, recently conceded that newly developed COVID-19 treatments or vaccines might not be affordable to all Americans.

We desperately need entrepreneurial states that will invest more in innovation – from artificial intelligence to public health to renewables. But as this crisis reminds us, we also need states that know how to negotiate, so that the benefits of public investment return to the public.

A killer virus has exposed major weaknesses within Western capitalist economies. Now that governments are on a war footing, we have an opportunity to fix the system. If we don’t, we will stand no chance against the third major crisis – an increasingly uninhabitable planet – and all the smaller crises that will come with it in the years and decades ahead.

Mariana Mazzucato is Professor of the Economics of Innovation and Public Value and Director of the UCL Institute for Innovation & Public Purpose (IIPP). She is the author of The Value of Everything: Making and Taking in the Global Economy.  Copyright: Project Syndicate, 2019, and published here with permission.

Not to repeat? C'mon - somebody at sleep here? in the F.I.RE economy (US,UK,OZ,NZ,Canada)- the first thing to revive is just that. Even in NZ the PM quick to give us a hint, just because loosing the job, the person should not have to sell the house. What she won't elaborate is just that, the person's DTI commitment, the banks easy credit, reckless lending etc. Then the following days? barrage of subsidies, loans, interim rules, QEs. You can see/hear any neo-liberal actors at play - they all played the same tune - socialised the loss en masse,.. GFCs rule book.

While all the banksters and elite plants are in charge, the cycle will repeat.

Wouldnt be and isnt an easy job to be in charge now. Like Trump, most of these plants are way out of their depth. And this may take care of itself anyway.

Interest bearing debt relies on growth to survive. And the owners of debt currently control the system through their plants.

Solution...Debt without interest, but perhaps an upfront charge or equity stake.

As soon as someone says climate crisis I switch off and stop reading as it means the rest of what they have to say is suspect in my book.

That is just ignorance. Chosen ignorance. And there's more to this one, so it's a pity you turn off and miss the nuance.

She mediated this at Davos - she all over the place, the German fellow a version of James Shaw and the real reason for the set-up becomes clear early: McAfee and his book. https://www.weforum.org/events/world-economic-forum-annual-meeting-2020…

It's worth watching. And - unlike you - I downloaded his book and read it that night. And picked the flaws. You gotta start from a dispassionate stance and be able to peruse the stuff which is contra to your own assumptions. If you stand the test, fine. If you don't, change/adjust. I found the McAfee book well worth the read - but a Lomborg/Norberg type of carefully-controlled, Cato-type-funded, crock.

"Entrepreneurial" and "State-led" are polar opposites. The OP's criticism of the GFC response was that the state intervened incorrectly. I tend to agree but the idea that this time it will be different is laughable. We already see the government backing winners.
We need entrepreneurs to take chances and not have the government, like at the GFC, decide who will survive and who won't.

"increasing 'precarity' of work". Precarity : I've never struck this word before. But I think I have deduced its meaning from the context, but I had to stop and think for a minute or so. I would have used the word 'precariousness' for NZ readers, everyone would then know the meaning and wouldn't waste time on fumbling for it.
The use of this strange word does reveal that the author is from the United States.
However, all in all, it was a very good article.

Typical Uni-speak. Lots of wonderful theory without a word on any delivery mechanism. Things will change. But first there will need to be civil revolt. This is the only message they will listen to.