Kevin Gallagher and Rebecca Ray highlight the potential benefits, and risks, of China's massive increase in lending to poorer countries

Kevin Gallagher and Rebecca Ray highlight the potential benefits, and risks, of China's massive increase in lending to poorer countries 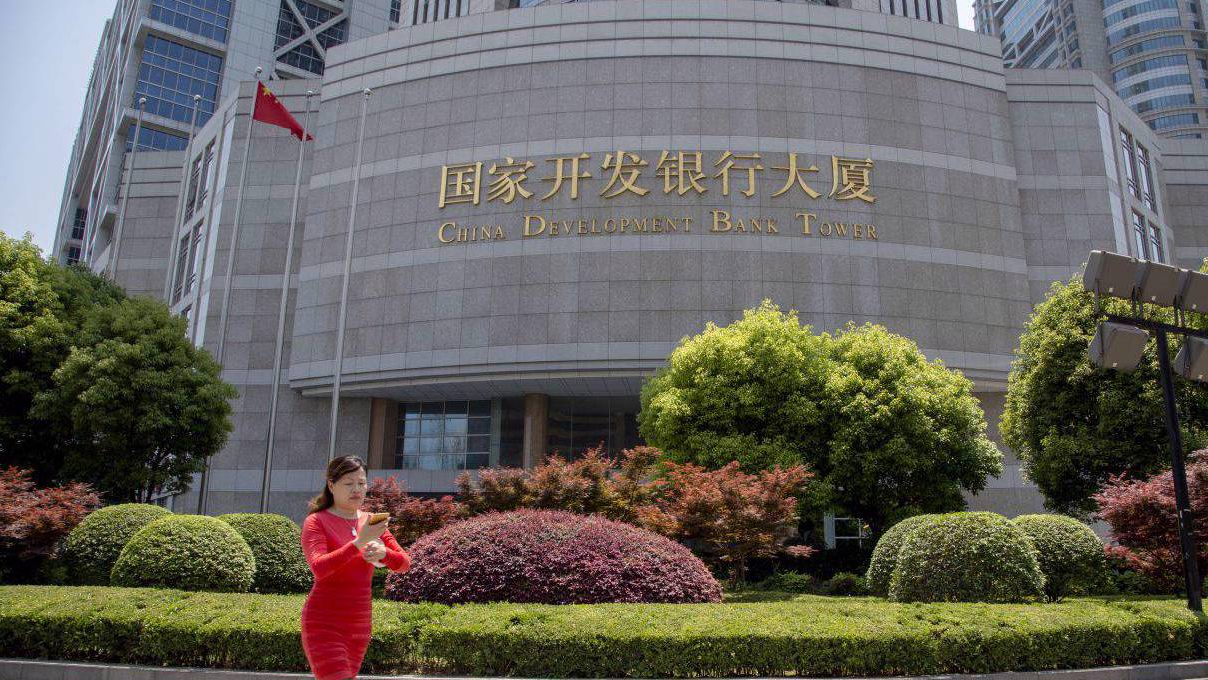 By Kevin Gallagher and Rebecca Ray*

According to new estimates, China now finances overseas development at nearly the same level as the World Bank. With countries currently struggling to combat COVID-19, protect the vulnerable, and mount a green and inclusive recovery, this significant increase in global development funding could potentially bring major benefits to the world economy. 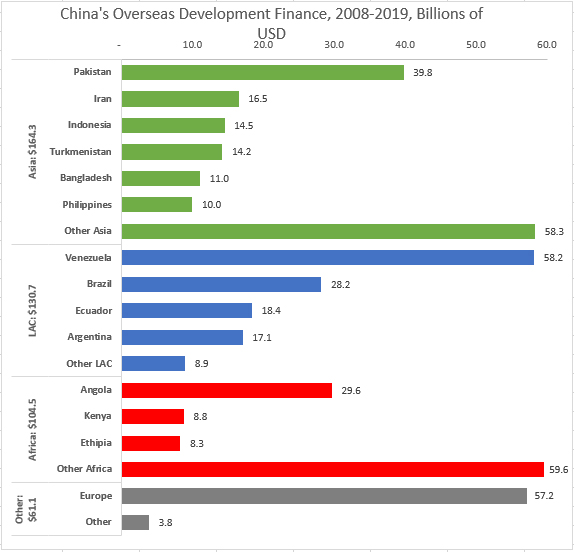 China’s development finance is highly concentrated in infrastructure – a sector with strong potential for spurring economic growth – as well as extractive sectors. The World Bank estimates that China’s overseas investments could lead to an increase in global real income of up to 2.9% by 2030, with recipient economies experiencing real income gains of up to 3.4%. In contrast, researchers using similar modeling techniques estimated in 2016 that the Trans-Pacific Partnership (TPP) trade pact would boost growth in its member countries by just 1.1% by 2030, and globally by 0.4%.

But the increase in Chinese development finance has raised concerns about possible debt distress in recipient countries. Although this financing spans the world, 60% of it to date has gone to just ten countries: Venezuela, Pakistan, Russia, Brazil, Angola, Ecuador, Argentina, Indonesia, Iran, and Turkmenistan. Several may now struggle with repayment obligations. 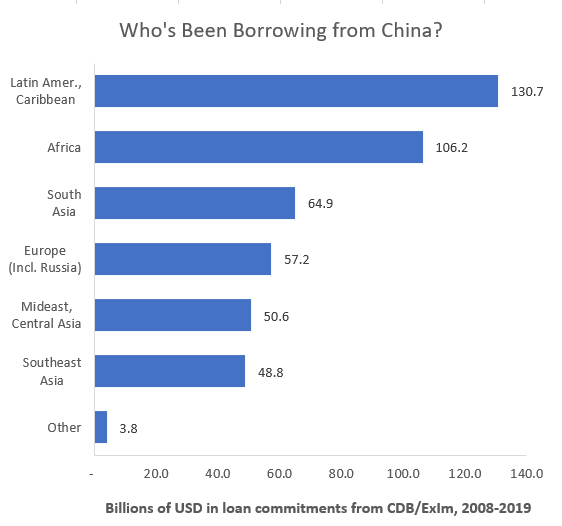 Earlier this year, the G20 established the Debt Service Suspension Initiative (DSSI), which suspended bilateral official loan repayments for 73 of the world’s poorest countries through mid-2021 as they struggle to tackle the pandemic and the associated economic crisis. According to the World Bank’s DSSI database, debt service owed to China through 2021 is similar to the debts owed to the World Bank and all multilateral creditors combined.

Chinese development finance also poses risks to biodiversity and climate stability. The new Boston University dataset locates each Chinese-financed project by its longitude and latitude, allowing users to pinpoint their proximity to sensitive regions from the standpoint of biodiversity. Of the 615 projects mapped there, 124 are in national protected areas and 261 are within critical habitats.

Moreover, in a recent article co-authored with Princeton University scientists, we found that between 2006 and 2015, public lending by China’s two policy banks financed more additional power-generation capacity globally (59 gigawatts) than the ten largest multilateral development banks combined (55 GW). Although this Chinese lending helped to increase global energy capacity, 64% of those plants were in the carbon-intensive coal sector and will emit more than 12 gigatons of carbon dioxide over their lifetimes.

China, its debtors, and the international community need to maximise the benefits and minimise the risks of this much-needed global development finance. Over the course of 2021, China will have three major opportunities to spearhead this effort.

Within the G20, China is already the largest participant in the DSSI, having so far suspended over $1.9 billion in debt service. At their November summit, G20 leaders adopted a framework that goes beyond debt suspension and could provide real debt relief for poorer countries. China could take the lead and require that countries benefiting from debt relief use their newfound fiscal space to advance green development goals.

In May 2021, China will host the Conference of the Parties to the Convention on Biological Diversity, and could pledge to align its overseas development finance with the new global biodiversity goals. This is a principal recommendation made by a body sponsored by the Chinese Ministry of Ecology and the Environment, and it would build on China’s domestic biodiversity-protection efforts.

Finally, at the United Nations’ COP 26 climate-change summit in Glasgow in November, China could promise to extend its recently announced pledge to become carbon neutral by 2060 to its overseas development financing. China is already a global leader in financing and diffusing solar and wind power domestically; by reorienting its development finance, it could rapidly spread these technologies around the world.

China has led the way in providing developing countries with the additional resources that they had long sought from the West. If Chinese lenders manage to align this funding with efforts to ensure financial and environmental sustainability, the world would stand a much better chance of achieving a green and inclusive recovery from the COVID-19 crisis.

Being helped with building roads, bridges, railways, airports and seaport by China is, on any count, better than being bombed by the US.

May the Belt and Road be with you.

China aiding in the obliteration of nature. Road by road. Port by port.

The one-child policy enacted by the Chinese Government was the biggest, boldest and most enlightened action by a government anywhere on the planet in response to the Limits to Growth study.

Now the Chinese government copies the industrial/ consumer mega-consumption policies of the west and ensures our speedy demise.

This today in The Guardian https://www.theguardian.com/environment/2020/dec/09/human-made-materials...

Let's build our way to a better future. Only through social, economic and cultural cooperation and integration can we put an end to wars

Is this from the Little Red Book?

It's in line with UN development and sustainability goals. Can you offer a better alternative?

A better future would require us to stop wrecking the planet.

"May the Belt and Road be with you"
More likely, they will Belt you and kick you down the Road if you don't co-operate.

Thanks for the re-publication, this is a really good article.

"After going quiet in the months before the election, federal authorities are now actively investigating the business dealings of Hunter Biden" Dad is not involved - even though the investigation was, conveniently, delayed so it wouldn't tarnish Joe's election chances - and Hunter's former business partner has public stated Joe is compromised.

Here's an immutable fact - if people are nervous about China's development finance they should look to their own govts to replace it. China is lending money because no one else will.
When in Rarotonga last year there was much angst about China building infrastructure there with concerns about quality and actual improvement of "joe Cook's" life. Fact is if NZ had stepped in first (the Cooks are a NZ protectorate) they wouldn't need China, initiatives from or financed by NZ? - ZERO

supports from rich western countries to poor countries have always been either verbal encouragement or food/cloth vouchers and some phone opportunities.

Western countries facing the invasion from China-March to their economy was a matter of time. Over the time China had silently pushed the bar higher and focused on the economic growth, which western countries tried to achieve via interest rate and external dominance. Unfortunately, that's coming to end. We now know that it's not the interest rate going to control the economy anymore rather the thoughtful decision and hard work of every individual in the planet. Essentially, the fates of our next generations will depend on our today's decision on that hard works we would perform today. That does not mean rest of billion population will have to work as hard as China does; rather they will have to learn from it, to re-organise the leaderships skills as well as to be thoughtful for future before implementing it. And future lies on who has the skills to manage the psychology and motivation the billions of population to achieve those goals. That also means to bring in dynamic leadership skill as well as ninja politician management capabilities. For now, it's better to think of a world without China to dream big, which western countries had always been good at around previous numerous centuries.