Auckland’s night-time economy is struggling. Recovery strategies include town centre regeneration, coaxing people back on to public transport, and getting a bigger share of the burgeoning domestic tourist pie

Auckland’s night-time economy is struggling. Recovery strategies include town centre regeneration, coaxing people back on to public transport, and getting a bigger share of the burgeoning domestic tourist pie 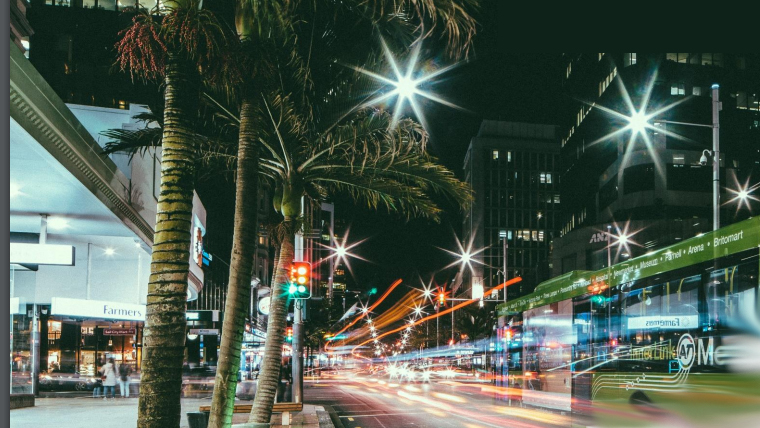 By Shane Martin and Shyamal Maharaj

• The number of people in the city and other centres around Auckland from 6pm is down from pre-pandemic levels.

• Spending data indicate that while people are spending roughly the same amount of money as they did last year, the composition has changed in what and where people spend.

• Businesses (especially in hospitality) in these centres are struggling, which puts the vitality of local economies at risk.

• Getting people back into our town and city centres will require a concerted effort.

Previously, we have looked at the population present during working hours in the city centre and found that post-lockdown, it was back at 80- 85% of pre-pandemic levels. Given this, it is not surprising to see reports that many businesses are struggling, particularly in hospitality. While some of these businesses serve the lunchtime crowd, we want to better understand how the city centre and other metropolitan and town centres around the region are faring in the evening hours (defined as 6pm to midnight in this paper).

Auckland is New Zealand’s largest city, and its city centre is the primary place where people work and play. Previously we have explained the significance of the city centre worker population to the Auckland economy and investigated how COVID-19 has impacted the number of workers in the city after the first and second lockdowns.

But what has been going on after the standard 9-5? Has all that pent-up demand to socialise actually drawn people back to the city?

Unfortunately, the short answer is no. Using Data Ventures population density data, we compared the average population present in the city centre during November and December of 2019 and 2020, months with no COVID-19 restrictions in the city. Most of the city centre was down relative to 2019. This is in part due to a lower number of international tourists. But it is not the only reason – locals are also not returning to the city centre. This could be because of more working from home, workers not staying downtown, fewer after-hours visitors, or more likely, a combination.

However, it’s not all bad news. Even though the population present in the city centre is down, we have events like the 36th America’s Cup that are massive drawcards to people and partly explain the lift in December 2020 population present in the Wynyard-Viaduct area. But even this event hasn’t gotten us back up to earlier levels. Longer term, keeping people downtown after work and bringing them to the city centre remains vital to downtown retail and hospitality businesses. 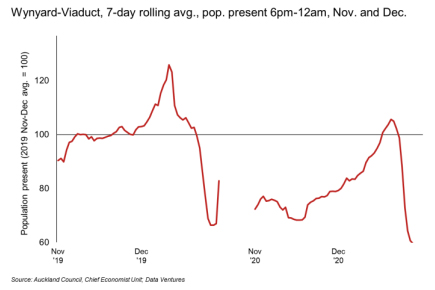 As important as all our local centres are (and we discuss them in detail below), the city centre is the face of Auckland for international and domestic visitors. It is also the commercial capital of New Zealand, with all the productivity and agglomeration benefits that implies. It needs to be a vibrant, appealing 24-hour place.

And although we are in the early days of the transformations needed to bolster our night-time economy, billions are being spent to bring the city centre on par with its metropolitan status and support its role as the focal point of productivity and the visitor economy in Auckland.

The city centre is not the only place that people work or go out. We also looked at the population present in the evening in the 10 metropolitan centres and 30 other large town centres across Auckland. We identified “destination” centres by looking at behaviours during lockdown level 4; if a centre saw a steep drop in the number of people in the evening hours, then those are likely to be destination town centres.

Unsurprisingly, there was a massive fall in people visiting shopping malls during level 4 lockdown, followed by a reasonably quick return to pre-pandemic levels. Again, the population present fell during Auckland’s return to more restrictive lockdowns in August and September, then bounced sharply again in the first couple of months after lockdown.

But since November, it’s been a mixed bag. The chart below shows the population present in the evening in St Luke’s metropolitan centre by way of example (the pattern for all town and metro centres is at the end of this paper). St Luke’s has lost foot traffic since before the pandemic, which is typical of most centres. It shows the Christmas rush, followed by a sharp decline after Christmas.

Overall, no malls had an increase in the number of people present during the evenings, and only about half returned to the levels seen during the same months the previous year. 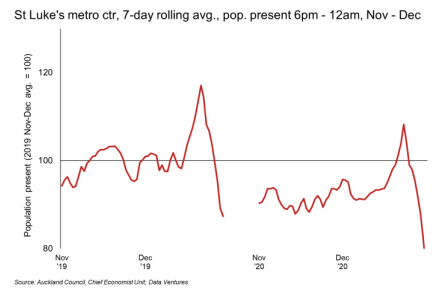 But is the pattern different in non-shopping mall destinations? In the north, the five destination centres all had population levels 15-20% lower than the previous year. On the isthmus, only Ponsonby was not significantly down, with evening population levels about the same as the previous year. In the south, both Mangere and Otara are down on last year.

Of all the destination centres (with or without shopping malls), only Otahuhu has seen a significant increase in its evening population. The reasons for this remain unclear.

Who does this hurt?

This downturn in people in centres after hours means the hospitality sector is struggling – a fact confirmed by spending data from Marketview. For the Auckland Region, outside of lockdowns, overall consumer spending in 2020 through mid-November was barely down on 2019.

But how that money was spent is dramatically different. Spending on hospitality and accommodation was down about 30% (year on year), but more importantly, down 10% even in Level 1. People opted instead for spending on groceries, liquor, and pharmaceuticals.

Taking spending data along with the number of people in centres after hours, it is evident that people are just not going out the same way that they did pre-pandemic. This is further confirmed by a 33% rise in domestic online spending in the September 2020 quarter. 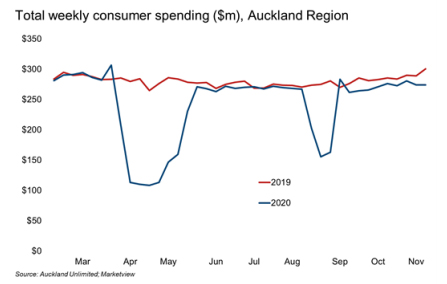 What does this mean?

We’ve shown that the city and other centres are almost universally seeing fewer people in the evening than they did in 2019. Bricks-andmortar retail and especially hospitality businesses are struggling as a result.

Although reduced travel to destination centres reduces congestion and emissions, there are downsides. Online shopping tends not to use local inputs, including locally-employed workers. You also don’t pop into the café next door for a coffee while you’re shopping from your sofa. This will skew where across our region and country money is poured into local communities, potentially raising inequality. Decreased foot traffic also detracts from the vitality of centres. This can create longer-term social issues such as poorer safety.

So, what are we to do? We need to get people back into our town centres. There is no single answer, but a strategy would include town centre regeneration, coaxing people back onto public transport (which is still down sharply from pre-pandemic), and getting a bigger share of the burgeoning domestic tourist pie (which we have not capitalised on much thus far).

But it’s not all the Council group’s job. Businesses need to think about how they work together to bring people back to these destinations after hours, too.

*Shane Martin is a senior economist and Shyamal Maharaj is an economist at Auckland Council. This article was first published here and includes much more detail on sub-regional activity. It is here with permission.

I am.sorry but you can regenerate town centers all you like, but if people have less money then they will shop less.

Throw in our premium pricing for many goods (especially compared to Australia - go on, check out the price differences between JB Aus and JB NZ), spending on discretionary items this year is bound to be well down. I see many larger organisations are citing the trading conditions as an excuse to not give out pay rises (really just adjusting wages in line with recorded inflation, not actual inflation), so we will see more and more of a deflationary spike, but it will be more pronounced in some sectors than others.

Its a bit of a weird situation because even with no international tourists the hotels are still very expensive due to isolation. If hotels were very cheap then I'm sure there would be a lot more domestic tourism. I wouldn't mind a couple of nights in the Auckland CBD for say $80 a night. But at $250 a night I'll give it a miss.

"We need to get people back into our town centres."

Bzzt, Incorrect. Hope is not a Strategy. Town centres have been dying for 3-4 decades, as the essentials of life can be delivered in a relatively peaceful, distributed, less-stressful manner to the places where people actually Want to live - the Suburbs. A few anchor stores aside (like Ballantynes in Christchurch) there's little practical point in a CBD anymore, and wishing there was, won't make it so.....

Perhaps the real reason for the plea in the article is the threat to their own Planners' Plans, and, by extension, Planners' (and Economists') Jobs......

On Fridays many choose to WFH, Suburban pubs (St Helliors, Takapuna etc) are busy by 3-4pm on a Friday, perhaps spend is similar but no longer in CBD.