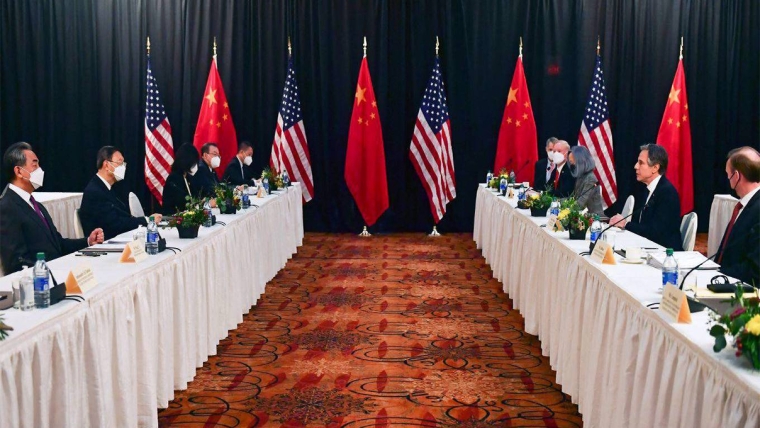 It wasn’t just the weather that was cold when senior US and Chinese officials convened recently in Anchorage, Alaska to try to reset their countries’ relations after four years of mounting tension. Sadly, the meeting was more reminiscent of the Cold War era than of a fresh start. That needs to change quickly – before it is too late.

Trapped in the politics of America’s bipartisan groundswell of anti-China sentiment, President Joe Biden’s team appears to be staying the course set by the previous administration, even upping the ante on the trade and technology conflict by raising human rights and geopolitical concerns, which Biden’s predecessor ignored. And China, trapped in a mindset born of a “century of humiliation,” compounded the problem with its assertive and defensive response. In full view of the media, the opening exchange was laced with charges and counter charges, with no discernible path for de-escalation.

A better way would be for both sides to go back to basics – the economics and trade issues that have long anchored the US-China relationship. That doesn’t mean dismissing other tough issues. It means reestablishing common ground and mutual trust before expanding the agenda. This is where the Biden administration needs to rethink its combative approach. On economics and trade, it has been boxed in by the “phase one” trade deal negotiated by the “former guys,” as Biden refers to the previous administration. And that is where there is greatest leverage for change.

Yes, the American public favors the phase one approach. The latest Pew Research Center survey, conducted in February, shows widespread support for a continuation of tariffs, with more people interested in getting tougher on trade with China than in building stronger ties. The unrelenting focus on China over the past four years as the source of much that ails the United States now has a firm grip on popular sentiment.

But that doesn’t mean the American public’s view is correct. The phase one deal was flawed from the start, mainly because it offers a bilateral fix for a multilateral trade deficit with many countries, some 96 in 2020. Thus, the deal never delivered. It didn’t reduce the US trade deficit, and it imposed a new layer of costs on American businesses and consumers.

Just as the US trade deficit was not made in Japan 30 years ago, it is not made in China today. Unsurprisingly, in both instances, the largest share of the US trade deficit could be traced to America’s largest trading partner – Japan then, China now. But this concentration is more a reflection of comparative advantage (buying goods that can be produced more cheaply abroad than at home) and supply-chain efficiencies (assembling components and parts made in other countries) than of unfair trading practices.

But, as I have written ad nauseam over the years, the US trade deficit is the result of a deeper problem of America’s own making: a shortfall of domestic saving. America’s net national saving rate – the broadest measure of the combined depreciation-adjusted saving of businesses, households, and the government sector – is in negative territory for the first time in a decade (and only the second time on record). According to the latest available data, it averaged -0.8% of national income in the second and third quarters of 2020. And in light of outsize federal budget deficits, there is a good chance that national saving will plunge further.

Lacking domestic savings, the US borrows surplus saving from abroad in order to invest and grow. That, in turn, sustains an outsize balance-of-payments deficit, which averaged -3.3% of GDP in the second and third quarters of last year – the widest since late 2008. In exchange for foreign capital, Americans buy goods from overseas. Balance-of-payments deficits, not the so-called China problem, are the macroeconomic source of America’s overall trade deficit.

The phase one deal is a political effort to micro-manage a macro problem. Even if it worked in narrowing the bilateral trade deficit with China, the persistent shortfall of domestic saving implies that the US trade gap would be diverted to other foreign producers – which is exactly what has happened. Moreover, that trade diversion has gone to higher-cost foreign producers, the functional equivalent of a tax hike on American companies and consumers.

None of this is to say that the Biden administration should wave the white flag and surrender to China. But it needs to shift its focus and abandon the unworkable bilateral framework of the phase one deal and the tariffs that support it. What is required, instead, is a robust structural agenda that addresses the far more serious problems of intellectual property rights, innovation policy, forced technology transfer, cyber security, and subsidies to state-owned enterprises. A bilateral investment treaty (BIT) is the best way to accomplish that, as well as to scrutinize the veracity of structural grievances. Actively negotiated for a decade prior to 2017, a US-China BIT would provide a framework to resolve structural tensions while encouraging growth in both economies through expanded market access.

These are not popular arguments in the US, thanks to four years of venomous rhetoric that has convinced many Americans that China poses an existential threat. Unfortunately, America’s corrosive politics of blame and victimization is fertile ground for allegations of being mistreated by others.

But it is time for a more clear-eyed approach – especially by a new US administration that is off to such a strong start in so many important areas.

China is a challenge for the US – but also an opportunity. Unfortunately, Biden has been boxed in by his predecessor. It will take political courage, wisdom, and creativity to break with the failed approach of the past four years. The US-China relationship is far too important to do anything less.

If you're only into asking why your deckchair-legs are getting wet........yes.

There isn't enough planet for China to grow simultaneously with the US. Biden's puppeteers (well, he's only a mouthpiece, right?) will be well aware of that. And that the only pathway is projected angst, followed by war. It was the industrial/military complex which put him there, never fear. Trump was a blow to the programme, but he got effectively sidelined (and I'm not sure Trump knew what a blow he was). His tenure probably staved off the war by four years - but the MSM in the West can only see him in Woke terms; the question of them is whether they're scared to address the bigger issue, pr whether they're just too steeped in mantra to climb their way out.

Actually quite a rare article under such political environment. Both sides need to get down to solve real problems constructively, not just acting tough in the theatre for their own audience back home. Inflaming ideology differences to gain support may be easy, but quote :"It will take political courage, wisdom, and creativity to break with the failed approach of the past four years."

Apologists for China like Steven Roach are arguing to protected their vested interests-big business and Wall Street who gained while Middle America was drained.
In the rapid ascendance of Japan from ashes in 1945 to 1975 Japan became such a powerhouse of innovation that in 30 years its exports of Automobiles and Electronics took the US by storm but during that rise no one ever accused-or has since-that Japan's rise was accentuated by their military systematically trawling through the American competitiors blue prints and proprietary information. They were and are true Free Trade Partners. What the Trump Administration unveiled was the curtain of protection that existed during the former 16 years of Bush & Obama Admistrations that hid who these Communist Chinese really were and the underhanded tactics they used to rise so swiftly. Obviously not needed in many industries where there 50/1 pay differential was enough alone to steal the business from American or Kiwi manufactures, but from Wind Turbines to Locomotives--not to mention Military equipment China is at war and steal anything they can get away with. These days the American people now know they have agents at work all over the US from Universities to High Tech Industries stealing and plundering as they go.
"Trust but Verify" Reagan's famous utterance used in the case of Russia is not even appropriate when it comes to the 2021 Chinese relations. Mr Roach wants to get the two countries back to square one. There was never a Square one--they have been bent since the beginning-its just that the American Public was not aware-they are now. This has become a Munich moment for the US.

In such an analogy, where would you put the US's Versailles moment?

Because the one led to the other.

China slowly siphoning the worldwide nations on land acquisitions, then migration of magic weapons agent and their further seeds of brand loyalty.
When eventually the other eventuality come close? - usually one would think those countries will side with US, China knew this and will always play a longer game cards. In small to medium scale event? China will receive supports from countries with ruling elite easily been bought, for big event? usually entire population.
So don't expect full frontal as the previous two events, .. this time is a game of 'who can corrode the others in longer term' - The elements to corrode must be identified, in the case of west banking systems? greed for $, has been identified.. now watch how that has been exploited and targeted mostly.

They must be loving the turmoil the West is currently facing: identity politics, BLM/Antifa, the Trump/Biden circus, Brexit, the EU migrant crisis, and of course covid. Death by a thousand cuts, largely self inflicted.

Japan was well neutered by General MacArthur, but it didn't lead to a uprising of pro Emperor nationalist insisting his Divinity be restored. The difference by 1945 was that socialism and Keynesian policies of the 30's allowed countries like the US to pour aid into their conquered and defeated enemies. No such enlightenment existed amongst the British & French who took the lead at Versatile, and their Allie the US did not.

To quote directly from the article: "And China, trapped in a mindset born of a century of humiliation." History have two sides...

But Steven Roach is right that we should focus on solutions. The dangerous path that Trump started will hurt small countries like us the most, and mostly for their own benefit.

Corporate America vs Authoritarian China. None of them is good.

Poor 45 was labelled Xenophobic for combating China and calling out their atrocities. Mainstream Media heralded the assault. This article forgets that Joe Biden loves China; him and his family deal with them as partners. China can take 20 minutes in their Anchorage speech to destroy the U.S. because American top officials are indeed compromised by their affairs to the CCP. China was alotted only 2 minutes, and they used 20 to name shame America. Not something that would have happened under 45.