ANALYSIS: How can Grant Robertson prepare a budget if he doesn't know how much of the $62 billion ring-fenced for COVID-19 has been spent?

ANALYSIS: How can Grant Robertson prepare a budget if he doesn't know how much of the $62 billion ring-fenced for COVID-19 has been spent? 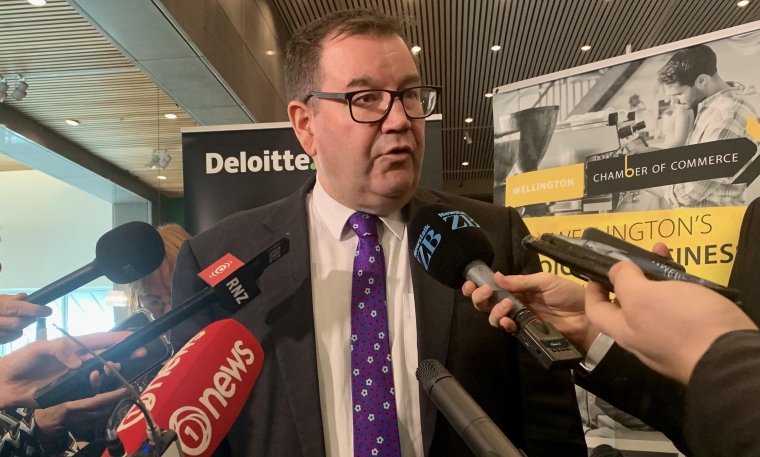 Delivering on its bold promises is this government’s weakness and it knows it.

Of all the things Finance Minister Grant Robertson could’ve previewed in his first pre-Budget speech on Tuesday, he chose to announce an “Implementation Unit” will be created to ensure the Government does what it says it will.

He said funding would be allocated in the May 20 Budget to hiring a handful of people to sit in the Department of the Prime Minister and Cabinet and monitor the Government’s large, inter-departmental initiatives around the likes of infrastructure and climate change.

The unit will report to Robertson - who stepped into a de facto ‘Minister of Delivery’ role after last year’s election, when he was given the Infrastructure portfolio.

Pulling off major infrastructure projects is central to the Government’s economic recovery plan, so coupling the portfolio with Finance and giving it to a safe pair of hands made sense.

Nonetheless, Robertson knows he still doesn’t have enough oversight of where all the funding he allocates ends up.

He couldn’t on Tuesday tell interest.co.nz how much of the $62 billion allocated towards the COVID-19 recovery last year has actually been spent.

Individual government departments have this information, but Treasury hasn't tallied it all up.

Robertson said this was an issue both he and the Office of the Auditor General (OAG) were concerned about.

Indeed, the OAG in February said in a report: “It would be difficult, if not impossible, for Parliament and the public to track how the COVID-19 funding decisions (by initiative) have been assigned to the various funding authorities (appropriations).”

The issue stems from the public sector’s long-standing accounting systems prescribed by the Public Finance Act 1989.

“How funding is sought is frequently different from how funding is appropriated and expenditure is reported in departments’ annual reports,” the OAG explained.

“Government departments’ annual reports include statements of expenditure incurred under each appropriation authorised by Parliament. But there is no requirement for those reports to separately identify expenditure funded in accordance with the Covid-19 funding packages…

“In our view, transparency and public accountability would be better served, and greatly enhanced, if the Government were to provide a regular, easy-to-access report summarising how much of the Covid-19 funding has been allocated, how much of the available funding remains unallocated, the actual amount of spending to date on main initiatives and, ultimately, what has been achieved.

“We recommend that the Treasury consider how such an overview of the Covid-19 funding and expenditure could be usefully presented.”

Nonetheless, two weeks out from the Budget, Treasury still can’t provide what the OAG said it ought to.

Treasury told interest.co.nz additional reporting will be available on its website in “coming months”.

The OAG said Treasury had “responded positively” to its suggestions and kept it informed on its progress.

However Robertson is eyeing an overhaul of the Public Finance Act.

“I believe the Public Finance Act has served us well from a transparency point of view, but often not at a project level. That’s because that’s simply not how the Act was set up,” he said.

“We do need to keep looking at that to see if we can improve that.”

But the question in the here and now is, should Treasury have set up a system last year to ensure the billions of dollars being allocated in the COVID-19 response are accounted for at a central point?

He responded: “I’d thoroughly endorse the OAG’s position. Financial reporting on spending is Treasury’s core role, I would have thought, and the responsibility to track COVID spending would seem to be primarily theirs.

“That said, they’ve had a lot on their plate in recent times.”

Indeed, Treasury has had a huge year. But keeping track of what comes in and what goes out is surely at the core of its job - even more so at a time we are talking seismic amounts of money that'll shape New Zealand for years to come.

The pressure is now on Robertson to see if he can deliver on a framework to help us measure whether he's delivering on the Government's spending plans.

'He couldn’t on Tuesday tell interest.co.nz how much of the $62 billion allocated towards the COVID-19 recovery last year has actually been spent.
Individual government departments have this information, but Treasury hasn't tallied it all up.'

Who runs the show. The bureaucracy that’s who. They are not elected anymore than they are accountable. The bureaucrats just carry on regardless. Regardless that is, of whatever cloth of government is elected. Untouchable are them what know best.

I'd suggest the cabinet and their respective portfolios are unable to ask the right questions and get appropriate answers in a specific time frame. Perhaps they don't understand the answers!

Maybe they could try some OIA questions.

This is the mental process of the average NZ voter when weighing the gravity of governmental spending and oversight:
Facebook, instagram, mortgage, house prices, ooh nice car oh what's this government announcement:
"We will continue to keep looking at attempting to appear like we're doing something." Cool sounds like they know more than me, Instagram, Facebook, was that racist? CO2 levels ugh.... Yum ice cream.

Thanks. I do weddings.

If you want to read something truly scary read today’s herald piece by ex Labour politician Richard Prebble on GR. “ Even Mexico, Nigeria and Venezuela are not as indebted to the rest of the world as New Zealand." and “ In one year, New Zealand has blown 30 years of hard-fought fiscal rectitude. Its public debt will explode from the equivalent of 19 per cent of Gross Domestic Product last year to 54 per cent by 2022, on the Government's own figures”.

A debt to GDP figure of 54% is no reason for concern.

Does the nominal value even matter in an inflationary environment? Realistically an infrastructure project that might have cost $bn between 2009 and 2019 might now cost substantially more because building materials and commodities are moving up daily. We had our chance to do big infrastructure cheaply.

This is the terrifying thing. We have literally nothing to show for it. Our public sector can't deliver projects and our construction sector can't get a stable pipleline of work, so we're forever rebuilding the construction sector to replace people who leave for better paying and more stable opportunities elsewhere. All of this puts downwards pressure on wages and living standards - less of an issue if you're on a sweet Wellington desk-job with five weeks of annual leave plus additional long service leave, but bad news for anyone in the private sector in the face of now-non-existent redundancy provisions and bare-minimum entitlements at a base rate far below Australia's, for the same work.

The best thing you can do for your kids is save enough for them to move to Australia as soon as they finish Uni. Two greedy generations have ruined this country.

Plainly bureaucrats dominate government in NZ.
Policy implementation is sloth like. Ambition of policy is parlous enough without failure to deliver.
It seems to me that the detachment of Ministries from Ministerial control and constant subsequent reference to "advice" and "consultation" indicates that policy levers do not work.
All this originated as a problem from the neo-liberalisation of arms of government into quangos and private sector contracting and legal framework removing action from Ministerial direction. This is why DHBs role in CV19 was so crap and why they are getting abolished.

I remember the programme Yes Minister was around long before the DHB's appeared.
And it was Clark who introduced them.......

Robertson is setting up the "Ministry of Truth". Rewriting history to change the facts.......
Their propaganda can support how great and successful the "Ministry of Plenty" economic performance is.

When the population challenge the Newspeak and Doublethink, The Speaker can take them to "Room 101" for redirection using his new laws on freedom of speech. Or is he the Rat? It's all just too perfect.

Orwell would be most pleased.