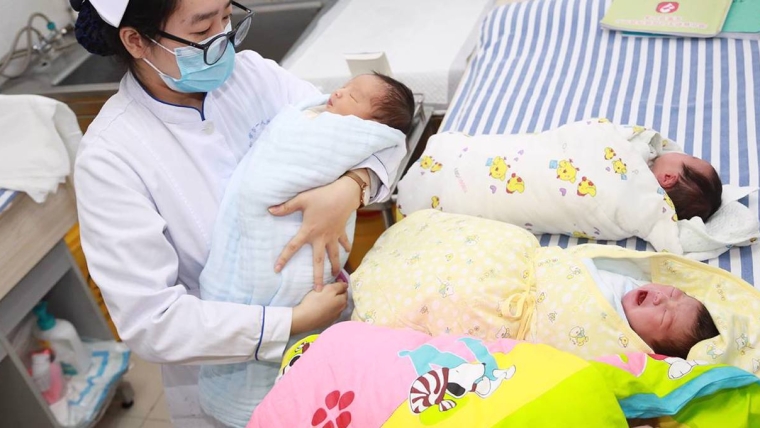 In an effort to address rapid population aging, China has just announced that it will allow all families to have up to three children. The decision comes on the heels of widely publicized new data showing that the Chinese fertility rate in 2020 was only 1.3 per woman, which is similar to that of Japan (1.36 in 2019) and notably lower than that of the United States (1.7).

But a below-replacement fertility rate is only one part of China’s demographic problem. A second issue is the sheer size of its older population. Before 1971, Chinese family-planning policies were pro-natal, restricting access to contraceptives and family-planning education. As a result, the country’s current or soon-to-be elderly population has grown particularly large: the size of the population aged 15-24 is only around 72% that of those aged 45-54, compared to 79% in Japan and 100% in the US. This top-heavy demographic structure makes the problem of declining fertility even more acute, because new, younger workers are needed to replace those who will retire and require support.

A third issue is urban-rural inequality. China’s rural population is generally prohibited from moving to urban areas by the country’s hukou system of residency permits. Rural residents thus have had fewer opportunities to access education and health care. In 2010-12, the urban enrollment rate was 100% for middle school, 63% for high school, and 54% for university; in rural areas, it was 70%, 3%, and 2%, respectively.

Chinese policymakers tend to discuss each of these issues separately. But that is a mistake. Low fertility, the legacy of pro-natal policies, and rural-urban divides all affect a population-age structure that has a direct bearing on China’s long-run economic development.

Economic growth depends heavily on the quality of the labor force. If workers cannot access health care or acquire skills in school or on the job, the economy will suffer. Worldwide, differences in worker quality can explain around half of all cross-country differences in income and growth.

Telling Chinese couples that they may have three children will not automatically increase the fertility rate, nor will it necessarily help with the larger economic challenge. Fertility is determined by socioeconomic factors such as the cost of raising children and the economic opportunities that parents foresee for their offspring. Those costs are extraordinarily high in urban China, where residential real estate is more expensive than in any other country at a similar income level.

Moreover, academic competition is intense. Children and their parents begin feeling the pressure of the nationwide gaokao exam for university admission in primary school. A 1999 reform that expanded the number of university slots could have partly relieved this pressure, except that job growth has not kept up; unemployment rates for college graduates have duly increased.

Urban parents also face the burden of caring for their own aging parents. This is no small task in a country where pensions are limited, and where few people move to retirement communities later in life. Most aging Chinese expect their adult children to care for them. And because the one-child policy in place from 1979 to 2016 was enforced more strictly in urban areas, most young urban parents grew up as only children. With no siblings to share the load, couples can expect to spend the next one or two decades caring for four aging parents in addition to rearing their own child. Adding two more children would increase the average couple’s dependents from five to seven.

By contrast, fertility is higher in rural areas, and the cost of rearing children is lower. Housing is cheaper, and the fact that there are fewer schooling opportunities means that parents can worry less about the costs of education. Rural Chinese of childbearing age are much more likely to have siblings with whom they can work together in caring for elderly parents.

Under these circumstances, allowing families to have three children without also making other changes would likely not achieve the intended economic result, and could even make things worse. With the urban population unlikely to have many more children unless the financial burdens of child-rearing and elder care are reduced, it is only rural fertility that will increase. And without improvements in rural health and education, the size and share of the unskilled working population will grow.

A labor force with a growing share of unskilled workers is the last thing China needs as it strives to push the frontiers of technological innovation and advance beyond middle-income status. While improving schools and public health in rural areas is straightforward (albeit expensive), generating employment for the graduates will be much more difficult. And without employment, young people will not be able to help support the aging population.

Chinese policymakers have shown awareness of some of these issues. In addition to increasing the fertility limit, they have acknowledged the need to reduce housing costs and to provide education subsidies. But these proposals remain vague, because there really are no simple solutions. Chinese policymakers will need to be mindful of the economic ramifications of the country’s demographic trends in tandem with its rural-urban divide – and take care to avoid making a difficult problem worse.

A bit reminiscent of the Wizard of Id. Whereby the good King of Id addresses his good peasants with good news and bad news. Firstly the bad news, I am going to nationalise all your pension funds. Secondly the good news, you will now all be allowed to work until you are ninety. QED!

Perhaps the rules will change as automation continues - ever burgeoning young workforces should become less important.

Maybe you are correct, China will not rise much further. But have you considered the developed world could sink below China?
If other countries buy fewer NZ exports we would become poorer but generally survive since we can easily feed ourselves but the UK? Netherlands? Germany? The developed world depends on infrastructure - what if it falls to pieces and is too expensive/difficult to repair? Like the end of the Roman empire.

Yes, I suspect the West will decline. But not to a level beneath China.
Demographics is destiny.

There is only one way to see to it that women bear more children, and that is to deny them the rights to determine their own paths in life, deny them control of their own fertility. Women unshackled from childbirth choose fewer births, they start later and those that have other ideas can choose to bypass the whole thing.
This is how we reduce the world's population so that we can actually have a healthy (hopefully) planet to live on, along with all the other species that call this place home.
We are in the unique position of being able to use technology to assist us in this transition.

The more educated the women get in China, the less kids they will have. Also the amount of pollution that country is now pumping out must be having an effect on fertility rates. Its so bad over there you can hardly see across to the other side of the street sometimes. Its obviously killing thousands of them a year directly with lung disease related illnesses but perhaps they are being basically poisoned as well and its resulting in high infertility rates.

Phthalates and other endocrine disrupting chemicals have reduced fertility in humans markedly in recent times. Such that a researcher in this field estimates most humans will need assisted reproductive technology by 2045, only 25 years from now. And that the human race from excessive chemical load and endocrine disuptors will cease to be able to procreate at all by 2150. So 130 years to go and that's us done!

Guess the problem ignored by this anthropocentric research, is that the other species we "share" the planet with will be likewise affected. Who's going to apply "assisted reproductive technology" to their survival prospects?